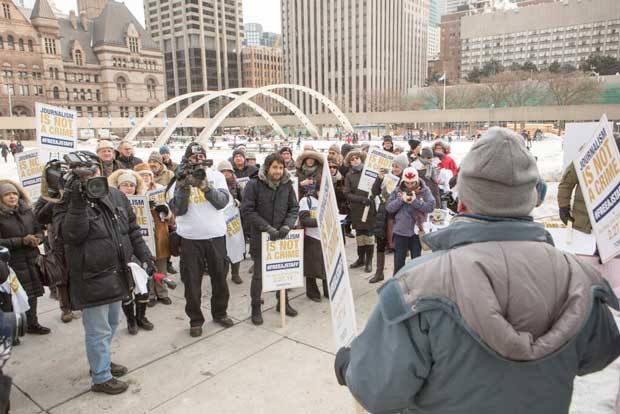 By Kelly Townsend and Glyn Bowerman

Chanting protestors gathered media attention at Nathan Phillips Square today in an effort to raise awareness about the arrests of three Al Jazeera journalists in Egypt.

Peter Greste, Baher Mohamed and Canadian Mohamed Fahmy were working as correspondents in Egypt when they were arrested on Dec. 29, 2013, on the suspicion of producing false news and helping the Muslim Brotherhood, which had been recently declared a terrorist group by the current Egyptian government.

Al Jazeera English organized the vigil outside of Toronto’s city hall as part of the media organization’s Global Day of Action.

Major media organizations such as BBC and CNN have publicly condemned the arrests and continued incarceration, as well as major political figures such as U.S. President Barack Obama.

Belgraver says one key voice that has remained silent is Canada’s federal government. “What we want to hear from the foreign minister, given the fact that Mohamed Fahmy is a Canadian citizen, is a public statement.”

Greste, Fahmy, and Mohamed are currently scheduled to attend a hearing on March 5, and are expected to continue to deny all charges.

CJFE executive director Tom Henheffer says if they are charged, the journey to have them released will be much more difficult.

LISTEN: Henheffer on the efforts to raise international awareness

AJE says the hope is if there is enough international pressure, the Egyptian government will drop all charges.