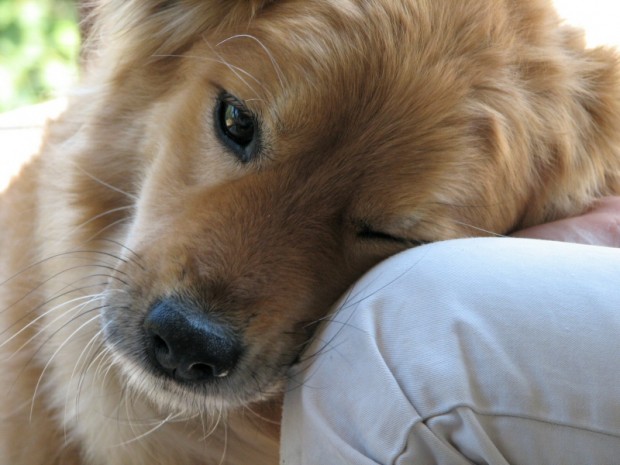 A dog named Ginger rests its head on its owner’s granddaughter’s leg.

A new study published this month finds more evidence that dogs are more like humans than we previously thought.

Researchers in Hungary found that a dog’s brain has the same emotional response as the human brain.

Sounds like cries or laughter made canines react the same way as humans, suggesting that that’s the reasoning for dogs having an emotional connection with people.

The Comparative Ethology Research Group at the Hungarian Academy of Sciences played the same audio to both humans and canines, and the dogs reacted the same way as the humans.

Eleven dogs participated in the study, but the researchers had to train them first. After several sessions, they then were put through MRI scanning.

In comparison, 22 human volunteers were also put through MRI scanning.

Dana Cox, the editor-in-chief of Canadian Dogs Annual said the findings of this study aren’t surprising at all, especially after finding out that dogs have been apart of human’s lives for over 32,000 years.

“With dogs now able to detect an epileptic seizure before it happens, and helping humans in so many capacities, I think we’re at the tip of the iceberg in terms of our relationship with our canine friends,” said Cox, whose magazine is based in Peterborough, Ont.

She also added that her own dogs have had an emotional connection and reaction to her and her family.

Cox said that when her daughter was quite young, the family owned a Siberian Husky who would react to the baby’s cries and often comforted people when they seemed to need it.

“If you were having a bad day, she would come over close to you and put her head down very close, not to be petted but to console,” she said.

The Hungarian Study also found that dogs are very good at being in tune with people’s emotions and people can also sense a difference in their dog’s mood, but they are now understanding what makes this possible.

Kimberly Daniels is the Service Director for HSF and is in charge of management and execution of HSF’s north campus services.

She arranged to have dogs brought into Humber for Mental Health Awareness month so students can relieve some stress and play with the dogs.

Daniels is a dog owner herself, and said she was given the idea for a dog by her doctor.

“I was in a really bad motor vehicle accident and I suffered from anxiety and depression,” she said.

Her doctor recommended getting a dog to help with her anxiety and depression, and has had her dog for the past four years.

Her personal experience and canine connection sparked the idea of dogs come to Humber and help students.

The Comparative Ethology Research Group is planning to continue on with their canine research, and their next step is to see how they respond words.