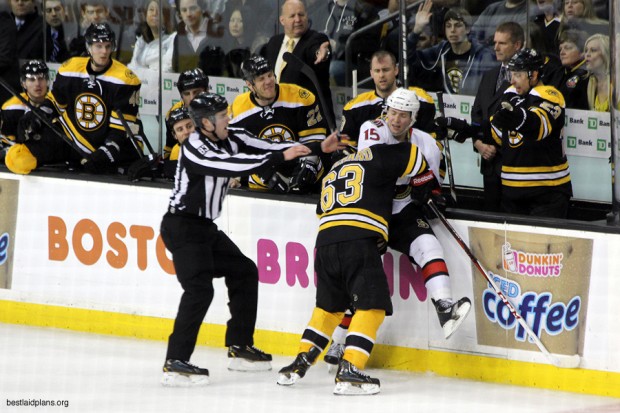 The sight of a bone-crushing hit to the head has become an accepted feat in the National Hockey League, despite the life-threatening repercussions.

Dr. Michael Cusimano, a neurosurgeon at St. Michael’s Hospital, shook the hockey world Monday morning, when his study, published in the British Medical Journal’s Injury Prevention, found that injuries over the past three seasons have cost the league approximately $653 million.

From 2009-2010, of the 1307 eligible NHL players, 63 per cent have missed one game due to a hockey-related injury. Cusimano believes that improving player safety would be beneficial to the players.

“I think the NHL could improve player safety by reflecting on what injuries mean to the players, the league and to the sport from a personal level, a medical level, but also a financial level both in the short term and the long term,” he said.

The neurosurgeon added that these excessive costs transform into a financial burden that fans encounter on a yearly-basis.

“These kinds of points should matter to fans because this cost of doing business gets transferred down to the fan and they feel it when they buy merchandise, go to games and they’re basically paying for this kind of cost.”

According to Cusimano’s study, leg and foot injuries are the most common, and are responsible for roughly 30 per cent of a player’s total cost of unearned salary, at approximately $68 million. Head and neck grievances were close behind with $58 million. During the three-year period, 323 incidents were concussions and 88 per cent stemmed from violent acts.

“There are a multitude of rules need to be changed or addressed,” Cusimano said. “Probably the most popular example is the head-hitting rule that can be addressed. Another one would be rules around fighting since these are two of the major mechanisms that lead to things like brain injury.”

Cusimano feels that adjustments to the modern-day rules could lower costs, and prevent further harm to players around the league.

Registered kinesiologist and Humber College instructor, Fabian Rayne, believes preparation through off-season strength and conditioning training, which focuses on resistance or cardiovascular endurance can reduce your risk of injury.

“If you’re playing a contact or highly-explosive sport, preparing your body for that stressor is vital,” Rayne said.

Ultimately, insurance covers 80 per cent of a player’s salary after 30 days, and owners are responsible for compensating players prior to that. Cusimano understands that changes need to be made to the league, but not at the expense of the players’ well-being.