Metrolinx expects Eglinton Crosstown to be ready by 2020 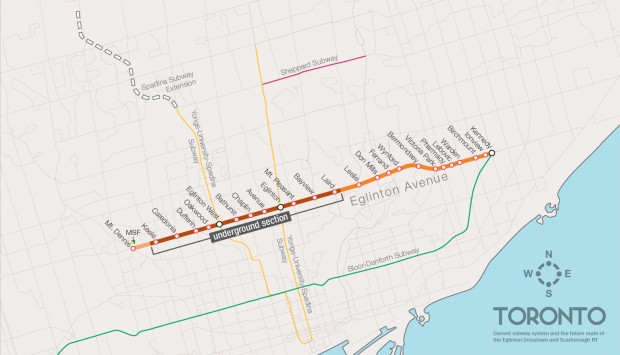 Photos courtesy of Metrolinx at http://www.thecrosstown.ca/

Metrolinx confirmed on Friday that the Eglinton Crosstown light-rail transit project is on track to be fully operational by 2020.

Jamie Robinson, the Director of Community Relations and Communications for Toronto Transit Projects at Metrolinx, assured that the project, which is causing plenty of disruption on Eglinton Avenue, remains on schedule.

“Clearly, when you’re dealing with a large transit infrastructure project like the Eglinton Crosstown, you’ve got many construction challenges.”

The $5.3 billion transit infrastrature project will link the west and east ends of Toronto from Mount Dennis to Kennedy stations along Eglinton, a major arterial road that cuts through the heart of the city.  The 19 kilometre light-rail corridor includes 10 kilometres that runs underground from west of Keele to just east of Laird. The Crosstown project will include 27 stations including links with the Yonge-University-Spadina subway line at Eglinton West and Eglinton stations.

“Very soon in 2014, we’re going to be beginning construction of our launch shaft on the east side of the tunnels, which is over at Brentcliffe Road, sort of around Leslie Street.” Robinson said. “It takes about a year for us to construct the launch staff for the tunnel boring machines there.”

Robinson said construction on headwalls for underground stations will be underway at Laird, Bayview, and Mount Pleasant in 2014.

Work zones must be established along Eglinton Avenue in order to complete each of the underground stations. This reduces traffic to one lane in either direction down from two lanes. Parking is restricted in areas along Eglinton and prohibited in construction zones.

“While folks think that because we’re tunneling, all that work is underneath the surface, where we’re constructing the station headwalls, a lot of that work does take place on the surface,” he said.

Elia Ferreira is the owner of Xcel Dental Laboratory located on Eglinton Avenue in Toronto. She said the construction doesn’t affect her business although it does have an impact on traffic and makes it difficult to park. Ferreira said the construction of the Crosstown will be worth it in the end. “Eventually, we all have to put up with a little inconvenience to make things better.”

Buses will no longer travel on Eglinton upon completion of the project. Metrolinx expects the new Eglinton Crosstown project to have a ridership of 5,400 people at peak hours.

Robinson said all of the tunneling activity that is underway now will be completed by the summer of 2016. Metrolinx is currently in the market to find a private sector partner to finish construction on the stations, signals, and the track. This part of the project will run from 2015 to 2020.

Ongoing construction will continue on Eglinton between now and completion of the Crosstown in 2020.