Ford invite to Board of Trade dinner called ‘unintentional’ 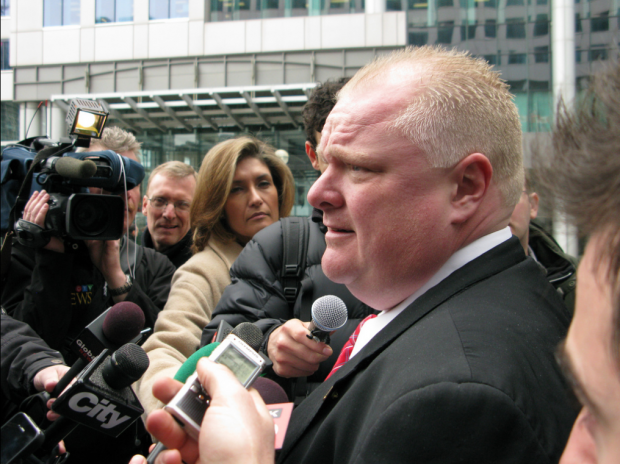 The Toronto Region Board of Trade insisted Tuesday that a mistake had been made in inviting Mayor Rob Ford to a dinner Monday night that he ended up leaving early, following comments about his leadership.

Ford arrived unexpectedly at the dinner and left after Carol Wilding, president of the board, delivered her speech to the 1,300 people in attendance.

Wilding slammed the current state of civic leadership in the city, saying that the challenge of the business community is to use economic leadership to bring about international success, thestar.com reported Tuesday.

“Regrettably, we were, and remain, preoccupied with the question of leadership within the region,” said Wilding.

“And talk on the street is all about perception. The perception is that, on aggregate, our region’s advancement took a step backward in 2013. That perception is supported by too many distractions, all of which you are familiar with.”

“It appears that there was an invitation sent out, unintentionally, that’s dated Nov. 11, which is ten days after we asked him to step aside,” Brownrigg told @Humber’s Natalie Stoberman.

“Obviously it would be a little bit disingenuous to ask him to step aside and then invite him to our annual dinner.”

He also told @Humber that he is still looking into whether or not the letter in Mayor Ford’s photo is an original or a copy.

Thanks to Carol Wilding, President of the @TorontoRBOT for taking the time to personally invite me to tonight’s event pic.twitter.com/KnR9k8l0Nl
— Mayor Rob Ford (@TOMayorFord) January 28, 2014

There was some confusion as to whether or not Ford was invited to the dinner.

@Humber reporter Espe Currie was at the dinner and said that Ford was “blank faced” in the wake of Wilding’s comments.

According to The Star, the Trade board spokesperson Scott Brownrigg said Deputy Mayor Norm Kelly was invited in Ford’s place.