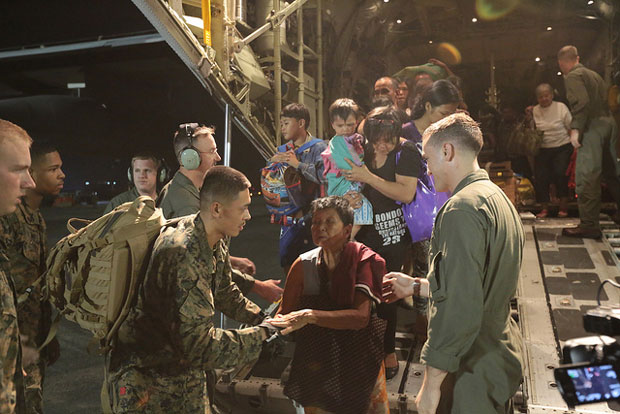 Relief aid totalling tens of millions of dollars is being sent to the Philippines after Typhoon Haiyan, but the country is struggling to get that aid to those who need it most.

Many of the Philippine islands are covered with debris from fallen structures, and bodies are still laying in the streets, making relief efforts difficult.  Rescue workers have been able to reach some of the hardest hit areas, but many still remain inaccessible.  Adding to the difficulties Tropical Depression Zoraida is passing over the Philippines and posing a threat to the relief effort.

Canada’s Disaster Assistance Response Team, known as DART, have deployed to the Philippines. They will work together with Filipino relief agencies to where they can be of assistance.  Most people are without food and water, shelter is at a minimum and almost half of the affected islands are without electricity.

The scene is devastating for Rosalinda Cerrudo-Javier, president of The Filipino Centre Toronto.  She experienced typhoon destruction when she lived there for her first 27 years, but never to this degree.

“When I lived in the Philippines and we had typhoons, it was almost celebrated amongst us kids because we got the day off school,” Cerrudo-Javier said to Humber News. “I’ve never seen it as bad as this.”

Cerrudo-Javier is organizing goods to be sent to the Philippines hopefully within the month.

“It’s impossible to send anything now,” she said. “Everything is torn down and getting supplies there is very difficult and expensive.”

“Right now very few large organizations, like the Red Cross, are able to bring goods, but for those of us who want to send goods and need to organize our own transportation, it’s nearly impossible,” she said.

“Blockages need to be fixed because at this point in time I’m hearing that the ocean is the only open way to transport supplies and the oceans are blocked with debris,” she said. “Most airports are blocked, railways and roads are sparsely accessible.”

Nirupama suggested food drops as a possibility to get food and water to people while they wait for debris to be cleared.

“There needs to be an open line of communication between local agencies and international ones that are now sending supplies to the Philippines to see where supplies need to go,” she said.

Speaking about the communication problems before Typhoon Haiyan, Nirupama said, “reports from tourists and locals on smaller islands say they had no idea a typhoon was even coming and that’s a big issue.”

While they wait until they can safely send their donations, Cerrudo-Javier said the centre will continue collecting goods.

“It gives us time to collect as much as we can and hopefully send a larger quantity of goods when things clear up.”