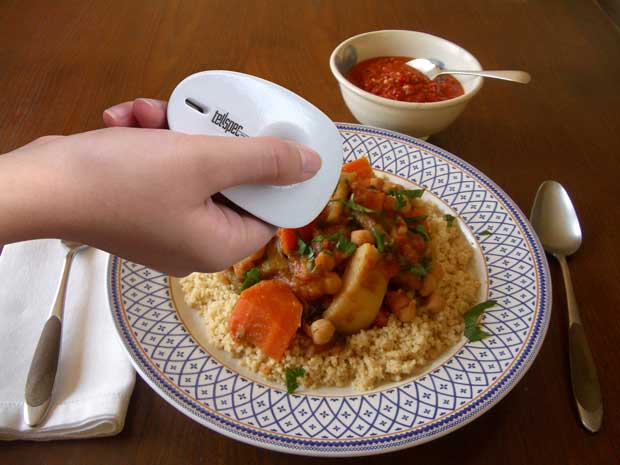 Toronto based company, TellSpec Inc., has launched a crowdfunding campaign to create a scanner and companion app that will tell you the chemical makeup of your food. COURTESY TELLSPEC.

Toronto-based  TellSpec Inc. has launched a crowdfunding campaign to create a scanner and companion app that will tell you the chemical makeup of your food.

Isabel Hoffmann, founder and CEO of TellSpec, launched the project with Stephen Watson, a math professor at York University.

The idea came to Hoffmann because her daughter was struggling with an unknown illness.

“My daughter had been sick for one whole year and doctors couldn’t diagnose her, and she eventually had to drop out of school,” Hoffmann told Humber News.

“They diagnosed her with chronic Lyme disease, and I went out of my way to test her before she went on the medication. All the results came back negative, and so we took her to an allergist in California. Tests came back positive for mold, which is linked to penicillin, and she is extremely allergic to both. We had mold in the house, enough so that it was causing her illness. We had to move and give her a proper diet, which she could eat without getting sick,” said Hoffman.

“I am going to help people going through the same process as my daughter,” added Hoffman. “The suffering is just too much, and we basically started looking at how we were going to do this.”

The product will list exactly what is in food, including any dangerous or banned chemicals, as well as common or potential allergens, like gluten and eggs.

TellSpec will have a scanner that analyzes the food for information. “The spectrometer reads based on laser light, and the food behaves in different ways based on its reactions to the light,” said Hoffmann. “The information is then sent to the cloud where it does the analysis and then it’s sent back to the phone.”

So far Hoffmann has received very positive feedback. “I don’t feel alone, I feel like that there is an amazing network that wants us to succeed. We’ve been working for the past year and I knew the impact could be huge…but I never suspected how huge.”

“We have had such incredible interest in the product,” Gisele Waters, customer experience and analyst for TellSpec told Humber News. “We are almost close to what we need for funding.”

“Don’t we want a healthy planet?” said Hoffmann. “This is the power of crowd funding. We give the information and then it’s up to the people to decide if they want to eat it or not.”

Despite contacting various food technology experts and engineers, all requests for interviews were declined until more information is released and studies are completed on the product.

TellSpec said the device is expected to be available to the public by August 2014.