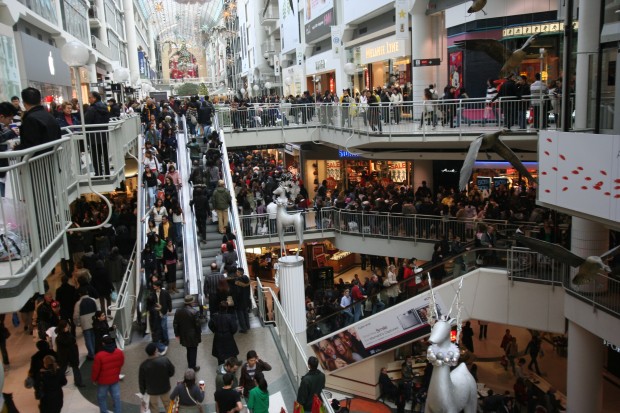 The survey revealed 89 per cent of Canadians have difficulty buying gifts.
SOURCE: Wikipedia

While the 2013 holiday rush is underway, two thirds of Canadians find it difficult to shop for specific people, according to a new study done by Staples Canada.

According to certain demographics, the stats showed the most difficult people to buy for are fathers, leading with 57 per cent, followed by in-laws and extended family.

Fifty per cent of all participants also said gift giving is difficult, because people often run out of ideas. Valerie Outmezguine, a public relations specialist from Staples Canada, told Humber News 60 per cent of holiday shopping time is spent searching for gifts for people who are hard to buy for, making it stressful.

“It’s an interesting study, because it reflects what shoppers are going through,” she said.

The study was conducted from Oct. 31 to Nov. 1 2013. Over 1500 participants were randomly selected to complete a survey via Vision Critical, a third-party survey firm.

“Of course it’s stressful, because they (people) wait till the last minute,” said Hunter. “They make it stressful on themselves since they have to shop for everyone all at the same time.”

Hunter also said some people lose track of time, and don’t save up enough pay cheques to buy extravagant gifts, which sets a budget on gift spending.

Ultimately, acknowledging the interests of the recipients is a good way to choose gifts, according to Hunter.

“It all comes down to knowing your friends and family,” said Hunter.

Anna Miller, a first-year cosmetic management student at Humber told Humber News, “I find it difficult to shop for boys specifically, I’m pretty good with girls. Just because I’m a girl, I know what to buy for other girls.”

Miller also said she has difficulty buying gifts for her dad, boyfriend and brother.

While the stats from the study prove it’s hardest to shop for fathers, a few students may find it easier.

Alicia Santangelo, another first-year cosmetic management student told Humber News she knows what kind of gifts her father would like to receive.

“Every time I’m wearing a certain something, my dad always says he likes it and wants it, so I kind of go off of that,“ said Santangelo. “Plus, I know what he likes, so I guess it’s based on a personal relationship.”