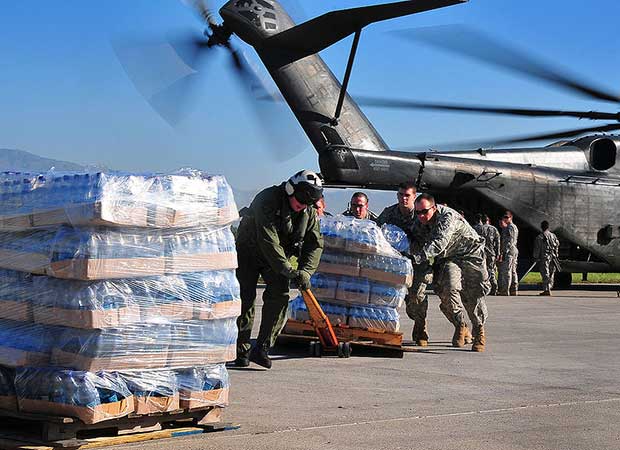 Six days after Typhoon Haiyan struck the Philippines, relief efforts are underway to help the people affected by the disaster.

Humanitarian organizations are calling on Canadians to donate any money they can to help the relief effort.

Relief efforts after the 2010 Haiti earthquake.

Since the storm hit on Nov. 8, Global Medic has had volunteers on the ground in the Philippines. They are trained from previous missions and have water purification units, Budziak said.

“Tomorrow morning we’re going to be sending out our next team and that’s going to be a nine member team.”

Oxfam Canada is another organization aiding in the relief efforts and seeking donations from Canadians.

“Our target in the Philippines is to reach half a million people with the emergency assistance. Our priorities are to reach the most vulnerable families with safe water and sanitation facilities,” said Melanie Gallant, who works in media relations for Oxfam Canada.

In the first phase of relief efforts, Oxfam is sending a vehicle to Tacloban with the hopes of distributing emergency water supplies. This phase should reach approximately 20,000 people, said Gallant.

“The affected provinces are the poor provinces with about four or 10 families living below the poverty line,” said Gallant.

“Even before the disaster hit, most of these people have no savings and will have lost all of their assets.”

“At this stage of the emergency relief the best and most effective thing Canadians can do is to donate cash to a reputable organization that will ensure the money makes it to the people that need it the most.”

Students who are strapped for cash can still help the Philippines.

The donations collected will be given to the Our Lady of the Assumption Catholic Parish, who will send the supplies to the Philippines.

“I think a lot of time when you’re donating non-perishable food and clothing, these are things that you maybe have already that you’re thinking of discarding,” Tara McDonnell, president of the Liberal Club told Humber News.

“You’re donating things that might not mean that much to you, but they’re going to have such an amazing impact on other people.”

Where you can donate

As part of the Canadian government’s relief effort in the Philippines, the Disaster Assistance Response Team (DART) was deployed to affected areas of the country.

An advance team left Trenton, ON. for the Philippines on November 11, 2013. The main body of DART followed on Nov. 13. The team comprises about 50 people, including engineers. Pallets of rations and equipment accompanied the team.

According to the Canadian Forces, DART is a military organization designed to provide primary medical care, engineering help and clean drinking water. It is able to conduct emergency operations for up to 40 days and has been used numerous times since the late 1990s. Below is a time line highlighting past DART operations. Information from the Canadian Forces:

Below is a time line highlighting past DART operations.
Information from the Canadian Forces: forces.gc.ca