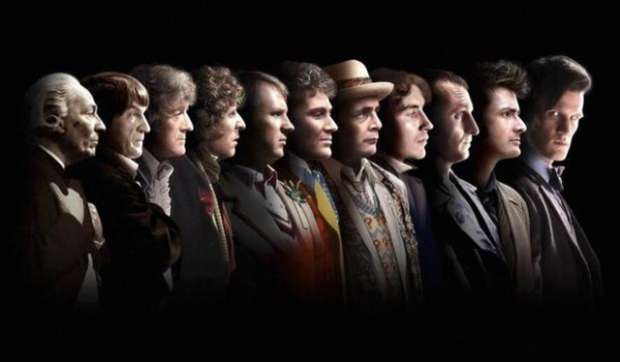 By Megan Rach and Kara Matthews

Doctor Who was broadcast for the first time ever on Saturday Nov. 23, 1963 at 5:15 p.m. on Britain’s BBC One.  Co-created by Sydney Newman, a Canadian TV producer and the BBC head of drama, it was originally meant to be an educational science-fiction family show.

LISTEN BELOW: Interview with Doctor Who experts Antony Wainer (Doctor Who Appreciation Society) and Cindy Peters (Doctor Who Society of Canada)

According to the official Who site, now fifty years later an estimated 80 million viewers in 206 countries watch the show. In 2009 Doctor Who was named by the Guinness World Record as both the longest running science-fiction show, and the most successful.

Doctor Who was originally intended to be an educational series when BBC Head of Drama Sydney Newman realized the gap in the Saturday evening schedule in 1962.

Newman came up with the idea of a time-traveling alien, the mysterious “Doctor”, whose time machine was ‘bigger on the inside’ due to his Time Lord technology. When it came to the Doctor and his TARDIS (Time and Relative Dimensions in Space), the rest was history. It was also the future…and the present. When it comes to the Doctor, it’s all a little “wibbly wobbly timey wimey”.

The TARDIS By Steve Collis from Melbourne, Australia (Doctor Who Experience Uploaded by russavia) [CC-BY-2.0 (http://creativecommons.org/licenses/by/2.0)], via Wikimedia Commons

While the TARDIS was originally envisioned to take the form of an object from the particular time period the Doctor travelled to, the show’s budget was calculated and it was discovered that was too expensive to continuously re-dress the TARDIS for each new episode. From there, the “Chameleon Circuit” busted and the TARDIS became the now-iconic blue police box.

“Doctor Who had something of a difficult beginning. The first episode of the show, “An Unearthly Child,” was broadcast on Saturday 23 November 1963, the day after the assassination of John F. Kennedy, which several historians have claimed somewhat overshadowed its launch,” said Masters candidate at Innis College, Miriam Siegel.

Although the first episode was rebroadcast a week later, it was the second episode, The Daleks, that caught the attention and imaginations of viewers.

“The show achieved something of its status as a cultural phenomenon almost immediately. Doctor Who was initially produced in a serial format – a single story told over anything from two to ten weekly episodes. The show’s second serial introduced what would become its defining villain, and The Doctor’s arch enemies – the Daleks, a genetically engineered race of once-humanoid but now machine-bound creatures devoid of all emotion save for hate of anything that isn’t Dalek,” said Siegel.

As time went on, the programme became a success, drawing in audiences of 12 million or more. The Daleks became a staple, featured in many more episodes since as the Doctor’s main nemesis.

By Keven Law from Los Angeles, USA (Take me to your leader…) [CC-BY-SA-2.0 (http://creativecommons.org/licenses/by-sa/2.0)], via Wikimedia Commons

After 50 years, Doctor Who has become the world’s longest-running science-fiction television programme.

How does a programme stay on television for 50 years with the same titular character?  The science is simple: regeneration.

“the show was and still is consistently able to reinvent and renew itself. This is partially written into the title character: The Doctor’s ability to regenerate, to change his body (and thus the actor who plays him) while remaining the same man affords the show the unique opportunity not only to continue after the loss of a lead actor (something unimaginable in other television dramas – what is House without Hugh Laurie, or 24 without Kiefer Sutherland?) but to transform itself while staying true to the core of its premise,” said Siegel.

Two hearts, the ability to read an entire book at one glance, and the process of regeneration sets the race of the Time Lords apart.

Regeneration starts when a Time Lord incurs an injury that can not to be healed – in other words, when a Time Lord is about to die from injury. A process starts in which the Time Lord’s body begins to heal itself by recreating itself.  Thus, resulting in a completely different body with different mannerisms and character traits, but the same memories.

The Doctor explores the universe at random, using his knowledge of science, technology and history to help avert the crisis which he comes across (and he always ends up in the centre of a crisis).

Almost always accompanied by a companion, the Doctor pilots the TARDIS through time and space.

Since its inception in 1963, 11 men have portrayed the Doctor. As each actor moves on from the role, another takes the place. This Christmas, Matt Smith will leave his post as the 11th Doctor as Peter Capaldi will take his place as 12th incarnation of the titular Time Lord.

Check out this interactive timeline to learn more about the men who have portrayed our favourite Timelord.

The Lonely God, The Oncoming Storm, The Warrior, The Doctor

While the Doctor is generally the hero, it is no secret that even he has his secrets and his demons to face. He generally remains quiet about his darker past. His biggest issue is the mysterious “Time War”. As far as anyone else knows, the Time War is the darkest moment in the Doctor’s entire 1,200-year life. The entire race of the Time Lords was wiped out during the war, in an effort to defeat the Daleks.  No one knows exactly what happened in the Time War – until now, 50 years after the Doctor first began his adventures in his stolen TARDIS.

The Regeneration of a Series

In 1989, Doctor Who was discontinued on BBC Television.  While it lived on in audio, novels and comics, the first attempt to bring it back to screens wasn’t until 1996.

BBC partnered with Universal Pictures to kickstart the show again, resulting in the 1996 feature length film.  The film, featuring Paul McGann as the 8th Doctor, was ultimately unsuccessful in generating enough interest to restart the show, despite McGann’s arguably exemplary portrayal of the Doctor.

The show remained off the air for another nine years.

After nearly 16 years, Doctor Who was given another trial in 2005. Christopher Eccleston played the Doctor’s ninth incarnation for only one year – but that single year was enough to bring the television series back to life.

Doctor Who is currently in its 33rd season, and the 50th anniversary special is getting a limited worldwide theatre release in 3-D while simultaneously aired on television. The special features current Doctor (Matt Smith) and companion Clara Oswald (Jenna Coleman), as well as the War Doctor/the Warrior (John Hurt). Fan favourites David Tennant and Billie Piper will also be reprising roles in the special. They previously played the tenth Doctor and Rose Tyler, respectively.

Steven Moffat, current showrunner and writer has described the 50th anniversary as “game-changing”, as it is the first time audiences will see the long awaited Time War.

As previously stated, Doctor Who is the longest-running science-fiction show on television. During its 50 year sweep, it has made an incredible impact on culture as we know it.

A surprising amount of pop culture holds references to the show (from television/movies, video games, comic books, to novels). NBC television show, Community, even has it’s own homage to the Doctor called “Inspector SpaceTime”.

Daleks are an “easter egg” included in an episode of Rugrats.

The theme song has become one of the most easily recognizable theme songs from television, and words like “dalek” and “TARDIS” have made their way into the Oxford English Dictionary.

According to Mike Juddery, writer on website, mental_floss, Doctor Who changed the genre of science-fiction.

“Doctor Who was a major influence on British science fiction television, which is very different from the American sci-fi. For starters, British producers didn’t have the budget for great special effects or sets, so instead they focused on imaginative scripts, finding creative ways to do cheap effects and building alien sets that made the plastic planets on the original Star Trek look realistic. In fact, were it not for the success of Doctor Who, British science fiction might be very rare indeed. Without Doctor Who, we would never have had such cult sci-fi shows as Blake’s Seven, The Hitchhiker’s Guide to the Galaxy, Red Dwarf and Life on Mars. Even many of Britain’s non-sci-fi comedy and drama series were Who-influenced,” wrote Juddery.

“For many fans I think the impact has been strangely similar. Everyone who watches a television show or movie will take something different away from it depending on their own histories, personalities, and cultural backgrounds, but Doctor Who seems to have generated a great deal of stories about how it has inspired or even helped shape the minds of the people who watched and continue to watch it,” Siegel said.

In an effort to build anticipation for the Special on Nov. 23rd, a mini episode was made, explaining some loose ends that needed tying up.

*Warning: if you are not caught up on this recent season of Doctor Who…

Whether you’re a “Newvian” or fluent in the ways of Classic Who, Doctor Who is a universal phenomenon. For 50 years, viewers have watched the Doctor take on Daleks, Cybermen, Weeping Angels, and many, many more every Saturday night. Doctor Who has transcended the generational gap and become a household name worldwide.

Here’s to another 50 years, Doctor – they’ll go by in a flash. And a word of advice to Whovians everywhere…

For a more detailed look at Doctor Who, you can read the entirety of Miriam Siegel’s interview here.