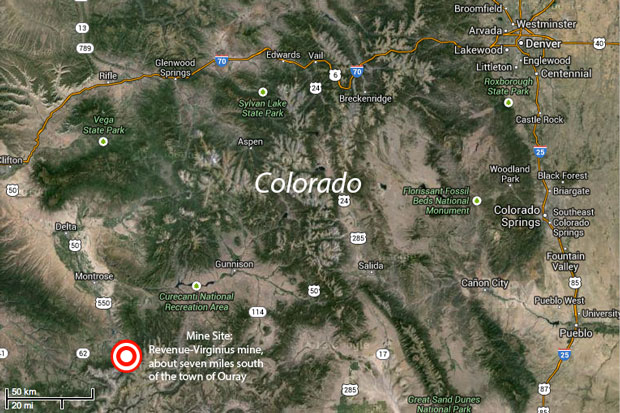 Graphic by Jake Kigar with map provided by Google Maps

Two workers are dead and 20 others injured after a mining accident near Ouray, Colorado.

Amy Louviere, chief of public affairs for the United States Mine Safety and Health Administration said, “a foreman and one miner were overcome by gases following an explosives accident.”

The accident occurred just after 8 a.m. Sunday in the Revenue-Virginius silver mine, just 270 miles southwest of Denver.  The two men identified by county officials are 34-year-old Nick Cappanno and 59-year-old Rick Williams.

“Other miners in the area evacuated the mine,” Louviere said. “Mine rescue teams were dispatched and brought the victims to the surface at 2 p.m.  Five miners were transported to hospitals, three were released and two are being kept for observation.”

Both Cappanno and Williams were pronounced dead in the mine of carbon monoxide poisoning.  The source of the deadly gas isn’t apparent at the moment, but the Mine Safety and Health Administration said they are currently investigating.

Katherine Bruce, program coordinator of the mining engineering technician/technology program at Cambrian College said people need to wait until the investigation concludes to understand the situation, but safety is always an important aspect of mining.

“These events alter public opinion of mining and the safety of working conditions in mining operations – and we do try to have conversations with the students about causes and solutions when events occur,” she said.

According to the Mining Safety and Health Association, 27 people in the U.S. have died in mining related incidents between January and Sept. 30 this year. In a MSHA media release regarding mining fatalities, Joseph Main, assistant secretary of Labor for Mine Safety and Health said: “While actions undertaken by MSHA and the mining industry continue to move mine safety in the right direction, these deaths are a reminder that much more needs to be done to protect the nation’s miners and ensure they return home after every shift.”

Mining deaths have been on the decline and Bruce said according to statistics, mining is the second safest industry after education. “We have an excellent record and are continuously working to achieve zero harm.”

“Safety is infused throughout all of our courses and is a main component to our accreditation,” Bruce said.

She said mining students are challenged with being the leaders towards this goal – they are the next generation of mining professionals and are willing to take the necessary steps to making mining the safest industry.

“When you put safety first, everything else falls into place,” she said.

Star Mine LLC, the owners of the Revenue-Virginius silver mine, were not available for comment.