Cell phone calls in the sky a possibility 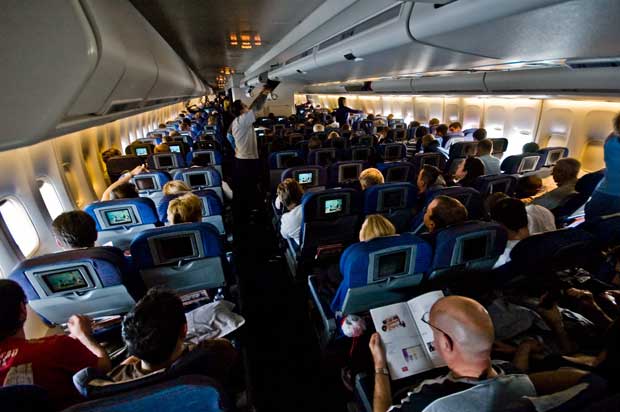 Screaming children and lack of legroom might not be the only thing annoying you on your next flight.

The Federal Communications Commission in the US is considering changing their rules to allow passengers to make phone calls on airplanes.

Courtesy Wikimedia Commons. The FCC in the States are considering changing their rules to allow passengers to make calls in the sky.

Canada may be next

This reconsideration of the rules is happening in the US right now but Canada may be next, said Dr. John Enright, Professor of Aerospace Engineering at Ryerson University.

“I would expect that if the FAA in the States decides on a particular direction there will be pressure for Canada to sort of adopt similar measures,” said Enright.

Cell phone calls in the air have been banned for fear of possible network interference between devices and the aircraft but there are ways to make calls with minimal safety risks, said Enright.

“I wouldn’t say it’s necessarily dangerous but the cell network is set up for a particular type of user which is typically someone on the ground.

‘They would have to change the way some of the cell networks are set up to support…people in the air,” said Enright.

Phone calls in the sky may not cause much of a safety issue but it may be an annoying distraction for flight attendants and fellow travellers, said Seneca Aviation Professor Andrew Kovacs, a pilot for a major Canadian airline.

“I fly a lot and I don’t need to hear somebody talking on the phone while they’re going from A to B,” said Kovacs.

A new distraction for travellers

In terms of customer accessibility on a flight, consultant Gregory is constantly on the go, flying to various places for work and said the ability to make a call in the air would make life a little easier.

“You can still take your laptop out and work but you can never really communicate with anyone: no wireless, no data, no phone connection,” said Mak.

Mak said he understands the pros and cons of having the privilege to make calls but points out that businesses might be skeptical of the policy change.

“When you’re on a plane it’s a public place . . . so if you’re working and you’re conducting confidential types of business while on the plane and now that you can talk on the phone I think that’s going to be a huge risk for businesses and companies,” said Mak.

It’s up in the air if Canada will implement airline phone service to all passengers but Enright said it comes down to customer satisfaction.

“Leaving aside take off and landing, which are sensitive periods of the flight, it’s mainly a matter of balancing the annoyance of a lot of conversation in a small, shared space and the convenience of maintaining productivity while you’re in the air.”