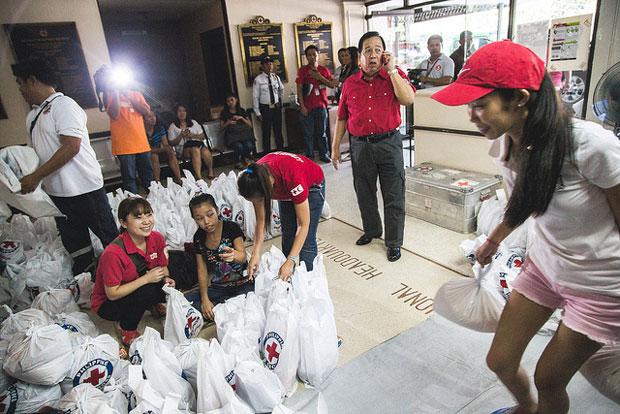 As the Philippines face the daunting relief effort after Typhoon Haiyan, the Toronto Filipino community is rallying to assist in any way possible.

The Category 5 typhoon, one of the strongest on record, struck the island nation on Friday, displacing over 600,000 people and killing at least 942.  Philippine officials estimate that the typhoon affected as many as 9 million people and the death toll could rise to as high as 10,000.

The disaster has left survivors with no food, shelter or clean water.

“We are pleading for all Filipino Canadians and Canadians to give us help,” Rosalinda Cerrudo-Javier, president and CEO of The Filipino Centre Toronto, told Humber News.

“We are bleeding from the inside, but we are up on our feet, asking anyone to open their hearts and help us.”

The Filipino Centre is asking Torontonians to bring non-perishable food items to the centre in downtown Toronto.

“We are collecting canned goods because they last a long time and will travel well to the Philippines,” Cerrudo-Javier said.

The Canadian government has promised $5-million, as well as to match any donations Canadians make between Nov. 9 and Dec. 8.

Pastor Rodrigo Felomino of the Filipino Alliance Church of Toronto told Humber News that the church is also “raising funds to send to the Philippines as well as clothing and other goods.”

Both the church and the Filipino Centre have said they are considering travelling to the country.

“We’re also looking into sending a team if possible in the next two or three weeks to provide aid,” Felomino said.

“We have three doctors at the centre and one of them is looking into a flight to the Philippines to assess the situation and figure out how we can send our contributions,” Cerrudo-Javier said.

According to City of Toronto census data, over 400,000 Filipino’s live in Canada, with almost 200,000 in Toronto alone.  Pastor Felomino said the affects of the disaster hit close to home.

“Three or four families in our church are directly affected by the tragedy, so the disaster is important to us,” Felomino said.

How can you help?

The Filipino Centre Toronto is asking contributors to bring canned goods to the centre at 597 Parliament St. Suite 103 in Toronto or call 416-928-9355.  They open at 10 a.m. and are staying open late to collect as many goods as possible in the coming days.

UNICEF Canada told Humber News in a statement that Canadians can help and their donations will go a long way. We are trying to spread the word for the sake of the children of the Philippines and their families.  Canadians can support relief efforts by donating at www.unicef.ca and calling 1-877-955-3111.