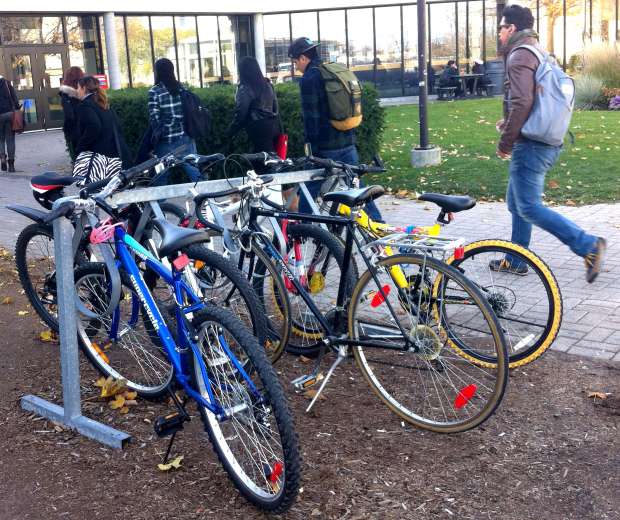 Students at Humber College support the use of helmets in adults. PHOTO BY RAUL A PINTO.

by Raúl A. Pinto

The Canadian Paediatric Society is asking all provinces to approve laws that make mandatory the use of helmets for cyclist of all ages.

A study released Friday, by CPS’s Injury Prevention Committee, said the lack of helmets in adult cyclists is “a leading cause of sport and recreational injury.”

At this time, Canada has mandatory use of helmets for children only in Ontario, Alberta and Manitoba. All residents of British Columbia, New Brunswick, Nova Scotia and P.E.I. are required to wear helmets while cycling. There is no legislation in the rest of the provinces and territories.

Dan Lambert is owner of Bikes on Wheels, a bike shop with locations in Kensington Market and on Queen Street. He told Humber News legislation on helmets for adults “is not a bad idea.”  However, Lambert said bike accidents are not only the responsibility of riders.

“In terms of safety legislation, it’s also good to make sure the cyclists have better infrastructure to get along with cars. I think connecting the use of helmets with accidents is missing the point slightly,” Lambert said.

“In many debates about this, I heard that in European countries like Denmark, cycling is very popular and safe because the streets are safe. And people there don’t wear helmets,” he adds.

Haris Raval, third year nursing student at Humber College, rides his bike to school every day. He lives nearby, and told Humber News “I would definitely support legislation about helmets.”

“The only problem would be during the wintertime, because we also need to wear something to keep us warm, so we need to be cautious about what to wear during those days,” said Raval.