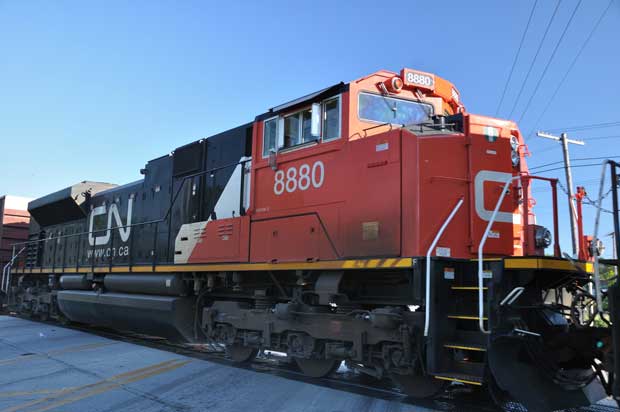 Two recent CN derailments had some experts on Monday warning against the shipping of dangerous goods by rail, notably crude oil.

At least six cars derailed about 30 km outside of Saskatoon on Saturday night, and more than 40 cars derailed outside Fort Frances, Ont., early Monday morning. Neither derailment involved dangerous goods or significant environmental concerns, a press release from CN said.

Keith Stewart, an energy campaigner with Greenpeace Canada, told Humber News that Canadians should be concerned about the sharp rise in the transport of crude by rail.

“Our infrastructure was not designed to carry this quantity of dangerous cargo, so we simply don’t have the safety system in place to deal with it.”

But a spokesperson for the Transportation Safety Board of Canada told Humber News millions of barrels of crude have been safely transported by rail.

Statistics on the TSB website, compiled from StatsCan, show that rail accidents decreased from nearly 1,500 across the country in 2005 to under 1,100 in 2012. That’s more than a 25 per cent decrease.

Stewart pointed to the Lac-Megantic accident in Quebec this past summer, in which 47 people died after a runaway train carrying crude oil exploded in the town. That accident, he said, renewed concerns many Canadians have of rail safety.

“We’re seeing more and more crude moving by rail. Derailments involving lumber or wheat don’t get a lot of attention, because there’s no real safety or environmental concern. But with crude, the consequences are so much greater.”

Kylie Manchester is a resident of White River, Ont., where a CP Rail derailment of crude oil spilled more than 400 barrels into a wooded and wetland area this summer. She told Humber News she is concerned about the ongoing environmental cleanup.

“If it gets into the water, ya, that’s really upsetting. If it’s out of sight, it’s out of mind, I guess. But this is within walking distance to my home.”