Toronto police given honours for service 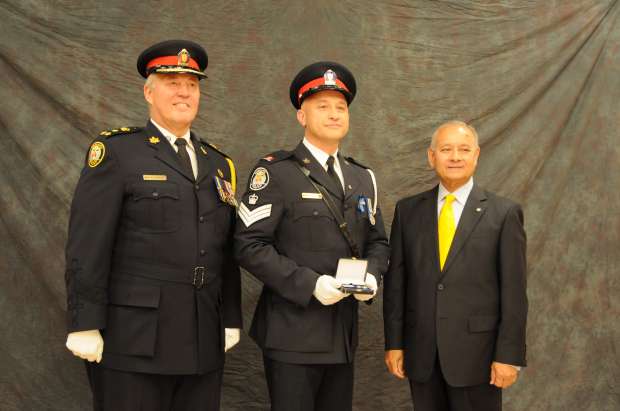 “We have an opportunity to thank people. They come up here and stand with us and they bring their families up and that’s always the best part,” he said.

The awards range from medals to pins all with different levels of recognition for civilians, police and auxiliary officers alike.

Blair told Humber News it was an honor for him to be able to present officers with the reward because he’s worked with them all these years.

“I’ve been a police officer for 37 years and I’ve worked all over the city, almost everybody that comes up I know those folks, they’re my folks,” Blair said. “I have a relationship with them and I’m proud of that relationship.”

Insp. Stu Eley told Humber News he’s amazed at all the dedication within the force.

“Those people have put in a lot of time and effort into the service to support us on the front line. People are obviously dedicated to being involved in these careers.”

Eley said that these award ceremonies only happen once a year and it’s a chance for the force to reunite.

“They’re kind of uplifting. When you go to the meetings and you see all the negative parts of your job, it’s very fulfilling to come to an event like this where you are able to recognize people for the good work they do,” Eley says.

Blair gives the families and friends of those awarded recognition by saying how important their support is.

“It’s a bit of an opportunity for me to say thank you, to the wives and husbands and parents. Because they’ve sacrificed as well. And we never get to see them except at an event like this. They are so proud of their family member who’s getting recognized it makes it a really positive experience for everybody,” Blair said. “After so many years of service to the city, that service means you miss a lot of family events. You’re not around to do some things. Everyday they go out to work, their families worry about them and make sure they come home safely. Today is just an opportunity to acknowledge the importance of that service and to say thanks.”

Both Blair and Eley say the annual ceremony is almost a type of reunion for the force.

“It’s a bit of a reunion for people because they’re of the same generation. Quite often these are the people they graduated Police College with,” Blair said. “They’re then scattered all across the city, and they come back for this ceremony, and for some of them its really one of the first times they’re in the same room. Today is a day to reunite.”