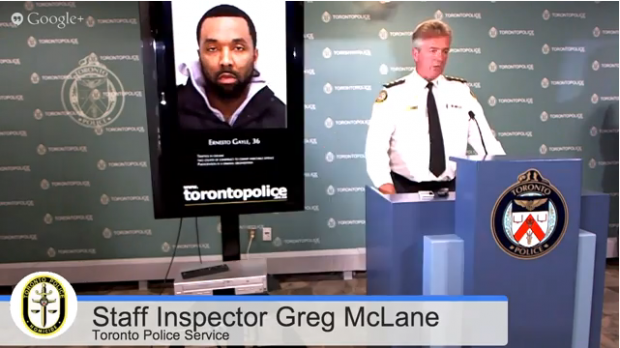 Toronto Police have executed two major sting operations within the past year and a half, investigators said Friday morning, leading to 41 arrests and 417 criminal charges.

Police said in a news conference the two operations, Project Brazen and Project Quell, targeted two major gangs that have been fighting over the drug trade in Scarborough.

“There are some people that we allege are some of the older members and some were newer, ” said Det. Jeff Allington.

“We just have to keep at them and keep taking this monster out by the knees,” he said.

The feud between two gangs, the Galloway Boys and Orton Park Boys, caused an increase in shootings during a four month period in 2011, said police.

“This was two separate gangs that were struggling for domination over a particular area to move forward with their drug trade,” said Staff Inspector Greg McLane of the Homicide Squad.

In addition to the 41 arrests, eight of which occurred yesterday, police said they have nine people in custody waiting to be formally charged.

Arrest warrants  have been issued  for an additional eight people who are sought by police.

The undercover operations can be traced back to the death of D’Mitre Barnaby, who was killed in Dec. 2011 during the sudden increase of gang shootings.

“Mr. Barnaby was at the wrong place at the wrong time,” said Allington.  “That is certainly what our evidence shows. I think it is important to say that these things happen. What we are dealing with are a lot of drug dealers and alleged gang members. As a result of that, there are innocent victims involved in all of these offenses.”

Information gathered during the investigation into Barnaby’s death is what led to the launch of Project Brazen on April 23, 2012, police said.

“The investigation also reveals that Mr. Barnaby was not affiliated with either one of these two gangs,” said McLane.

These recent arrests and major busts prove investigations are always ongoing and not forgotten, said police.

A lot of work is continually happening behind the scenes that the public may not see every day, said Allington.

“It is important to have the members of the community have faith and trust in the police,” said McLane.

“We are working diligently to try to root out the criminals and the drug dealers and the people who are responsible for violent crime.”