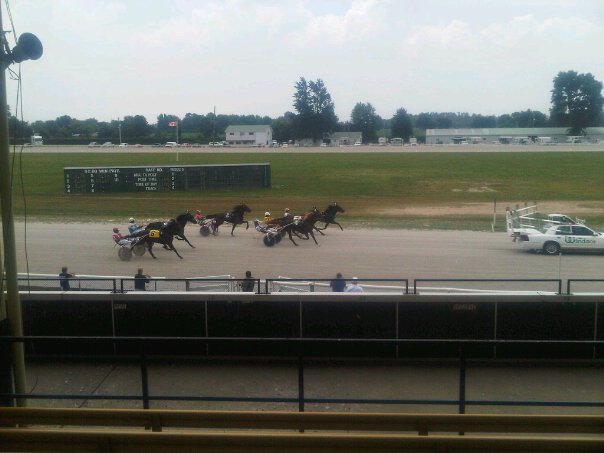 By Julia Grabowska and Mark McKelvie

Start of a race at Dresden Raceway who was not included in the $400 million plan.

The Ontario government has announced that the horse racing industry will receive new funds, a new sustainability plan, and new governance.

“Part of the plan is to invest $4 million over five years in the five-year horse racing partnership plan,” Wynne said.

“I recognize that if it is my responsibility to create jobs and grow the economy in every part of Ontario,” Wynne said. “We have to make sure we support hardworking people in every region of the province… and that includes horse racing.”

The announcement means the racetracks will be getting about half of what they received per year under the former Slots at Racetracks Program, which concluded in March 2012.

Wynne made it clear that the plan that was in place before did not have long term sustainability, and the new plan focuses on sustainability and accountability.

“We’re going to help support an industry that has the capacity to plan for the future, so we see this as an investment,” Wynne said.

One of the changes that will take place is the integration with Ontario Lottery and Gaming Corporation modernization plans.

Under the new agreement 90 per cent of the funds will go towards Woodbine/Mohawk, Flamboro, Georgian, Grand River, The Raceway at Western Fair, Clinton and Ajax Downs. The other 10 per cent will be for smaller regional tracks to offer grassroots racing.

Map of Racetracks who raced in Ontario during 2013: (Green indicates part of agreement, Red not included in agreement.)

At time of writing there was no reaction from the GTAs Woodbine Racetrack on Highway 27 at Rexdale Boulevard.

However, according to Gord Dougan, General Manager of Hanover Raceway, racing will be cut back at the tracks at Hanover and Clinton. The tracks will be sharing just 30 days of grassroots racing per year.

Dougan said that he hopes Hanover can apply for some of the extra money set aside in the ten per cent to offer more racing for local horsemen.

“Now we will try to keep pushing and see if we can get some more race dates for the hundreds of people that live and raise their horses in our area so they don’t have to drive so far to race. That will be my next work,” Dougan said.

Horsemen in the areas where racing will be cut back, particularly in Windsor and the Ottawa area,  are complaining they’ll have to travel further in order race.

In order to set the basis for growing into the future, John Wilkinson, member of the industry transition panel, stated that, “the new arrangement has to be transparent, has to be accountable, it has to provide a positive way to return to the taxpayers, and has to be driven by the marketplace.”

Another transformation in this plan means the Ontario Racing Commission will play a reduced role in the racing industry.  The Commission’s former broad responsibilities will be reduce to solely regulation.

“My understanding of the plan is that our capacity to have all of the tracks develop business plans and have a sustainable future is absolutely what we want to see,” Wynne said. “Communities will see significant economic benefits and the breeding and training industry that it supports.”