Comedians set to bust up Ottawa this weekend 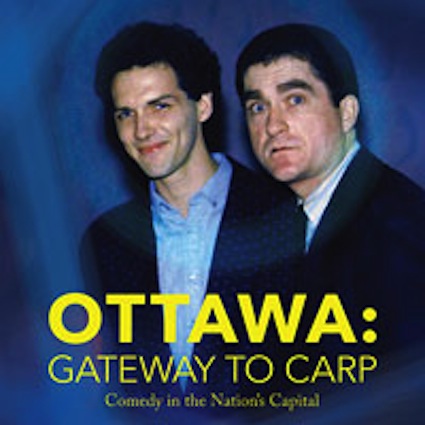 Ottawa usually isn’t the first Canadian city that comes to mind when “comedy festival” is mentioned, but from October 3rd to the 6th, it plays host to the biggest bunch of jokers outside of Parliament.

The 14th Annual Canadian Comedy Awards Festival takes place in the nation’s capital for the first time, with Canadian comedy nominees in more than 20 categories.

The festival features several graduates of Humber College’s School of Comedy, including the host of the award ceremony Ryan Belleville and performer Nikki Payne.

Humber comedy graduate and Metro News writer, John Mazerolle, said Ottawa has a rich history of comedy that many people may not be aware of and he’s written an e-book to spread the word.

“Toronto has a thriving stand-up scene and Ottawa doesn’t really compare in size, but in terms of the comparison between what Ottawa churns out for a city its size, it hits way above its weight [in pop culture],” said Mazerolle.

Ottawa: Gateway to Carp is composed exclusively of firsthand accounts and anecdotes from more than 26 major players in comedy, including Norm Macdonald, Tom Green, and Rick Currie (writer for the Rick Mercer Report).

“It was fun – they were great people to talk to. You always wonder, talking to comedians, ‘were they weird or wacky?’ No, they’re professionals,” Mazerolle said. “Just to talk to Mike Macdonald was a treat.”

“Ottawa is a place that has produced a ton of very uniquely funny people. They tend to be a bit smart and sharp when it comes to the kind of humour that they do, and the Canadian Comedy Awards [Festival] is taking place in Ottawa this weekend. So we decided that we would, as part of our sponsorship, do an e-book,” Clark told Humber News before jetting off to Ottawa himself.

Mazerolle’s favourite account from the book includes Norm Macdonald’s “worst gig ever” at Chateau Laurier with Jeremy Hotz, where Macdonald ended up locked in a bathroom with the lights out. However, Gateway is more than just a compilation of funny stories. It provides a look into the comedic realm in a city that may have not been widely regarded for the comedy scene before.

“Don Ferguson of [Royal Canadian] Air Farce said that ‘Ottawa is a small town with big city people in it.’ The small town aspect of it gives the comedians something to rebel against,” said Mazerolle.

According to Clark, a majority of comedians originally come from Ottawa. It’s about time Canada’s capital is finally being showcased for the hilarity it churns out, he said.

“I’ve seen comedians who, at first glance seem really silly, but when you sit and watch the full set, you think ‘wow, this is so clever, it’s so meta’, whether it’s Jon Dore, Tom Green or Norm Macdonald,” said Mazerolle.

Originally supposed to be 6,000 words long, the book has turned into a 90-page fun and comprehensive look into what makes Ottawa’s comedy scene unique.

“It was a rush – it was very intense putting together a book so quickly,” said Mazerolle.