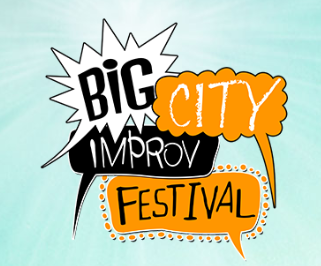 The Big City Improv Festival is bigger than its youthful two years may suggest.

The nine-day festival, which kicks off Friday in Toronto, will showcase 91 improv acts across four venues.

“We just wanted to organize the city,” Bob Banks, a member of the festival’s organizing committee and the improv troupe Mantown told Humber News.

“The festivals in the city were a little disarrayed. At some points there were four because everybody was trying to build a foundation to grow from.  This year there is one — us.”

Adrianne Gagnon, the executive producer of the festival, said improvisers rallied around Big City and used it as a way to support each other and see what work is being done.

As a result, Big City has a strong community feel to it compared to other festivals in New York or Chicago.

“The Chicago and New York festivals are very big,” Gagnon said. “It’s a little smaller. We did expand this year to include the John Candy Box and the Baltic Avenue (Theatre) for a couple of shows. The main focus is at Comedy Bar, so it has a neighbourhood feel to it.”

“(Mantown) is more about the atmosphere than the actual comedy itself,” Banks said. “The show is high-energy, fast paced comedy. It’s the kind of thing that on a Friday night at 11:00, you don’t feel weird about drinking and watching.”

Gagnon says their additions to the festival show Big City modeling itself after American festivals, which tend to have larger star power.

The festival will also hold improv workshops as well as a Back to the Future themed dance.

“People when they are watching improv they want to be able to do it,” said Erin Conway, a member of the organizing committee and general manager of the Second City training centre. “Why not pair up the shows with them being able to get up on their feet and actually try to do it?”

“One of the great things about the Big City is last year we had 13 out of town guest teams, this year we have 30,” Banks said. “As those teams come into our city and see our talent, they go home and tell people about that.”

Banks said  improv isn’t as respected a form of comedy in Canada, as it is in the United States,

It has been taken more seriously over the last six years, as NBC and Saturday Night Live have both come up to Toronto to scout for comedic talent, Banks said.