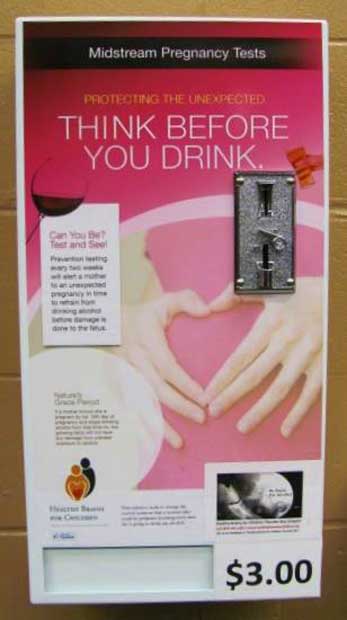 Wash your hands, dry them off, and buy a pregnancy test.

Lakehead University in Thunder Bay, Ont., is making these options available to female students, with a new initiative by a group trying to raise awareness for fetal alcohol syndrome.

Marilyn Leiterman, Chairperson for Canada’s first chapter of Healthy Brains for Children which is located in Thunder Bay, said the number one goal is preventing fetal alcohol syndrome. In order to do so, her group has helped Lakehead install pregnancy test dispensers in the women’s washrooms at the campus pub.

Their intentions for the dispenser is to educate a new generation of future parents.

“We talked about who this would have the biggest impact on, and decided to start with students,” Leiterman told Humber News. “They have good minds, and are ready to learn.”

Leiterman said it’s troubling how many people are unaware of fetal alcohol syndrome, but said it’s easy to prevent once women know what it is. The disorder can affect a fetus causing irreversible damage to an infants’s brain.

David Yen, a coordinator for the Department of Public Safety at Humber’s campus pub LinX Lounge, said it’s unlikely Humber will buy into the cause and add pregnancy test dispensers in their washrooms.

“There are so many questions we would have to ask before even considering it,” Yen said. “The health centre would definitively need to get involved.”

Best way to go about it

Yen said the organizations positive intentions are apparent, but said he thinks this isn’t the best way to go about promoting it.

“A bar seems like an inappropriate place for the dispenser,” Yen told Humber News. “It’s not very private, and I just don’t think it would really get any use.”

Leiterman said even if the dispensers aren’t being used frequently, they are still an effective way to spread awareness.

“Our hope is that by having them in washrooms women will be curious about the cause, and will want to learn more,” Leiterman said.

Yen said by the time students arrive at the bar most have already consumed alcohol, at which point a test would be ineffective.

Hopes women will reconsider drinking if they are pregnant

Leiterman said her group hopes once women are aware of the dispensers they’ll reconsider drinking alcohol before they’re certain they’re not pregnant.

“Our tests are only $3 and easily accessible. It’s more convenient than paying $10-$20 at a drugstore,” Leiterman said.

Lakehead University is the only school in Canada so far with a dispenser in their pub washroom, but Leiterman said Healthy Brains for Children is looking to change that.

“We want to eventually spread the cause across Ontario and all of Canada,” Leiterman said.