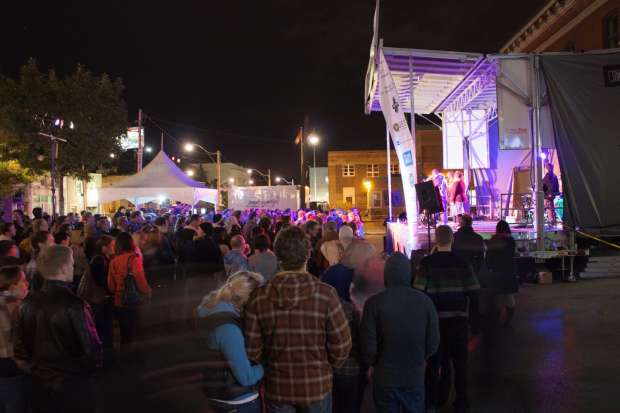 The mainstage of the 2012 Junction Music Fest. COURTESY: Junction BIA

Fifty-three musicians are bringing their acts to 29 stages across the neighbourhood on Saturday for the  Junction Music Festival.

“About 70 per cent live in the neighbourhood,” said Skindelyte, “the Junction has become one of the primary residences for musicians in Toronto. We have a lot of talented people living here.”

The one-day festival, now in its second year, has 23 indoor venues, six outdoor stages and location-specific special events and workshops. The festival is grounded in the usual mixture of neighbourhood bars and restaurants, but there are also some off-beat venues like The Hair Lounge, a full service salon, and West Toronto Paint and Wallpaper.

Skindelyte said the decision to include atypical venues came from the successes they had being part of the Scotiabank CONTACT Photography Festival.

“It’s a scenario where we pair up unconventional venues with artists. Sometimes they need to see that business in another light,” she said.

Despite being in its second year, there is strong interest in participating in the festival by musicians and venue owners, Skindelyte said.

“The business owners are so happy to participate in an event. A lot of them invest a lot of time and effort.”

Working hard for the community

One of those owners is Roger Bu, owner of Axis Gallery and Grill. Axis is the sponsor of the McMurray Avenue Stage and will have three performances. Bu said anytime the restaurant can help and be part of a community event, they do.

The McMurray stage is the only outdoor venue not set up by the Junction BIA.  Owners are responsible for their own setup and bookings, but the BIA provides support by sharing act submissions, Skindelyte said.

Bu said the setup work and money needed to be part of the festival doesn’t necessarily mean Axis will make a profit. He said the neighbourhood should be thought of first.

“For this one day event, it’s not going to financially benefit the restaurant. But you have to have something going on for this community, for this neighbourhood. In the long-term it will pay back.”

The festival begins at noon and goes until midnight Saturday.