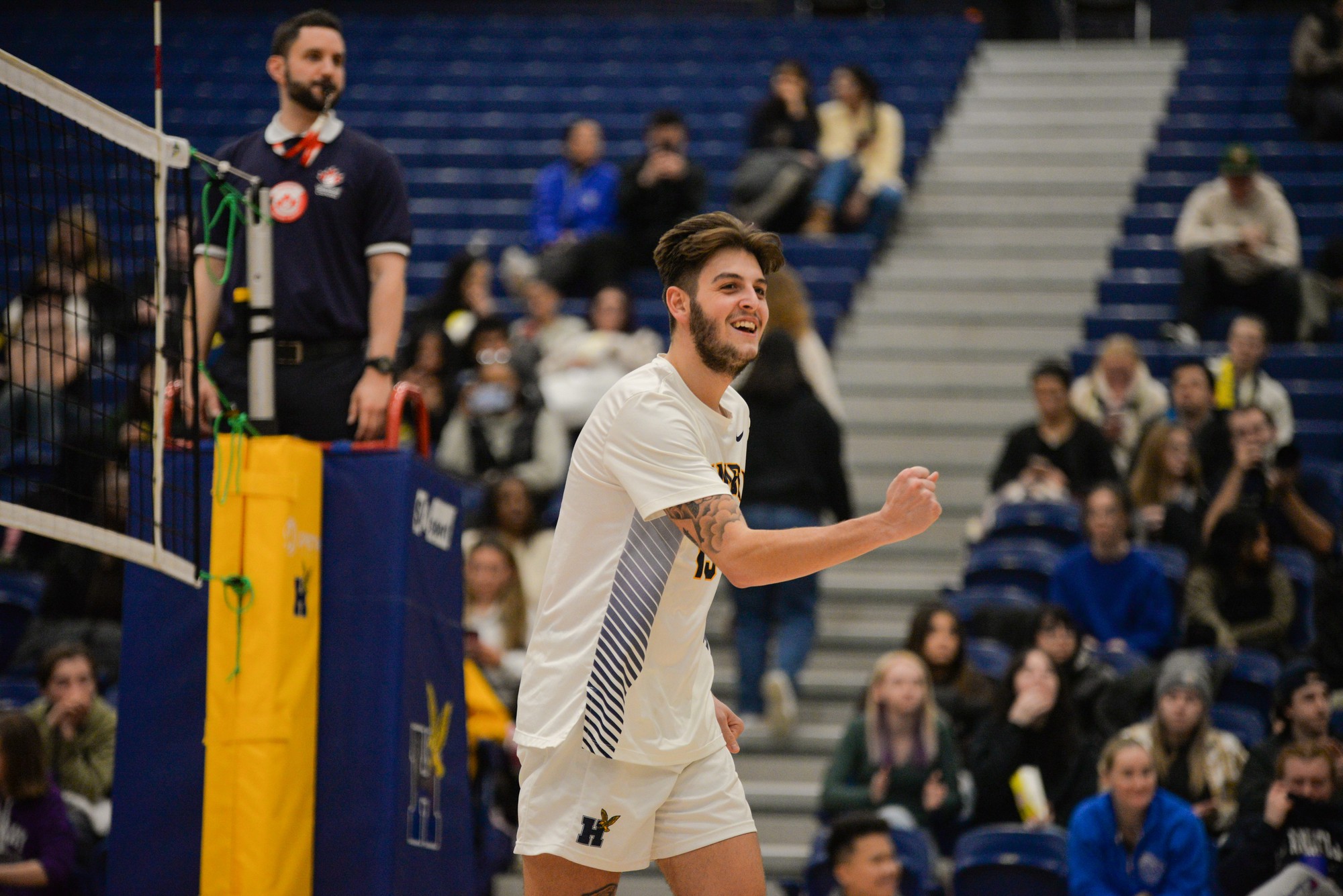 Humber Hawks men’s volleyball team captain Jake Gomes dove into the floor to dig the ball that was within his reach. The setter swiftly stood up and prepared to run the next offense.

There are only a few games left in his college athlete career, the final year student in Management Studies said after the match. 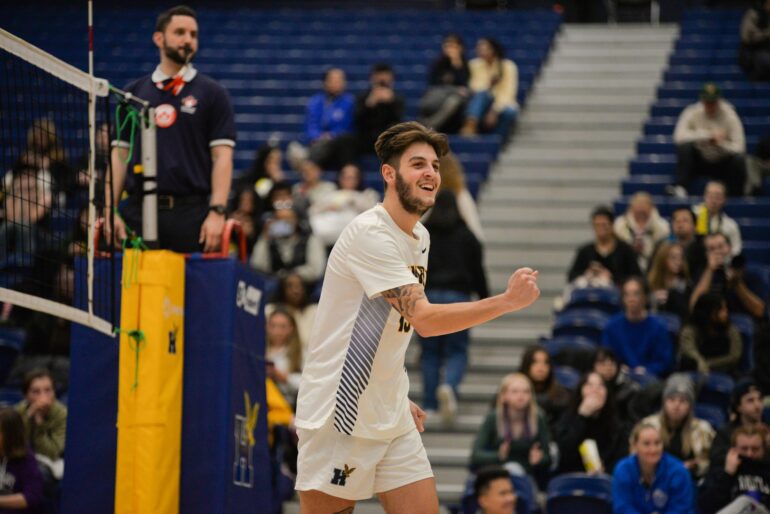 Hawks captain Jake Gomes celebrates after his team scored in a matchup against the Fanshawe Falcons in the 2022-23 OCAA Men’s Volleyball on Jan. 19. Photo credit: Krystal Yeung

Gomes led the Humber Hawks men’s volleyball team, eighth in OCAA rankings with a 3-2 to win the game in five sets against the number 1 ranked Fanshawe Falcons.

Gomes, who took Athlete of the Week honours last Nov, 28, contributed with 39 assists.

Humber volleyball coach Wayne Wilkins said it wasn’t their best outing of the season yet, but they improved when compared to their last matchup against the Falcons.

“The reality is I think we have the capability to win at the national stage,” Wilkins said.

He said Gomes brought a “Michael Jordan effect” to the team as he made people around him better. 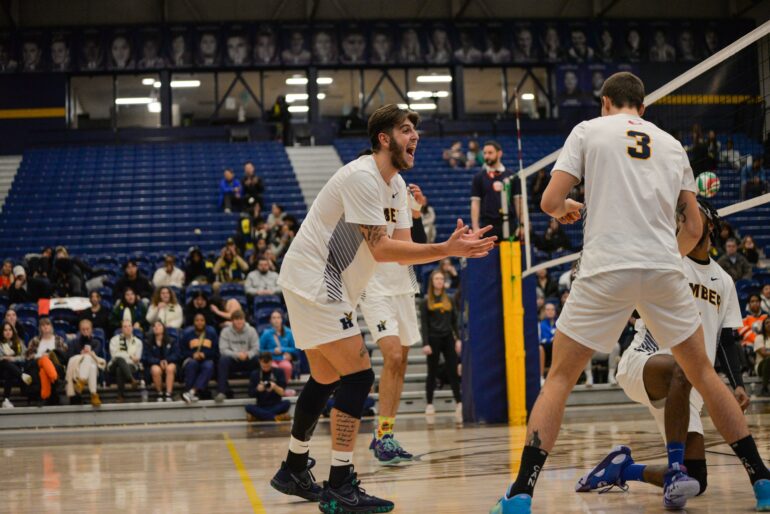 Jake Gomes (left) cheered as No. 3 Maximum Crowder completed a successful attack in the match against Fanshawe on Jan. 19. Photo credit: Krystal Yeung

“Jake’s good and Jake’s good,” Wilkins said. “But he helps make the middle better, he holds his passes accountable.”

Gomes’s journey to the setter position for the Humber Hawks was a deliberately chosen path that began in elementary school. There was much blood, sweat and tears along the way.

He said he first tried volleyball at Grade 5, when he “wasn’t tall,” wasn’t a good hitter, and “wasn’t a great jumper.”

But he realized that he had good hands, which enabled him to distribute the ball around him, Gomes said.

Together with his leadership skills, he started his career as a setter, which involves designing the play. The setter is much like a football quarterback as the offensive driver who sets the ball in the right spot for attacking players.

“I read the play before it even starts,” Gomes said. “You kind of read the defenders.”

He could determine which offensive strategies he wanted to run before the game, he said. But Gomes said there could be numerous variations at any point, such as factoring in which players are on the court, the other team, and every rotation at any point, he said.

Setters send the ball to hitters at any position, hopefully at a perfect trajectory, but it’s also important to understand “some players jump higher, some players are faster, some players swing more across instead of align,” he said.

He made sure he had the same set of specific players every single time, Gomes said.

He said he acquired different strategies through watching videos of himself and replays and evaluated what he could have done better, he said. 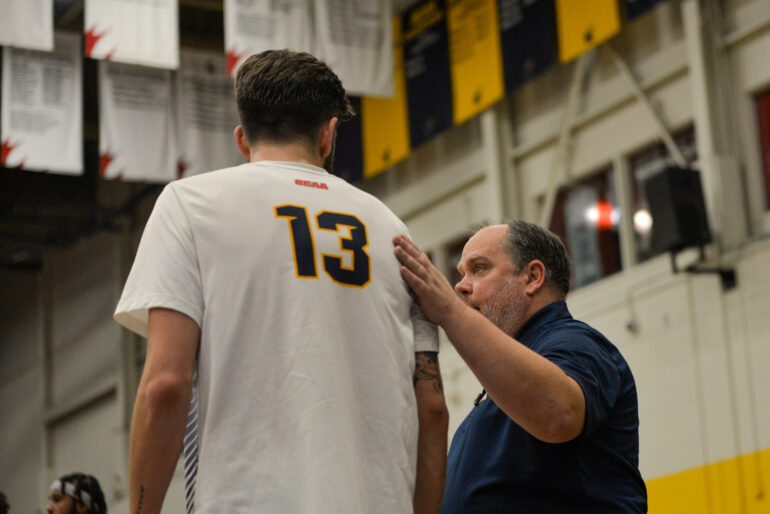 His coaches helped him greatly in developing strategies, Gomes said.

“Especially my strategies, (which) definitely got better after coming to Humber, playing at this high level,” he said. “I would say definitely from the coaches.”

A setter could be stressful at times and coach Wilkins helped him, he said.

“He will give me signs, just so I can take my mind off and he will help me out,” Gomes said.

His coach said the position is a difficult one. Wilkins said the dedication seen in preparational work was something the rookies could learn from him.

“Jake goes out with 100 per cent effort every single day,” Wilkins said.

He said he wasn’t surprised when Gomes broke the service aces record. 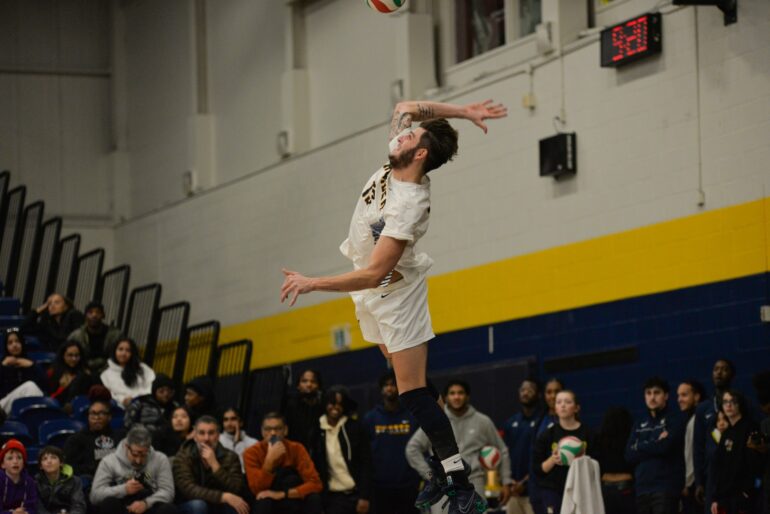 Gomes said he came to Humber as a float server and started spin serving in the summer after the first year. After four years, he now holds the highest service aces per set in Humber.

Gomes said he is still improving and changing his form. 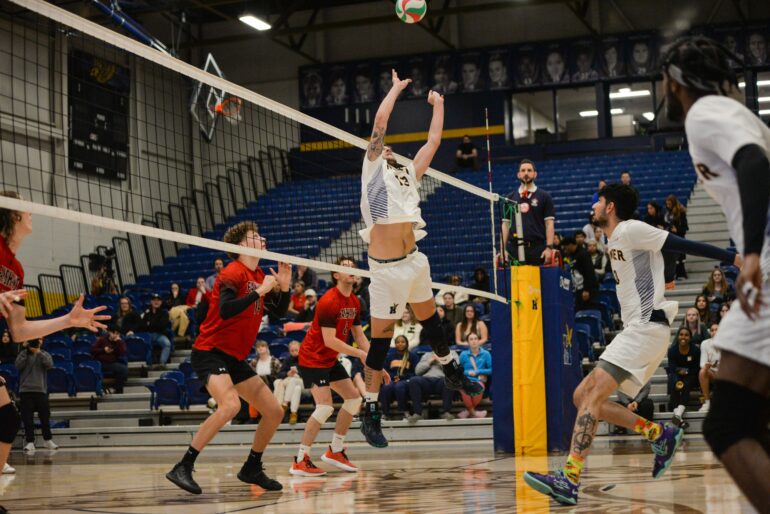 His teammate, middle blocker Jaskarn Kalsi, said it was Gomes who made him look good in volleyball.

“Honestly I don’t even know where I’m swinging,” he said. “I just pull my arm up and he just placed the ball perfectly in my hand.”

Kalsi said Gomes was a captain who made people around him better. And Gomes made them the best players they could be as a setter, he said.

Gomes said he made sacrifices in being a student athlete. There were concerts and sporting competitions he missed because he had practice, he said.

Gomes wanted to go to the Rolling Loud hip hop concert with his teammates, but they scrapped their plan when they knew there was a schedule conflict, he said.

But he convinced himself that it was only for five years where he had to give all he had to the game.

“I love playing volleyball, I love the sport, do I wouldn’t want to be anywhere but here,” Gomes said.

He said one reason he played volleyball was his brothers, as the Athletics Department is a family to him. 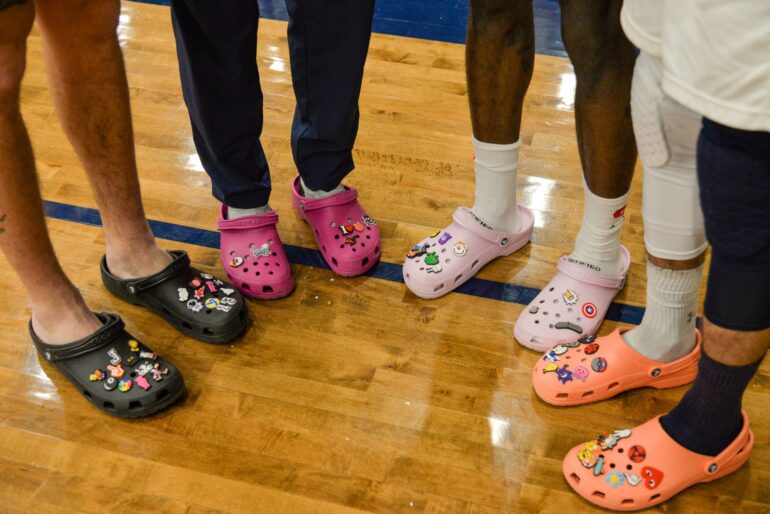 Gomes said team traditions include wearing crocs, “a game day thing” for him and his teammates.

Outside hitter Teyven Blackmore said it was a teambuilding activity for them.

Blackmore said they would buy and share charms with one another every two weeks. They got several pairs because they ran out of holes for new charms, he said.

“It’s great to be a part of,” Gomes said. “It’s a huge part of my college experience.”

He said it was sad he was approaching the finale of his student athlete life.

“I’m definitely proud of the career I have had,” he said, but he acknowledges the end of his student athlete life marks a brand-new start. 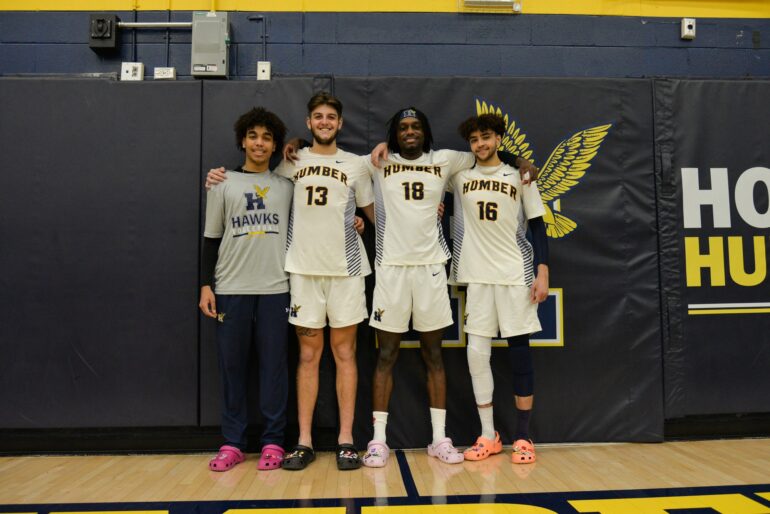 Gomes said he would like to continue his volleyball career.

“If I do get the opportunity to go play overseas in Europe, I would definitely take that opportunity,” he said.

Nothing was confirmed, but Humber and his coaches were helping him along the way, Gomes said.

He also said he had faith in the future Humber Hawks men’s volleyball team.

“A lot of guys from the starting line-up, a lot of recruits this year,” he said. “The setter behind me, he’s improving a lot throughout this year.”

Gomes said he could see the Humber Hawks being a strong team in the coming years.

“Fight for what we want more than anyone else,” he said. “Want it, chase it, go for it.”