Ride for a Cause returns after two-year hiatus 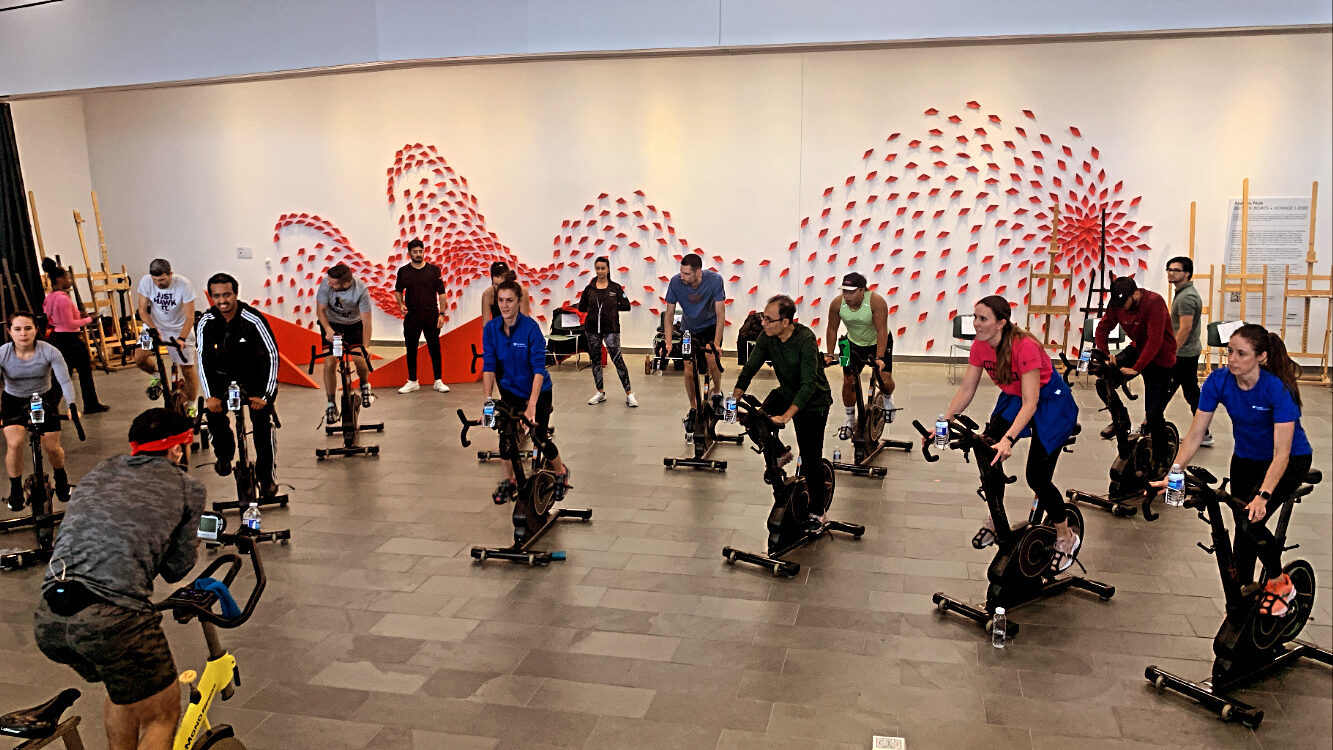 The Ride for a Cause, or Spin-a-thon, had been on hiatus for the past two years because of the COVID-19 pandemic. The event took place at the Humber North campus, in the Learning Resource Commons, from 3 p.m. to 6 p.m.

Student teams posted an entry fee of $125 per team, while faculty’s entry fees were at $250. The event was put on by fitness and health promotion students and all proceeds went towards The Daily Food Bank, a Toronto-based non-profit dedicated towards ending hunger in urban communities.

Participants were on stationary exercise bikes, led by several instructors, some of whom were Humber professors.

Mikaelle Heyens, a third-semester fitness and health promotion student, said it was time to bring back the fun and engaging event.

“We decided to bring the fun back because it’s a perfect time,” she said. “It promotes well-being, mental health, all that type of stuff and it’s a whole lot of fun.”

“We decided to donate to the Daily Bread [Food Bank], because the pandemic has affected a lot of people in our community and knowing that we can come together and help put food on people’s tables is what we want to do, especially with inflation and food shortages.” Heyens said.

In its 2021 report, the Daily Bread Food Bank said there were 1.45 million visits to a Toronto food bank, a 47 per cent increase in demand for help.

The report also stated that 36 per cent of food bank clients said they visited the food bank because their income was too low and 20 per cent because they lost their job, while 10 per cent said they were unable to find work and were ineligible for benefits.

Almost one in nine respondents, or 85 per cent, said they sometimes didn’t have enough to eat, the report said.

With the shift to online learning over the past two years, organizers such as Ghazal Nayar, a member of the marketing team for the event, expressed concern that it may have had an impact on turnout.

“It’s been particularly hard because people nowadays don’t want to come in public [as] much,” Nayar said. “But people are still here. I mean, it just changed a lot, for sure, but it’s still fun.”

There were various prizes handed out at the event, including the grand prize of a bicycle. The bike was recycled and secured by the events sponsorship team.

Several other sponsors were focused on healthcare, including the VIP Healthcare Clinic and Anytime Fitness, alongside Humber departments such as Humber Massage Therapy and Humber Athletics.

Philemon Weldu, a third-year University of Guelph-Humber student, said they thought it would be great to see an event like this get put on at Humber.

“It’s so important to give back to the surrounding community, and it’s great we get to do that as students as well,” Weldu said.

The event only managed to raise 77 per cent of the $5,000 goal, but Heyens hopes students were left inspired to help their communities.