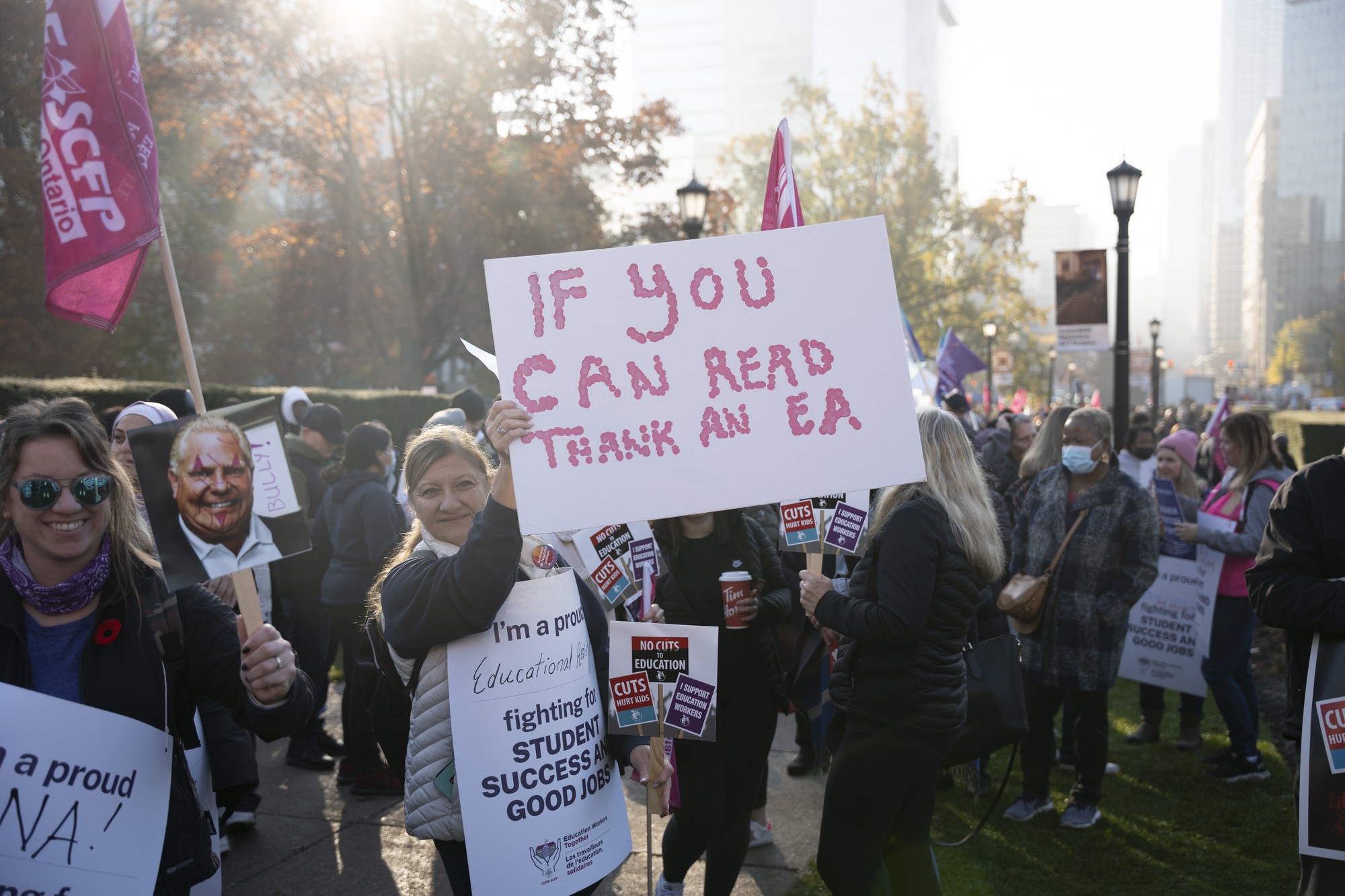 Thousands of union members gathered in front of the Ontario legislature on Friday morning after a new bill made it illegal for the Canadian Union of Public Employees (CUPE) to strike.

CUPE President Fred Hahn took to the stage as the sun beamed over the building behind him and ramped up the energy of the crowd.

A sea of education workers holding signs and flags huddled around him.

“They wanted us to feel afraid, but today we’re showing them we have no fear,” Hahn said as protesters cheered in solidarity outside Queen’s Park. The picketing education workers average about $40,000 a year.

“The salaries that they want to offer us is a joke,” an educational assistant said as she was decorated with signs supporting the cause.

“Our work is not recognized according to what they want to pay us,” she said.

Protesters, including the education assistant who spoke to Humber’s Et Cetera, were advised not to give their names in interviews because of fines that would be imposed from Bill 28 – an unprecedented piece of legislation put through by the Ontario government on Thursday afternoon that revoked the union’s right to strike. 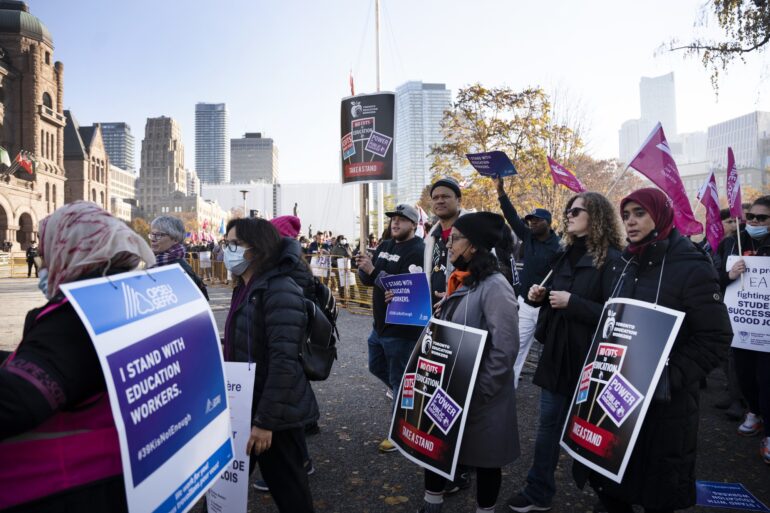 The provincial government invoked the notwithstanding clause of the Charter, which allows governments to pass legislation even if it is unconstitutional.

“To include this notwithstanding clause, that’s just setting off a nuclear bomb in the middle of negotiations and then wondering why you can’t come to an agreement,” NDP MPP Chandra Pasma said.

“To do it before workers have even gone on strike while workers are still at the table is already not acting in good faith,” she said.

They had been in negotiations with the Ontario government fighting for an annual salary increase of 11.7 per cent, which is about $4,600 more per year from their average salary.

The increase would also reverse the cuts that have taken off their wages over the last 10 years.

In an October press release, CUPE said there has been a total of $1.6 billion in cuts from public education in the last year alone.

“There’s got to be a change because there’s nothing but cuts happening,” the educational assistant said.

“We need to be recognized. With everything going on, we’ve got our own families at home and it’s hard to survive on our pay,” she said.

On Sunday, CUPE rejected the final offer from Ford’s government that included a 2.5 per cent annual increase in salaries for those earning under $43,000 and 1.5 per cent for all others.

“We feel strongly that we must do everything available to the government to give a voice to children,” Minister of Education Stephen Lecce said in a press conference.

The Ontario government said that its priority is to keep children in school. They highlighted the impact that the pandemic took on the kids’ education over the past two years.

Pasma said that rather than the government being focused on passing Bill 28, they should have instead been at the negotiating table.

“Refusing to come to the table guarantees there will be a strike,” she said.

“Our government has said that it promises kids a stable normal school year, and instead they’ve essentially guaranteed that our kids’ school year is going to be disrupted,” Pasma said.

Prime Minister Justin Trudeau criticized the province’s use of Bill 28, saying that it’s a “loophole that a majority uses to override fundamental rights of minorities.”

Another education assistant walking in the picket line around the Ontario Legislative Building said they are willing to picket for “as long as it takes,” to find an agreement between workers and the government.

Schools were forced to close today because of the walkout and many are preparing for remote-learning in the event the strikes continue next week.