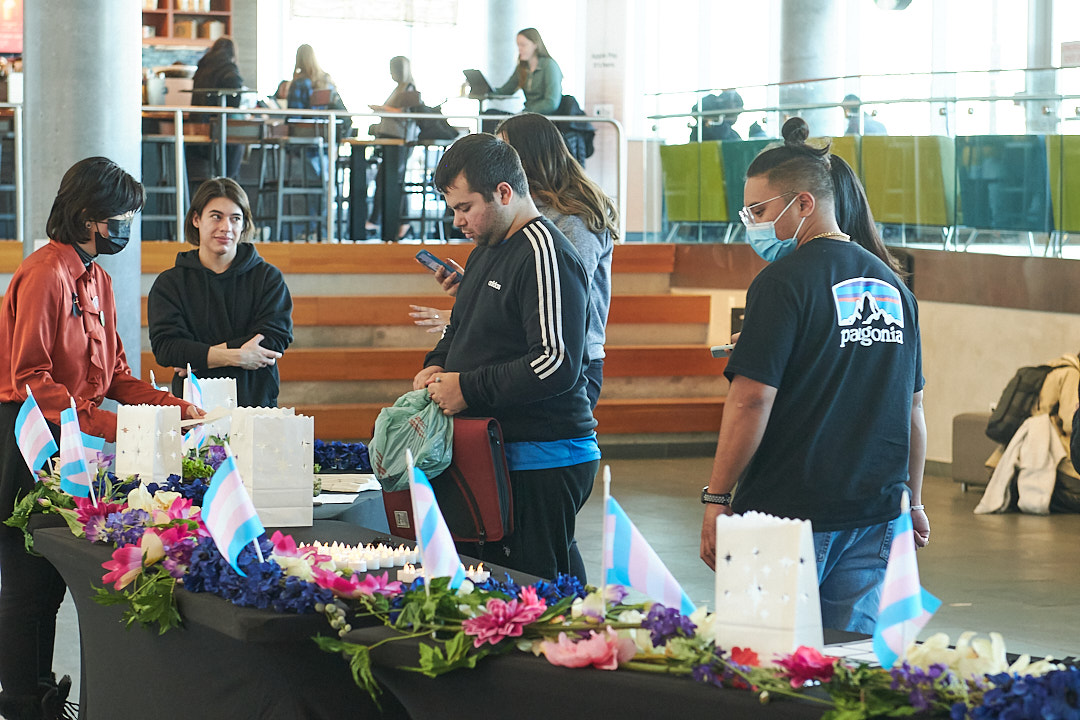 Transgender Day of Remembrance was observed on Nov. 20. The day was established in 1999 to remember and honour Rita Hester, a trans woman who was killed in her Boston apartment.

Humber College held three events on campus to mourn the lives of those lost to transphobia and anti-trans hate crimes.

Her presentation’s final words were a call to action which reflects how she was feeling during transitioning.

“If we come to acknowledge, love and respect our uniqueness, then, just maybe, we can learn to respect the uniqueness of others,” she said.

A memorial was held in the Learning Resource Centre hosted by the LGBTQ+ Resource Centre, which was also the first-year experience for a public memorial remembering trans lives that were lost in 2022.

White bags containing a number of items, including white tea lights, displayed the names of those lost, and information flyers about the history of the day. The event was punctuated with a moment of silence at the beginning and end of the event.

Philemon Weldu (He/Him), a third-year media and communications student, said that this day is important to honour and respect the lives that were lost due to transphobia and anti-trans violence.

“There is so much pain that is in the LGBTQ+ community, especially surrounding events that have hurt trans and fellow members of the LGBTQ+ community,” Weldu said. “So today is an important day to reflect and make sure that we make action to help support trans people in the future.”

Izzy Dewi, who identifies as he/they and is a User Interface Design student who is part of the LGBTQ+ community, said Transgender Day of Remembrance is a solemn but important day.

“As someone who identifies as trans masculine, which is under the trans community as we commemorate the lives that were lost in our community, it’s sad and painful yet it is important and part of me is scared that it might be me,” Dewi said.

On the eve of this year’s Transgender Day of Remembrance, a shooting claimed the lives of five people and left some 17 injured at Club Q, an LGBTQ+ nightclub in Colorado Springs, Colorado. The accused has since been charged with five counts of first-degree murder and five counts of bias-motivated crime.

The LGBTQ+ Resource Centre has offices at both Lakeshore and North Campus.

“The core function is to provide inclusivity and diversity for everyone on campus,” Dewi said.

“Since all of our staff members are members of the LGBTQIA community, the students don’t feel alienated by it and they feel like they are having conversations with people from our own community,” they said.