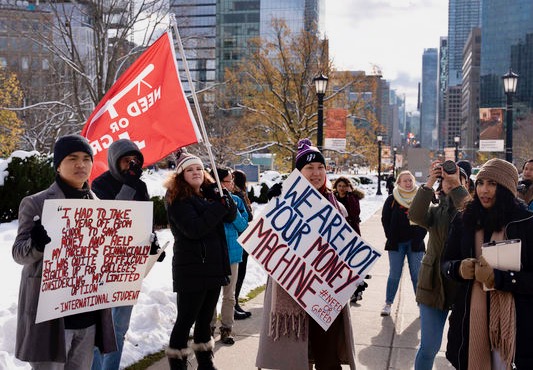 Hundreds of students gathered in front of the Queen’s Park on Wednesday afternoon demanding change to the rising tuition fees for international students.

“They’re doing the same program as domestic students and I feel like it should be equal between everybody,” she said.

The Ontario government has given tuition cuts and freezes to its students to provide them with financial relief and affordable education since 2019.

However, it does not include international students who have faced a constant rise in tuition fees that currently average more than four times that of domestic students.

The Need or Greed campaign, organized by the Coalition (a collective of student associations across Ontario) which represents over 120,000 students, looks to raise awareness about the lack of support being given to international students.

“We want to be on the government’s radar,” said Kristine Galvan, a manager of leadership and advocacy at IGNITE and the steering committee of the Coalition.

“We also want domestic students to know that there is a gap here,” she said.

Domestic student tuition fees have remained frozen since 2020 and are limited to increases of up to three per cent per year.

Ontario Colleges can raise international tuition fees by up to 20 per cent per year which can add up to $2,800 in extra costs on top of the already expensive fees.

Mridul Thomas, an international student from Humber College who came from India to get a better education in Canada, said that paying tuition is a big task.

He currently works a full-time job to be able to afford rent and cover tuition costs.

“The difference is too much because it’s four to five times more than what domestic students are paying here,” he said. “Hopefully we can get down some of the amounts so it’s affordable for us too.”

Lynn Courville, the president of Cambrian Student Council and one of the representatives of the Coalition, told Humber News that the gap in tuition fees between domestic and international students is “not really fair.”

Courville believes this because International students pay on average at least $14,000 per year while domestic tuition fees are around $5,000 annually.

“If the government wants them to be our citizens then they should take care of them and make sure that they have the capability of staying here,” she said. “If they want to stay here, they shouldn’t feel abused during this process.”

The coalition sent letters to Jill Dunlop, the minister of colleges and universities, and Linda Franklin, president and CEO of Colleges Ontario, requesting support to create a more affordable education for international students.

“We have not had anyone agree to speak with us yet but we are hoping to (be able to) after the protest,” Galvan said.

The Coalition said one of its main goals was to force the government to freeze tuition costs for international students.

“That’s one step closer to getting their fees reduced,” Carrera said.

“They come here to a different country to have a better life, but to have all those fees and work extra hard just to get an education isn’t fair,” she said.