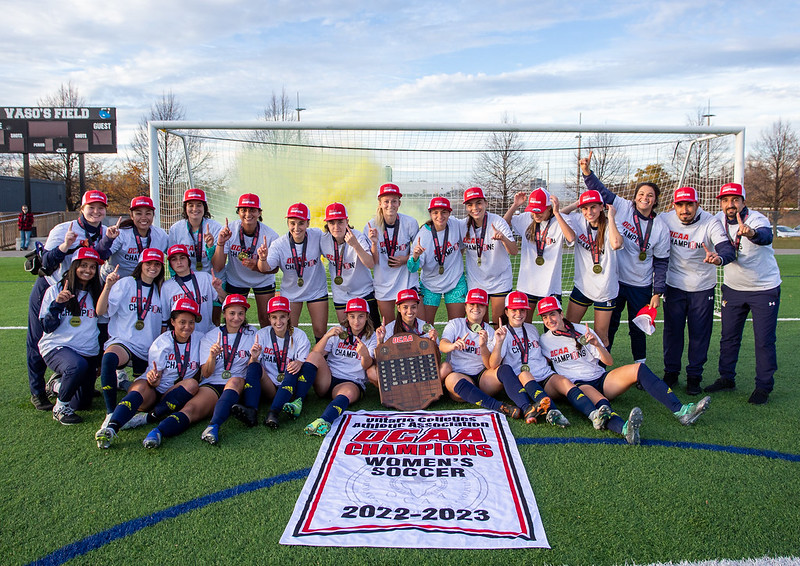 Humber soccer is the college’s most dominant and successful sport at the moment, as the men’s team flawlessly won all 10 games during the season, while the women aced all four of their playoff games.

If both teams proved anything during their championship victories, it was that they both had Seneca Sting’s number.

In the 23rd minute, the OCAA Defensive Player of the Year, Alex Meczarski scored the first goal of the game to give the Hawks the lead.

Four minutes later the Hawks scored the second goal of the game off the head of Abdul-Azeez Babawale.

The second half concluded with a convincing win worthy of gold, as Babawale scored two more to make it a heroic hat-trick in the 4-0 victory over the Sting.

The men’s win crowned them OCAA champions in Ontario for the 10th time in 12 years.

Defender Alex Meczarski said he’s ready for the nationals in Langley, B.C., beginning Nov. 9 and believes his team is a cohesive unit both on and off the field.

“I would describe us as a united, well-oiled machine, we are all like a family and we get along really well and fight for each other on the pitch,” Meczarski said.

Michael Aquino, the head coach of the men’s soccer team, said he’s honoured to be part of the Humber system and said it’s a privilege to be able to work with the athletes.

“It’s amazing, it’s a great institution and a good program, and the athletics department is fantastic. The group of guys to work with each year is high quality, so I am very honoured to be working with a fantastic program all around,” he said.

The women’s team also faced off against the Seneca Sting, which is the second-ranked team in the country. The Sting topped the OCAA postings in the regular season with a record of 10-0-0.

The Hawks won gold and captured their eighth OCAA championship in program history since 2012, beating the Seneca Sting 2-0.

The Sting took control at the start of the game, but Hawks goalkeeper Isabella Bernardi made two saves in the first seven minutes of the game. But by the 11th minute, the Hawks regained control of the game as Chantel Spalla scored the first goal with a header.

Hawks star player Kaitlynn Russell scored in the 54th minute following a period of pressure by the Sting to give the Hawks a 2-0 advantage.

Once the final whistle blew, the Hawks officially became provincial champions for the eighth time in program history.

Kaitlynn Russell, captain of the women’s soccer team and Athlete of the Week, said she was excited after winning the the OCAA title, but didn’t hide her nerves before facing the Sting.

“They were always our rivals, but throughout the whole game for anyone who was watching you could tell that our team was super hungry and definitely more hungry to win than Seneca was, which was a great feeling,” Russell said.

Jose Caro, first-year head coach of the women’s soccer team, said he’s proud of the team’s accomplishments, a testament to the players’ determination to win.

“Without hard work, effort, and intensity, our team wouldn’t be where they are today, so congrats to them for the enormous amount of work they were put through but I’m really happy to be a part of this amazing team,” Caro said.

At the nationals, the men’s team hopes to defend its national title while the women hope to achieve the grand prize for the first time in its history.