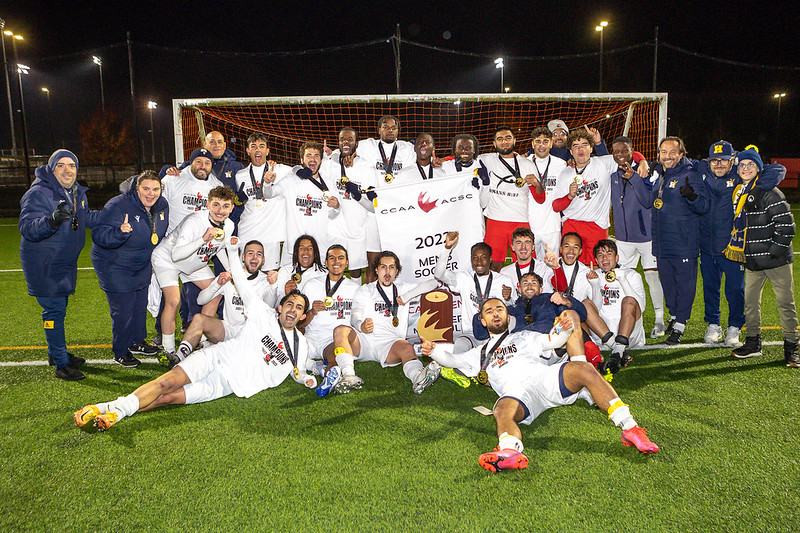 With this win, the Hawks now have nine titles in program history. This season, the team finished with a flawless 16-0-0 record.

Hawks captain and CCAA Player of the Year Luca Uccello, told Humber’s Et Cetera that the accomplishment was not a fluke.

“We went on the field and we gave all we had, and the results showed the hard work we put in,” Uccello said.

Head coach Michael Aquino said he’s very happy with the resiliency this team has shown throughout the nationals.

Brian Lepp, head of the athletic communications department at Humber, said it was nice to see Humber rewarded for their hard work on the pitch.

“I guess the first word I’d use is proud,” he said. “They went undefeated and they came home as champions.”

Lepp said the team has a winning culture and the coaching staff is a big reason behind that.

“They recruit well, they train well, everything from the top down starts with the head coach and the coaching staff,” Lepp said.

Uccello said Humber’s consistent wins show how great the program is. He said everything from the coaches, players, medical staff, and equipment guys produce excellent quality.

Aquino said the reason behind the Hawk’s continuous victories is the work ethic, commitment, and dedication of the coaching staff.

“Once the players come on, they buy into our coaching style and our tactics, and they put in place what we want from them from game to game,” said Aquino.

The Sting got two red cards during the game. Seneca’s Alex Lewis was given a red card after kicking Hawk’s goalkeeper Holger Xhameta. Seneca had to play with 10 men after Lewis was sent off.

The Sting were cut down to nine players when Seneca’s Francisco Thomas Cerros was given a red card due to embellishment in the 80th minute.

Following the win, the Humber Hawks comment section was full of praise but there were negative comments from Seneca fans, too.

Aquino said the referee was there to guide the rules of the game and he felt that those cards were something that was required.

“The opposition feels as if they were wrong wrongfully executed, but at the end of the day, that’s the referee’s job,” said Aquino.

Lepp said the photos and footage from the game clearly show that Seneca’s player was stepping on the face of Humber’s keeper with his cleats.

“The picture doesn’t lie,” he said.

Uccello said people should understand that at the end of the day, there’s only one team that can win.

“They were probably just upset that we have another national championship under our belts,” said Uccello.

Uccello said this was his last year of eligibility but he will keep supporting the Hawks for the rest of his life.

“It’s just a pleasure to play for Humber and be a Hawk,” he said.