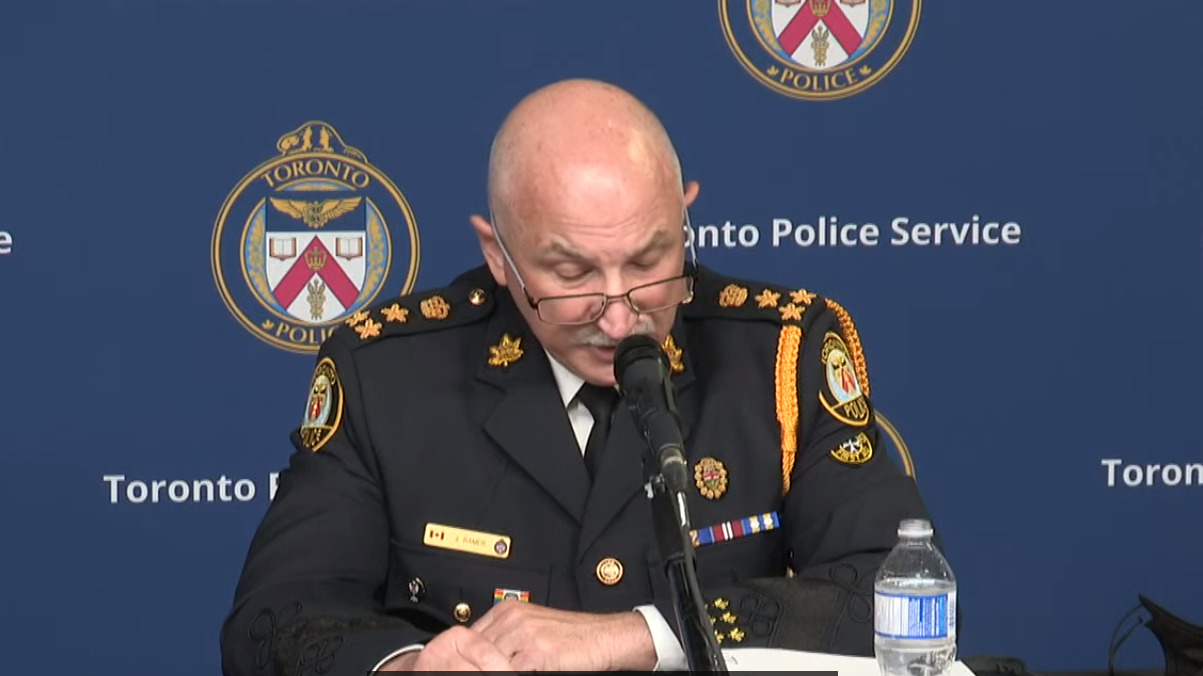 Toronto Police Chief James Ramer has apologized to Black, Indigenous, and racialized people in Toronto today as the force released race-based data on the use of force and strip searches.

“I am sorry, and I apologize unreservedly that the release of this data will cause pain for many,” Ramer said at a news conference.

The released statistics show that Black people in Toronto have faced an excessive amount of police enforcement and use of force in 2020.

The statistics also revealed that Black residents were 230 per cent more likely to have an officer pointing a gun at them than white people, regardless of being armed or not.

The statistics have also shown differences in enforcement, use of force, and strip searches among other racialized groups, including Middle Eastern, Latino, and East and Southeast Asian groups.

Middle Eastern people were overrepresented when it came to enforcement and use of force in 2020.

Latino and East and Southeast Asian groups experienced more use of force when interacting with police in Toronto.

Indigenous people, however, experienced more enforcement and less use of force in the more than 86,500 Toronto police interactions that have been reviewed.

Ramer said Toronto police should do more to stop any racially biased policing practices in Toronto and that the data reflects the “unfortunate” experiences that people of colour had to endure.

“This data demonstrates the unfortunate realities of those experiences,” he said. “As an organization, we have not done enough to ensure that every person in our city receives fair and unbiased policing.”

Ramer said Toronto police will continue their efforts to end systematic racism and discrimination that has led to “differential treatment by our service.”

“We recognize that it is essential to identifying ways to reduce and eliminate disparities measure and evaluate improvement and continually look for ways to live up to the goal of equitable policing,” he said.

The apology has been described by Beverly Bain, from the group No Pride in Policing, as a “public relations stunt.”

“Chief Ramer, we do not accept your apology,” Bain said during the news conference.

Executive director of Peacebuilders Canada Marlon Merraro said the Black community in Toronto has not been asking for an apology and that stopping violence and the racist, oppressive action of the police service should have been the priority.

“My initial reaction was anger because we did not ask for an apology,” Merraro said. “It’s really difficult to come to hear the apology when we’ve been denied, not believed, ostracized, penalized for telling the stories that we’ve experienced.”

He said holding police accountable by applying the proper mechanisms and policies that ensure no violations go without penalty should be one of the top priorities.

“Chief Ramer talked about a lot of mechanisms already existing, but what he failed to tell us was if those mechanisms were working, and obviously they are not working,” Merraro said.

He said Toronto Police are not serious enough in their endeavour to end systemic racism in policing in Toronto.