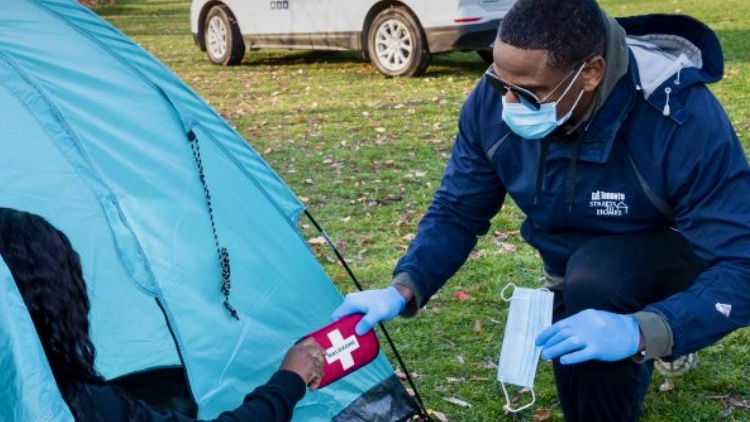 The city of Toronto issued a press release last week announcing the hiring of 15 additional street outreach counsellors to help the homeless, but one outreach worker says more homes are needed.

The counsellors are part of the city’s Street to Homes initiative, which strives to mitigate the degree of homelessness in Toronto. Harm reduction counsellor Camille Balda said the city can hire as many outreach workers as they want, but it will not mitigate the issue unless there’s more housing.

“The fact of the matter is there is not enough affordable housing,” she told Humber News. “There’s not enough social assistance housing or independent housing for folks who are experiencing homelessness.”

The city’s own assessment in 2021 found about 7,350 people are homeless at any time, but other organizations suggest the number is higher.

The 15 new positions were approved as part of this year’s municipal budget, part of an $1.8 million initiative to combat homelessness.

This recent commitment will drive up the Street to Homes staff count to 41.

Since the pandemic began, the Street to Homes program has been rather successful.

In total, the program has referred just over 2,400 individuals to a shelter or hotel program. In addition, Streets to Homes has assisted over 600 homeless people in finding permanent and stable housing.

Toronto continues to experience heightened homelessness, and as a result, the city’s shelter system is the largest in Canada.

The shelter also serves as a space for transitional housing for individuals requiring additional support and Balda said she was an outreach worker for a period of a time dealing with harm reduction.

“I think outreach work is the most frontline, the most grassroots, the most low-barrier support that a person can get,” she said.

Balda said outreach counsellors are extremely valuable, as they can follow people experiencing homelessness no matter where they are living.

However, she said outreach work still does not tackle the issue of there not being enough affordable housing in the city.

“You can’t just hire more workers and expect people to be housed,” Balda said. “There’s literally nowhere for anyone to go.”

She said the wait lists for many of these programs are up to a decade long.

“If you’re lucky, you have priority access,” Balda said. “Maybe you’re waiting a couple years, but that’s still a couple of years of your life in a shelter.”

She said more workers can always assist in managing the high case loads that shelters continue to face.

“I had a friend who was at a drop-in centre and her caseload was consistently 60,” Balda said. “How are you supposed to support 60 people?”

She said although the Street to Homes program does amazing work, homeless people in Toronto continue to require more resources, including homes.