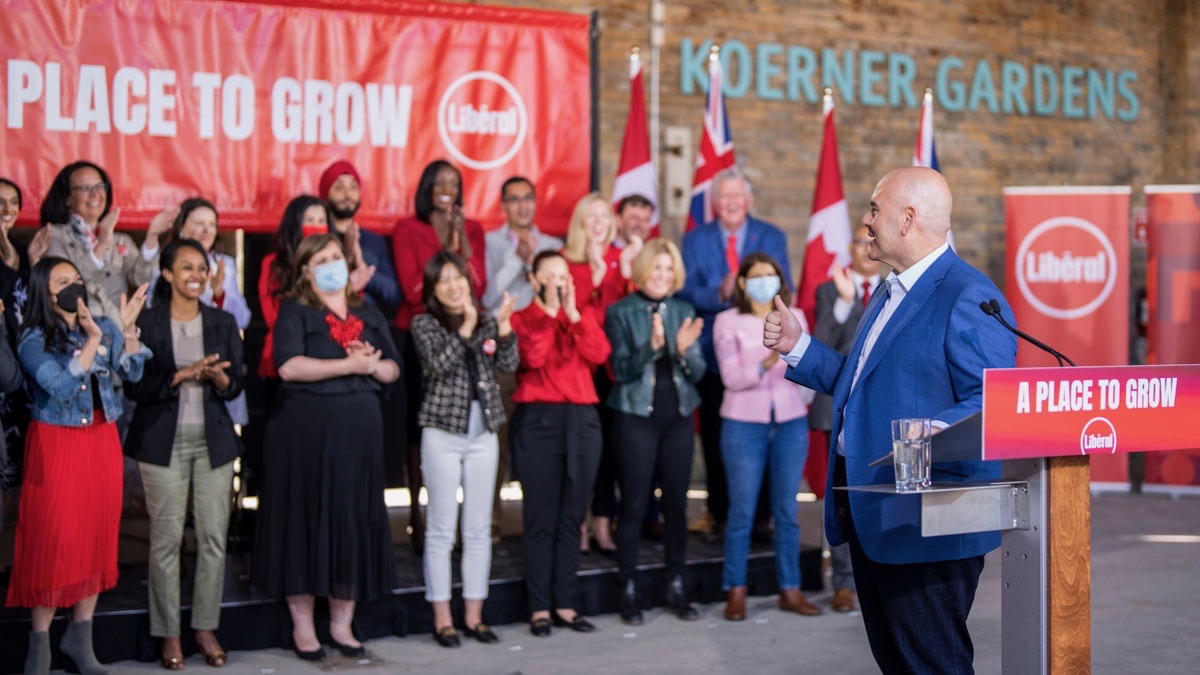 Ontario Liberal leader Steven Del Duca is facing two challenges this election: recovering from his party’s devastating 2018 loss and winning his own seat.

He is running for MPP in the Vaughan-Woodbridge riding this year after losing his seat to Progressive Conservative Michael Tibollo in the last provincial election.

In a new survey conducted by Nanos Research, 24.1 per cent of respondents listed Del Duca as their preferred choice for premier, behind PC Leader Doug Ford who had 29 per cent of support.

The 48 year-old politician was born in Etobicoke to Scottish and Italian immigrant parents. He lives in Woodbridge with his wife Utilia Amaral and their two daughters.

Del Duca went to law school after graduating in political science and history and later worked in public affairs with a labour union.

He was voted leader of the Ontario Liberal Party in 2020 after former premier Kathleen Wynne resigned in 2018.

The Liberals lost over 50 seats after the last election in “the worst electoral defeat in Ontario history.”

Del Duca served as the Minister of Transportation and later Minister of Economic Development and Growth under Wynne’s leadership.

Some political experts say Del Duca now faces the challenge of leading a third opposition party as a relatively unknown leader to Ontarians.

Emmanuelle Richez, associate professor of political science at the University of Windsor, told Humber News Del Duca is working towards becoming a more recognizable face of the Liberals.

“He’s been trying to talk not only about his platform and his ideas but talking about him as a person,” she said. “He’s trying to sell himself as a suburban dad from the middle-class – trying to connect with voters that way.”

Richez said Del Duca has also been a target of negative advertising from other parties that have attempted to paint him as Wynne’s “right hand man.”

On the other hand, Andrew McDougall, University of Toronto associate professor of political science, said comparing Del Duca’s leadership in a pandemic era Ontario to Wynne’s government may not be a fair comparison.

“I think Kathleen Wynne, when she came to power, was speaking directly to kind of a different Ontario than post pandemic, sort of inflation Ontario, housing crisis Ontario. Now this is maybe a little bit different. So I don’t know whether or not it would be totally fair to draw those in parallel.”

“Steven is one of the smartest, hardest working people I know,” he said.

Fraser said Del Duca has had to find alternative solutions throughout his leadership without a seat at Queen’s Park.

“When you have a seat and you’re at Queen’s Park four days a week, you’re exposed to the media and you’re in the legislature and people can see you there,” he said.

“The alternative to that is to do what Steven did, which is just to get out to the places where people are and have a kind of a community-based approach,” Fraser said.

Richez said Del Duca wouldn’t be able to stay on as the Liberal leader if he doesn’t win his riding this election.

But McDougall said not being in the provincial Parliament may not have as big an impact on a politician’s ability to do their job.

He said the release of the Liberal’s official election platform yesterday is an opportunity for people to see what Del Duca has been working on outside of parliament.

Del Duca has criticized Doug Ford for cutting supports for communities. He said the PCs “side with billionaires and big box stores over workers and small businesses,” in an official online statement.

They would also use the savings from scrapping the proposed Highway 413 to invest in schools.