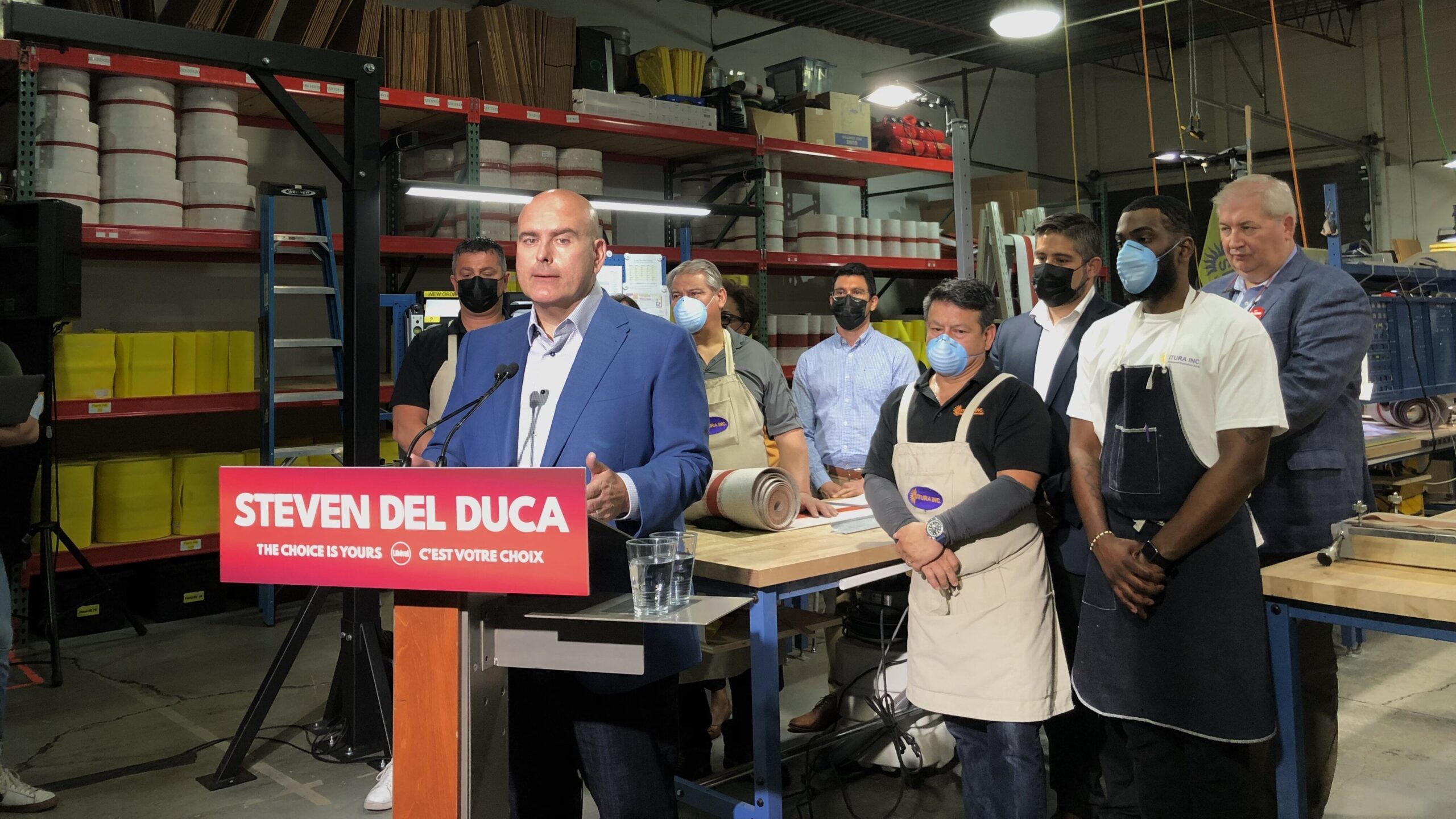 By Malav Contractor and Sydney Vardja

Steven Del Duca may be working seven days a week during the election campaign, but today he tried to talk about encouraging more workers to try four-day workweeks.

“It’s for your own mental health, for your ability or freedom to spend time with your kids,” he said.

The Ontario Liberal Leader promised to launch a four-week demonstration project but provided few details about how it would work, or who would be involved.

So reporters instead asked Del Duca about last night’s debate.

Del Duca said he doesn’t feel bad for Premier of Ontario Doug Ford who said times were tough throughout his time as premier.

“The fact that Doug Ford wanted us to have sympathy for him I thought was absolutely outrageous,” he said.

“We will be putting workers, families, and small business entrepreneurs right at the centre of every single decision we make,” he said.

Del Duca’s event took place on the factory floor of a company that manufactures waterproofing materials. Situra Inc. has offered employees a four-day workweek for more than a year.

“You work better, you get to spend more time with your family,” he said. “I also think it’s good for the economy because we spend more money having an extra day off work.”

Del Duca said the four-day workweek demonstration would be used to get information back to see how it’s received.

He said the Liberals would also involve the private sector, the academic world, experts, and worker advocates.

Steven Tufts, Associate Professor at York University and expert in workers and workplaces, said four-day work weeks are nothing new.

He also said that pilot projects stack the workday for people rather than shortening the workweek.

“So if you’re working 35 hours and you’re doing five, seven-hour shifts, you may just have that seven hours distributed over Monday to Thursday,” he said. “So you’re not actually shortening working time, you’re just having your schedule reduced from five days to four days.”

Tufts said another problem was regarding who’d benefit from the four-day workweek plan.

“It does nothing to address the precarity of workers who will have to work flex hours like delivery drivers or multiple job pool holders …” he said. “There’s nothing in that plan that talks about reducing work time, at least not aggressively for a broad part of the working population.”

Tufts said he believes that the Liberal party would actively work on the plan if given the power.

But he also said this idea could take years thanks to pilot projects, research, and possible resistance from the Ontario Chamber of Commerce.