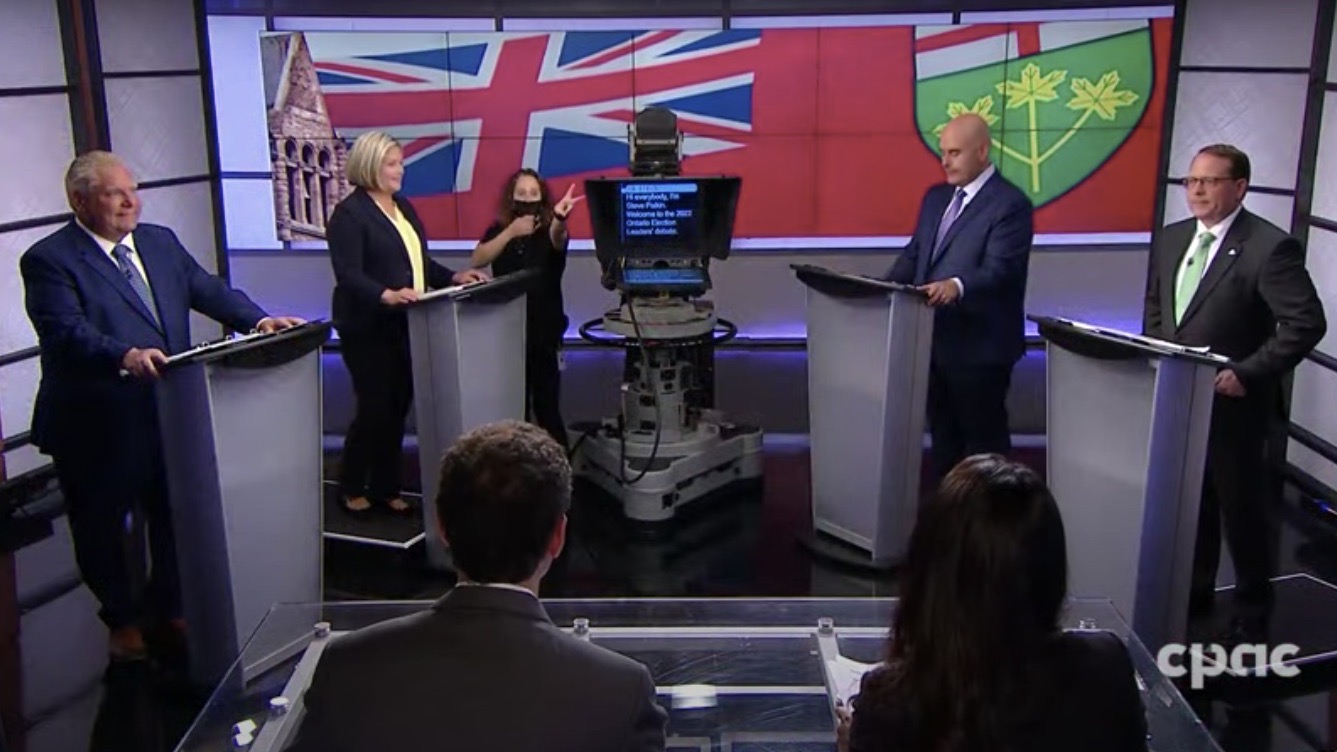 The leaders of Ontario’s four main political parties debated the need for Highway 413, the carbon tax, and investments in electric vehicles and green jobs.

PC party leader Doug Ford defended his party’s decision to build a new highway that would run through Peel, York, and Halton regions.

Ford said the $10 billion project would save commuters half an hour of travel time each way and help move people and goods across the province as the population increases in the coming years.

The other three party leaders, from the NDP, the Liberals and the Greens, committed to stopping it.

Ontario Green party leader Mike Schreiner called Highway 413 a “climate disaster” which would pave over around 2,000 acres of farmland and cut through the protected Greenbelt.

Ontario Liberal party leader Steven Del Duca contested Ford’s claims and said that the highway would save commuters only around 30 seconds. He said that his party would slash transit fares down to $1 a ride and help take an estimated 400,000 cars off the roads.

“By choosing to build highway 413, you are choosing to destroy huge waves of farmland, and you’re choosing simply not to take seriously any attempt to meet our carbon emissions,” Pothen said.

He says the upcoming election is crucial for deciding the future of the province’s environment.

“Ontario is careening headlong towards a cliff edge,” Pothen said. “Unless we make some really dramatic U-turn changes, we’re going to have long-term environmental damage that will be very hard to reverse.”

Ford accused the other three leaders of wanting to bring back a carbon tax that would further raise gas prices.

Pothen said carbon taxes are a negligible part of the affordability crisis.

“Getting rid of carbon taxes will not have a meaningful impact on people’s lives. What will, is making investments that allow people to do everything they need to do to live happy lives, to go on trips and holidays without having to get into their cars,” Pothen said.

Schreiner said there is a need for “new solutions to old problems” to build a climate-ready Ontario. He said his party would work toward making electric vehicles affordable for the average person and help them save around $2000 on gas every year.

Pothen said doing things in an environmentally friendly way does not mean giving up jobs.

Pothen said he was pleased that at least three of the parties were “embracing a lot of the right solutions.”

“We’d like to see Ontario elect a Legislature that is committed to using the next 30 years of homes and workplaces to meet our environmental obligations, rather than make things worse,” Pothen said.