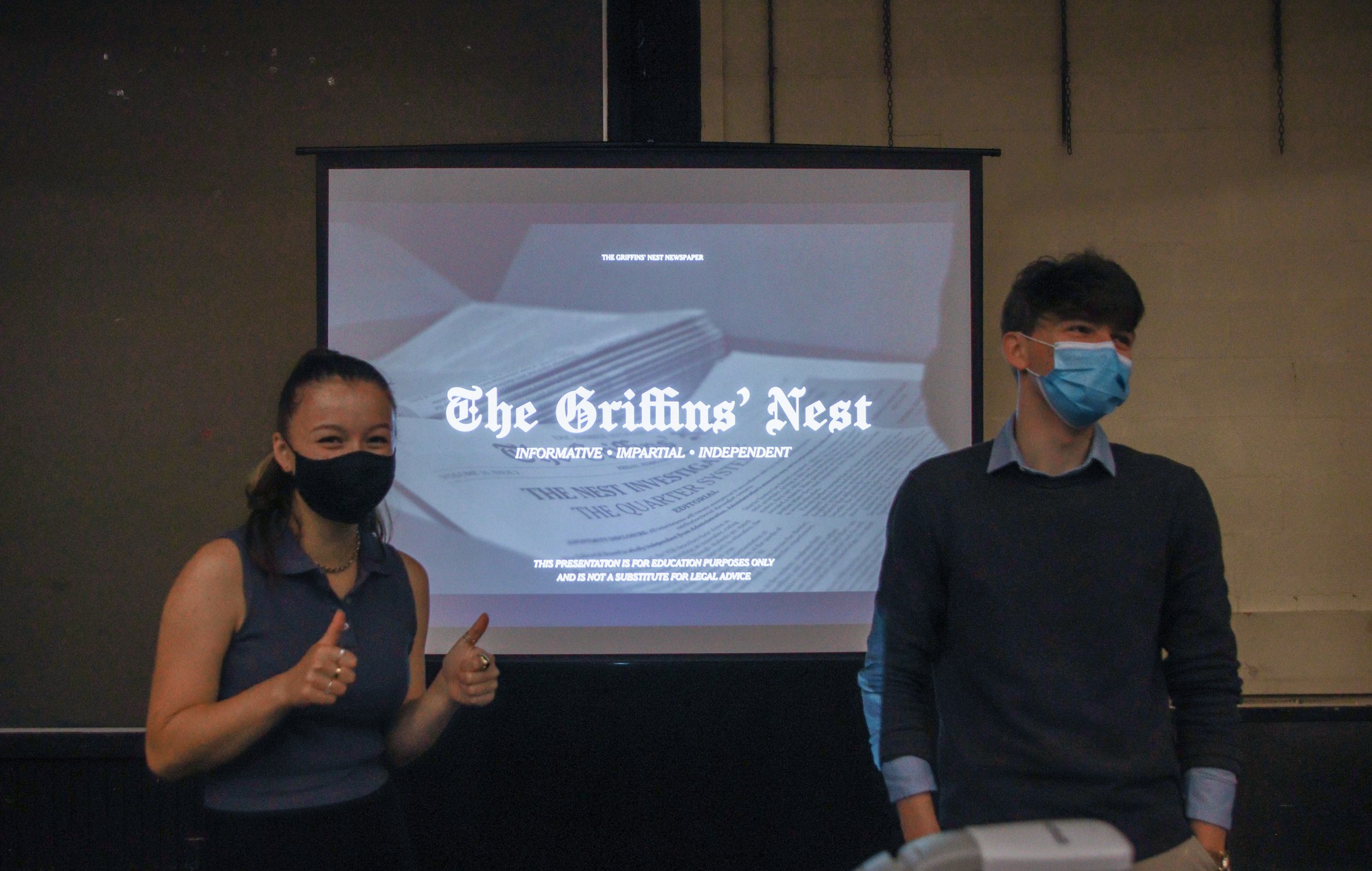 Spencer Izen and Jessica Kim, the Editor-In-Chief and Managing Editor, are just two of five students that make up the editorial board of The Griffins’ Nest, a student newspaper of nearly 60 active reporters running out of Eric Hamber Secondary School.

Last year, student journalists at The Griffins’ Nest got an unexpected lesson in press freedom, which spearheaded an effort to make sure no other student papers had to go through what they did.

According to Izen and Kim, there were several instances of censorship last year that led them to draft the Student Press Freedom Act (SPFA).

The Girffins’ Nest had written an editorial on the school’s implementation of the quarter system, consisting of four 10-week sessions in the fall, winter, spring, and summer, that they say neither student nor faculty was thrilled about.

But when they took their story to the school’s VP for vetting they were left stunned by his response.

“The first thing that he said was ‘you know those pulled quotes you have there, you know you can really read them,’” said Kim.

The editorial was eventually published and The Griffins’ Nest was able to continue writing.

The team set their sights on their next big story.

“We decided to take a crack at overall district policy-making and the level of student-teacher input put into that decision-making,” said Izen.

They spoke to over 100 students and a dozen teachers about how well they thought the school district was listening to their concerns and found that virtually nobody thought that they were being consulted meaningfully in any way.

They send the school district’s communications office a request for comment, to which they responded but also forwarded their email to the school principal.

The school’s VP caught wind of what they were writing and told the students the article required the Principal’s blessing.

They were concerned this was another threat to their Charter rights.

After consulting with the teacher who worked with them on the paper, Izen and Kim wrote a letter to the British Columbia Civil Liberties Association (BCCLA).

A day later The Griffins’ Nest was formally told to stop sending their paper to the printers and to cancel their orders.

“We do feel like a half a million-dollar public body is actually working against us,” said Izen. “It became part of their official role as employees of a government institution to suppress the freedom of the press and freedom of expression.” 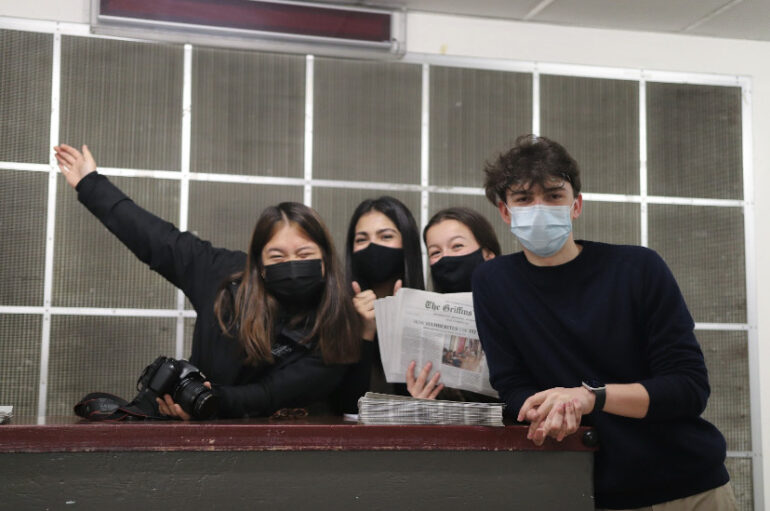 Since then, the two have received support not just from the BCCLA, but also from the Canadian Youth Journalism Project and the Canadian Association of Journalists (CAJ).

“Journalism is one of the noblest professions on the face of the earth,” said Brent Jolly, President of the CAJ.

“And what we’re seeing more and more now is people who care, who really, really care and want to see and make the world a better place,” he said.

Before The Griffins’ Nest could continue writing they had been informed that they would have to submit any FOI requests to teachers before submitting them, which Izen and Kim said was yet another direct infringement on their rights and freedoms.

Immediately the two contacted lawyers regarding the issue as meetings between the school staff regarding the fate of The Griffins” Nest were also being held.

The organizations that had since supported the student journalists had all written letters to the school addressing its wrongdoings, but before any of the letters could be sent out, the school had switched its decision.

Izen and Kim suspected the change had something to do with the fact that the student journalists were not permitted to attend any of the meetings discussing the fate of the paper.

Being a school club The Griffins’ Nest has only got a taste of what journalism students are having to continuously go through.

Determined to do something, they worked with some pro-bono lawyers to draft a proposed law: the Student Press Freedom Act. The SPFA was drafted with the Canadian Charter in mind, specifically Section 2(b).

It states that student journalists have rights to freedom of expression and freedom of the press, regardless of whether a school supports them in the creation of student media.

“They don’t seem to learn, which is all the more reason that we need the SPFA,” said Izen.

“The obstruction does not stop,” said Izen. “It is very well known that in our school community and the broader Vancouver school district the Vancouver school board has a hostile relationship with press freedom from students. That is not a question anymore,” he continued.

The student’s proposed law does allow for oversight. It acknowledges several scenarios where teachers or school board administrators can prevent students from publishing, such as stories that include obscene or libellous material, or content that poses a threat to the safety and security of the school.

Francesca Fionda is an Investigative and data journalist and Journalism instructor at the University of British Columbia.

“Student journalists are really important. They have access to communities and stories that really need to be told, and they have their unique platform as well. Student newspapers reach their colleagues and classmates in a way that other news organizations can’t,” she said. 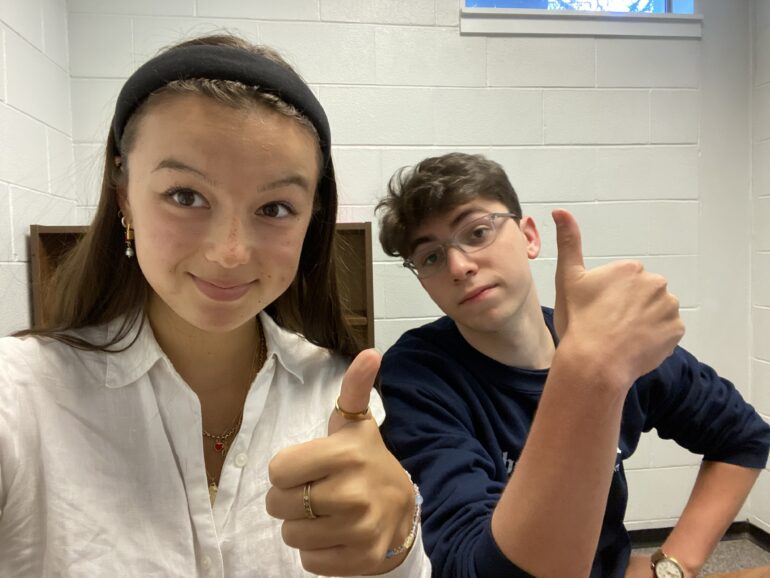 Izen and Kim both explained they haven’t had as many run-ins with school administration this year, but still face restrictions caused by a new provincial law, BILL 22: the Freedom of Information and Protection of Privacy Amendment Act.

BILL 22 allows administrators to charge a 10-dollar fee just to fill out an FOI request.

Although the Student Press Freedom Act (SPFA) has been presented to BC’s Attorney General for consideration, it is not currently a priority for the government.

Izen and Kim are hopeful that the act will be addressed in the 2023-2024 legislative calendar.