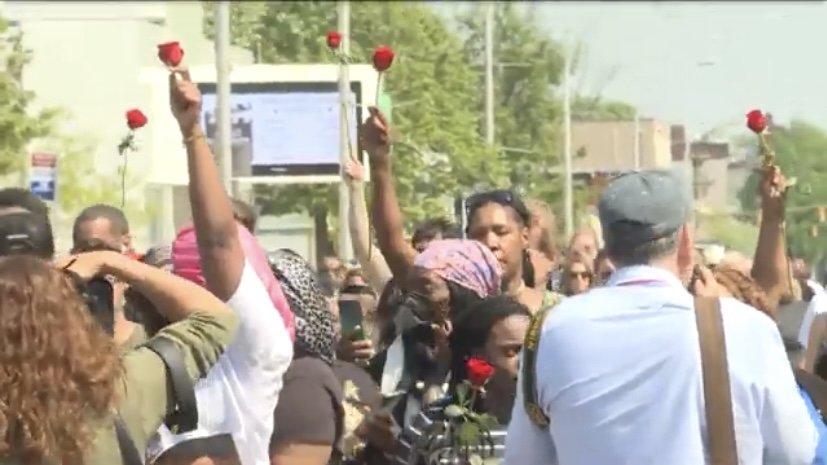 The Black community is coming together for a public vigil at Nathan Philips Square in support of the victims in Sunday’s mass shooting in Buffalo New York.

The vigil is scheduled for 6 p.m. Thursday evening and will have appearances from mayor John Tory, MP Marci Ien and other officials.

Over 21 community groups from across the greater Toronto area will be showing solidarity for the tragic event.

Members of the public will be able to express their condolences with grieving members of the Black community.

Vigil organizer Alica Hall said the vigil is Canada’s efforts at holding space for solidarity in a tragic occurrence that effects more than just the United States.

“We recognize there is a need to bring our community together to create space for them to grieve and to feel a sense of belonging because incidents like this remind us of the vulnerability that we have as Black people living our day-to-day lives,” she said.

Payton Gendron gunned down a total of 13 people 10 of which were of African American decent at Tops Friendly Market on Saturday.

The 18-year-old suspect has been indicted on charges of first-degree murder.

Gendron posted hundreds of documents to online discussion boards where he detailed his plan for murder as well as his racist ambitions.

Investigators are examining a private diary Gendron kept on the online social media platform Discord where he discusses his obsession with white supremacist ideologies.

Gendron targeted Tops Friendly Market because of the large African American population in the Buffalo region.

He travelled three hours from his home close to New York, Pennsylvania to Buffalo with a Bushmaster xm-15 riffle where carried out his attack.

The Black community is igniting conversations on social media about racism and white supremacy still being relevant in current society.

Hall said the murder of 10 Black people is just another reminder that racism is still alive and very much affecting society.

“Just two hours away from Canada people are being murdered because they are Black and the reason and inspiration behind the killer’s motive is an ideology that’s more commonly acceptable than most people think. Hate affects many communities so really all Canadians should be concerned,” Hall said.