Saudis willing to sell oil to China in Yuans rather than U.S. dollars 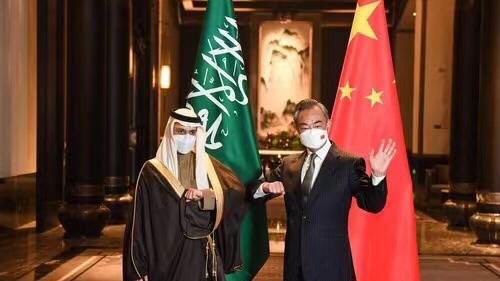 Saudi Arabia is in active talks with Beijing to price and sell its oil in Yuan instead of the U.S. dollar.

Experts are concerned that Riyadh’s shift towards Yuan could potentially deter the dominance of the U.S. dollar in the global petroleum market.

Around 80 per cent of the international oil sales are made in U.S. dollars. The kingdom has sold oil in dollars since 1974 in a deal with the Nixon administration that includes security guarantees for the country.

The Yuan will get the boost it needs if Saudi Arabia prices some of its 6.2 million barrels per day of crude exports in the Chinese currency instead of dollars.

Lawrence Booth, an economics professor at the University of Toronto, said China introduced the concept of Yuan-priced oil contracts in 2018 to serve as an alternative for crude exporters to sell oil in another currency instead of dollars.

Beijing is particularly pushing to boost the Yuan’s profile now even more. Using dollars has become hazardous in the last few years, especially after the U.S. and EU blocked the Russian central banks from the SWIFT banking system.

“China wants to create an alternate system where Yuan could be exchanged for any other currency directly rather than using the same system that can be used against them,” Booth said.

The talks between Riyadh and Beijing have been ongoing for six years but have accelerated with the kingdom’s growing unhappiness towards Washington regarding their security assurances.

Riyadh is upset with the U.S. for many reasons, including the hasty withdrawal from Afghanistan in 2021, lack of support for the country’s intervention in the Yemen civil war, and the revived talks for Iran’s nuclear program.

The relationship between Washington and Riyadh has further deteriorated under President Joe Biden’s administration, who vowed to treat the kingdom as a “pariah” during the 2020 election campaign for murdering the Saudi journalist Jamal Khashoggi in 2018.

Arnd Jurgenson, an International Relations professor at the University of Toronto, said Saudi Arabia and many other countries are particularly concerned about the stability of the dollar and the U.S. exercising of its economic power through sanctions.

The Western sanctions against Russia have become a wake-up call for some countries, including Saudi Arabia and the United Arab Emirates, to seek options to reduce their reliance on the U.S. Secondly, other countries fear that they could be targets of severe economic sanctions if they cross Washington.

“To a large extent, it seems like Washington’s aggressive use of economic power has alienated the international community’s view towards the U.S. as a reliable partner,” Jurgenson said.

While Beijing promotes its global ambitions for the Yuan, some experts believe Africa is the most likely place where it could displace the dollar.

Jurgenson said while he doubts this, it is not impossible because China is currently the biggest creditor to African economies, including Nigeria, Sudan, and Angola, making significant investments in their infrastructure compared to the United States.

A Saudi official familiar with the talks acknowledges the shift toward Beijing and said that Saudi Arabia values China’s contribution to their economy as they offer many lucrative incentives to the country.

“China is offering everything you could possibly imagine to the kingdom,” the official told the Wall Street Journal.

China is helping the kingdom by consulting them on its nuclear program, helping them build their ballistic missiles, and investing in the Crown prince’s projects such as Neom, a new futuristic city.

The kingdom’s oil export to China has increased in the past decade. China imported almost 1.76 million barrels of crude oil from Saudi Arabia in 2021.

On the contrary, the oil trade between the U.S. and Saudi Arabia decreased significantly to 500,000 barrels a day in 2021 from two million barrels a day in the 1990s, according to the U.S. Energy Information Administration report.

Booth said Beijing establishing the Yuan as a reserve currency could take some time. The U.S.’s advantage over Beijing is the transparency of its currency.

He said China devalues its currency occasionally to boost exports, and it is doubtful that countries would like to hold that type of currency.

“I highly doubt that Beijing’s currency systems would be as open as the traditional international transaction systems like SWIFT,” he said.

Booth said that sometime in the near future, the world could expect the probability of a movement towards multiple currency market with less reliance on the U.S. dollar.