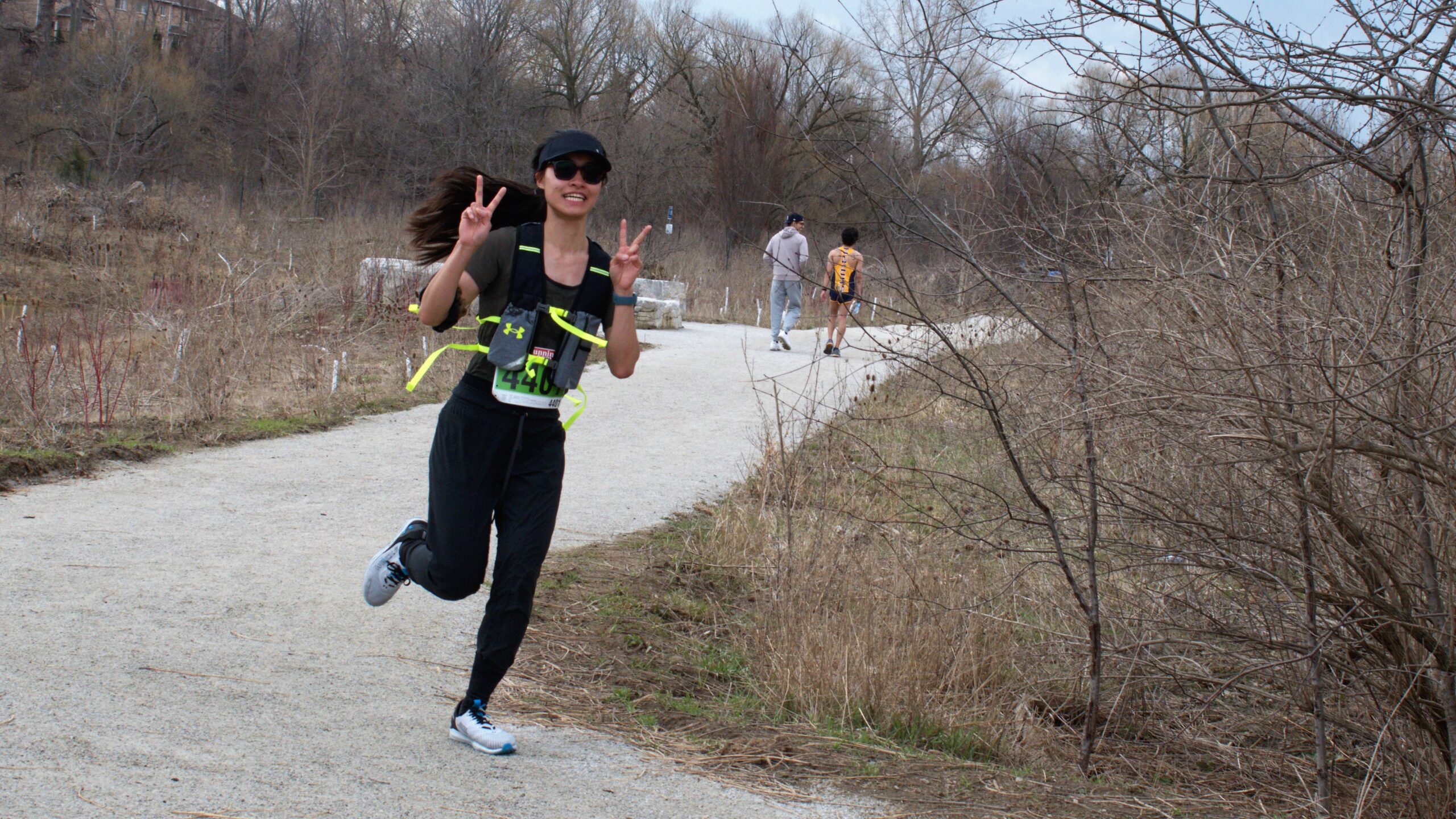 Umar Butt, a second-semester student in the Fitness and Health Promotion program, was alone as he crossed the finish line first at Humber College’s 5K Run/Walk.

Winning the short course wasn’t his motivation for being a part of the college’s “Comeback” race on April 7. Butt said he loved seeing the students gather and motivate each other.

“It’s all about positivity,” said Butt, who is a part of the varsity cross-country roster for the Humber Hawks.

“I feel that everybody is cheering on one another, doesn’t matter if they come first or last place,” said the first-year student originally from Montreal. 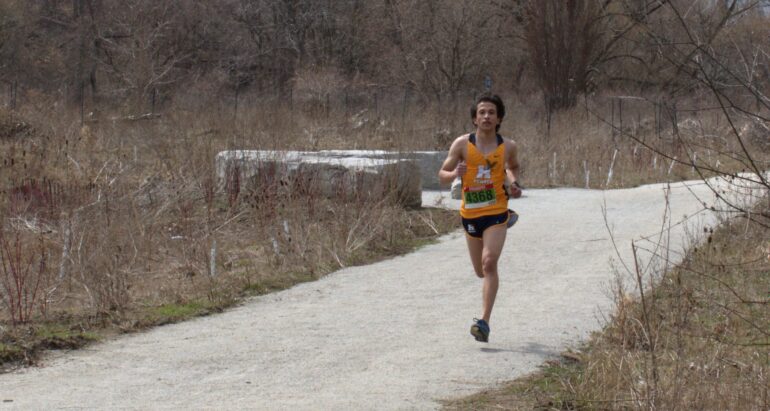 Umar Butt, a second-semester student in the Fitness and Health Promotion program, was the first to cross the finish line at Humber College's 5k Run/Walk. He is a part of the varsity cross-country roster for the Humber Hawks. Photo credit: Harsh Grewal

The college’s 15th annual 5K Run/Walk at North campus saw 95 people run or walk the course. It was dubbed “The Comeback” because it had not taken place since April 2019 because of the COVID-19 pandemic.

The event was organized by the third-semester Fitness and Health Promotion students as a part of their Special Events Planning course.

Carmen Puyo, the course instructor for Special Events Planning, said she was proud of the students’ work, who had been online for the last few semesters.

“Being able to do an actual real event like this, I think, was something that they definitely needed,” Puyo said.

The participants included runners from the Humber cross-country team, students, staff and people from off-campus. 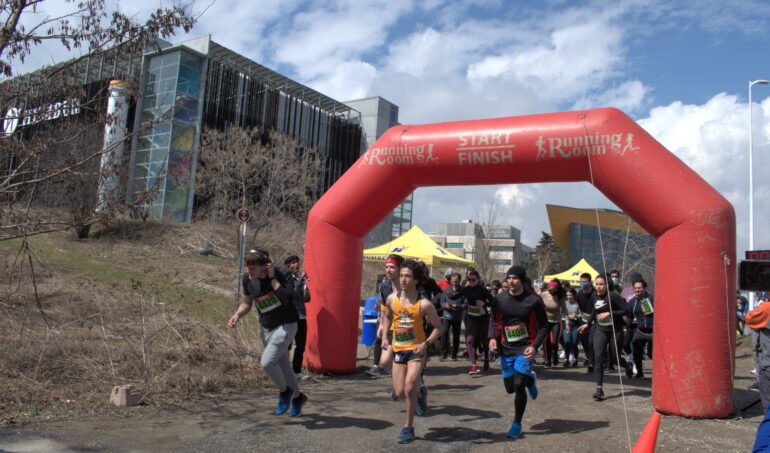 The run/walk kicked off at 12 p.m. Ninety-five people participated in the event, including included runners from the Humber track team, students, staff and people from off-campus. Photo credit: Harsh Grewal

The event raised $2,525.90 for Stella’s Place, a charitable organization that provides free mental health care to young adults between 16 and 29 years of age.

Dagmar Schroeder, spokesperson for Stella’s Place, said young adults are under-serviced in the health system and the organization fills the gap by offering mental health services to young adults who cannot afford them.

“Fundraising is very difficult, and to raise $2,500 is phenomenal,” Schroeder said. “It has been a huge success.”

Sponsors for the event provided beverages and snacks for the participants. There were coupons, gift cards, and other prizes for the winners, a raffle contest, and a DJ stand.

Jacob Saphra, part of the organizing team, said they were excited to bring people together for a good cause at one of the first major student group events on campus since classes reopened.

“We’ve been telling people this isn’t about fitness, this is about getting together,” Saphra said. “Whether you run fast or you walk slow, you should come out.” 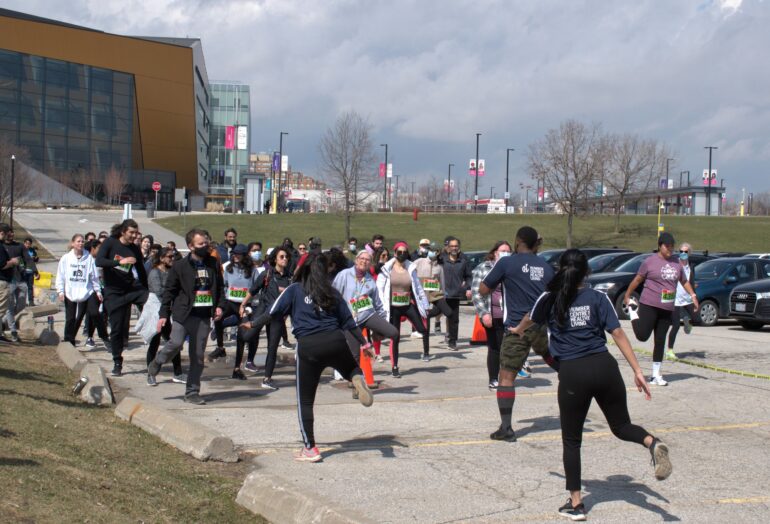 Guneet Kaur said it was her first time participating in a run/walk.

“I haven’t really done a walk/run before, but it’s exciting,” she said.

“I’m with a friend, it’ll be fun, a bonding experience,” said Kaur, who is a second-semester student enrolled in the Fitness and Health Promotion program.

Jenny Huynh, a student in Exercise Science and Lifestyle Management at Humber, was the first woman to cross the finish line and was fourth overall.

She said the race was “a nice prep” for another 7K race she would be joining on Saturday. 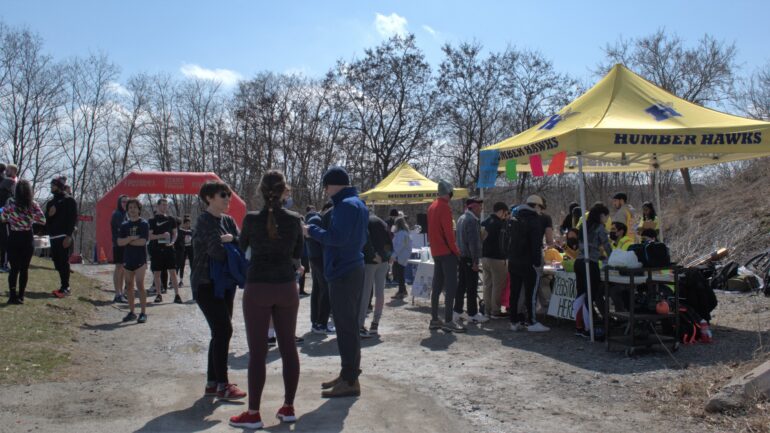 On-site registration for the event started at 11 a.m. The start and finish point of the run/walk was near Parking Lot 4 at Humber College's North campus. Photo credit: Harsh Grewal

“It’s good energy for everybody. Everyone’s going at their own pace,” Huynh said. “It was really nicely organized. I came and I knew exactly where to go.”

Runner Miguel Salas said he’s happy the event is back.

“I haven’t taken part in an event like this in a long time, so I just wanted to participate and have fun,” said Salas, who learned of the event through a friend at Humber.