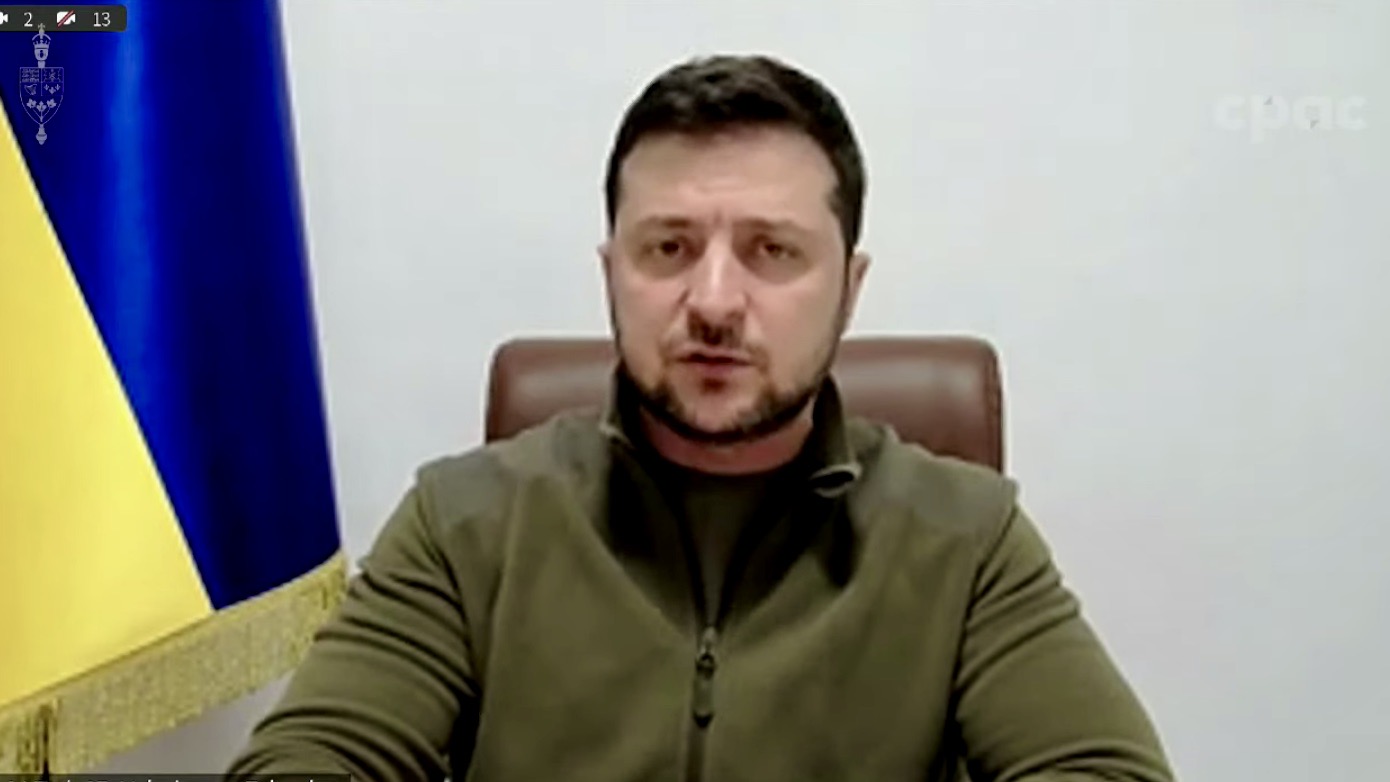 Ukrainian President Volodymyr Zelenskyy urged that Canadian politicians “need to do more” against Russia during a virtual address to the House of Commons on Tuesday.

Zelenskyy came with a message and a request, “please do not stop in your efforts. Please expand your efforts to bring back peace in our peaceful country.”

The President explained to Parliament the difficulties facing Ukraine.

“Imagine cruise missiles falling down, and your children asking you, ‘what happened?’” he said.

“Dear Justin, dear guests: can you imagine that every day you see memorandums about the number of casualties, including among women and children? You heard about the bombings: currently, we have 97 children that died during this war,” Zelenskyy told the House.

Canadian politicians, including Prime Minister Justin Trudeau and Interim Opposition Leader Candice Bergen, each expressed their gratitude to the Ukrainian president for his courageous leadership against Russia and in the defence of democracy.

Arguably the most moving response to Zelenskyy came from Green Party member Elizabeth May, who urged the world to find the tools needed to achieve peace.

Zelenskyy acknowledged the House for supporting Ukraine with military and humanitarian aid and “serious” sanctions on Russia, but he also pled with them to, “please, close the sky.”

David Cortright, a peace scholar, author, and director of Policy Studies at the Kroc Institute for International Peace Studies at the University of Notre Dame, was not optimistic Canada would grant Zelenskyy’s request to close the sky.

He called it a “non-starter” with “potentially horrendous consequences.”

Robert Austin, a professor at the Munk School of Global Affairs at the University of Toronto, who specializes in eastern European politics and relations, said granting a no-fly zone would be considered, “an act of war,” and would, “widen the war immediately.”

Interim Conservative Leader Candice Bergen said Canada and its allies must do more to at least secure some air space to allow refugees to flee the country.

“We need to protect, at a minimum, the airspace over the humanitarian corridors,” she said.

Zelenskyy said also called for stiffer sanctions against Russia as current military support and sanctions imposed on Russia by Canada and its NATO allies “unfortunately, did not bring an end to the war.

“Increase sanctions so they will not have a single dollar to fund their war effort,” he said.

Cortright agreed, saying that a continuing enforcement of sanctions is important in.

But Austin said increased sanctions might just be what Putin was preparing for, as “isolation is a long-term goal” along with eliminating all western influence. It could assist Russia in anchoring itself into a new reality.

Deflecting blame for the hardships the Russian people will face, including its own leadership and the west, will become a problem, if it isn’t already, Cortright said.

Today, the average Russian is facing severe repercussions from the Kremlin for any dissenting opinion, he said.

Although Cortright is optimistic diplomatic channels to peace have remained open, others such as Austin and Zelenskyy don’t share the same feelings toward the on-going peace talks.

“Peace talks are a fraud,” Austin said, “Russia is not willing to put anything on the table that Ukrainians can swallow.”

The bombing of civilian targets reveals Putin’s goal and that is not to build a relationship with Ukraine, he said.

Zelenskyy was blunt in his assessment of Russian initiatives in Ukraine in his address to the House.

“This is their main objective,” he said.