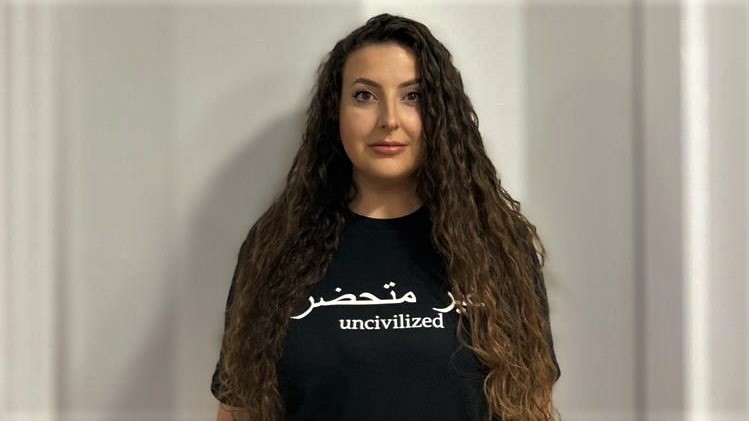 It was not usual for Jessica Halabi, 35, an Edmonton fashion designer, to be called “uncivilized” in the news as someone who has a Middle Eastern heritage.

But that did not deter her from turning her design talent into a tool against racism by designing T-shirts with the word “uncivilized” and its Arabic translation on the front.

“There were so many things happening in the media,” Halabi said. “We were just like in shock about what’s happening as we suddenly have a different name”.

The news coverage of the Russia-Ukraine war has exposed bigotry and racism, as some foreign correspondents have made racist comments against certain nations or regions by attempting to normalize the crises in the Middle East and other “uncivilized” parts of the world.

CBS News senior foreign correspondent Charlie D’Agata said Ukraine “isn’t a place, with all due respect, like Iraq or Afghanistan, that has seen conflict raging for decades. This is a relatively civilized, relatively European – I have to choose those words carefully, too – city, one where you wouldn’t expect that or hope that it’s going to happen.”

While journalist Phillipe Corbé said on BFM TV that “we’re not talking here about Syrians fleeing the bombing of the Syrian regime backed by Putin. We’re talking about Europeans leaving in cars that look like ours to save their lives.”

Halabi said the T-shirt initiative was an attempt to use satire and mockery to send a clear message against negative perceptions and traditional stereotypes in the western media.

“But I decided let’s just do this, let’s make a joke out of something really serious,” she said. “The whole objective of the T-shirt was to say we are not uncivilized. What’s happening is racist, it’s unequal and it is very inhumane.”

Halabi said solidarity and compassion towards refugees shouldn’t be based on the colour of their skin, their nationalities, or any other insignificant considerations as they have all gone through tough experiences.

“Nobody asked to be in this situation, and everybody deserves to be treated equally whether you’re from Ukraine or Syria or Somalia or Yemen. They all deserve the same type of humanity as the Ukrainian people,” she said.

The Arab and Middle Eastern Journalists Association (AMEJA) has issued a statement condemning and rejecting the “orientalist and racist implications that any population or country is “uncivilized” or bears economic factors that make it worthy of conflict,” AMEJA said.

Jamal Rayyis, vice president of AMEJA, told Humber News that the racist statements that have been made by some foreign correspondents in their coverage of the Russian invasion of Ukraine have reflected the deeply rooted biases within western news organizations.

“They seem to speak spontaneously, and I don’t think that they had a necessarily ill intent from what they said, but it revealed some really unconscious biases about how they view the world,” Rayyis said.

He said journalists should be aware that the way they report the news plays a major role in shaping policies that either positively or negatively impact the decision-making process.

He said the negative representation of refugees from Syria and Yemen, on the other hand, is deterring leaders from offering humanitarian support for these people in the same way they do to Ukrainian refugees.

“If refugees from Syria or Yemen are regarded with suspicion as a danger then the pressure for doing the right thing in terms of humanitarian efforts is far less, in fact, it’s negative,” Rayyis said.

Analyzing the racist discourse in the Western media away from the official discourse of government figures, parliamentarians, and politicians won’t make any difference as they are so correlated, said Haytham Nasser, a journalist and international affairs researcher.

“We don’t usually hear such discriminatory comments only from journalists as they also come from government officials,” Nasser said. “Some of these journalists either intentionally or unintentionally expressed their understanding of their governments’ policies and the things that their politicians used to say.”

He said most media outlets are controlled by those in power or those who use their money to influence editorial decisions, leaving journalists with no real choice.

“Journalism or media is becoming more of a tool in the hands of whoever has power. It could be money, it could be political power, it could be decision-making power,” Nasser said.

Halabi said the sole objective of her initiative was to tell the world that all human beings suffering in wars deserve an equal chance to survive no matter whether they have “blue eyes” or not.

“I believe everybody deserves the same equality whether you’re from Ukraine or Syria or any country,” she said. “Even Russian civilians in Russia who don’t believe in the war either. Everybody should have the same chance of humanity.”