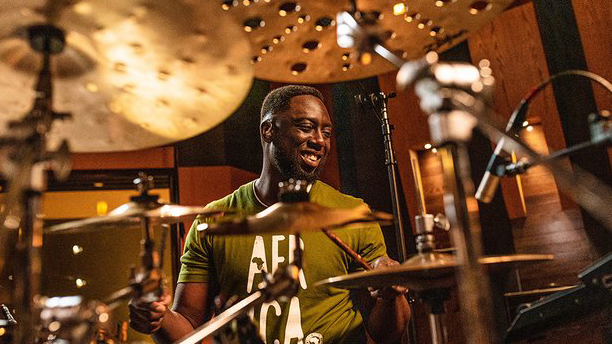 Larnell Lewis, a Humber music faculty member and alumni, will sit in with the 8G band on Late Night with Seth Meyers on NBC from March 14-17.

Lewis said he always wanted to play on the show and was excited when he got the call.

“I had a vision board and I’ve wanted to check off playing on the show,” he told Humber News.

“They saw me on Drumeo and that was a way for them to see what I do.”

Without a regular drummer, the 8G band has enlisted a long list of guest drummers throughout the years.

This week, Tom Sucherman, drummer for the band Styx, will be sitting in. He’s also on Drumeo.

Lewis said after he and the producers confirmed the dates, he started preparing. He received numerous Dropbox links.

“It would include the intro and the outro,” he said.

“It also included the music to play heading into a commercial break and music for when the guests get introduced.”

Lewis said on Monday he’ll be meeting with the 8G Band to write original music to play on the show.

“We get to make music and play it on the show,” he said.

“It’ll be exciting to see what we come up with.”

Connor Ross, a Bachelor of Music student, said he was happy when Lewis’ dates were rescheduled.

“Larnell is a really great drummer and for him to have an opportunity like this is awesome,” he said.

“I’m definitely going to tune in and watch.”

“It’s such a great opportunity for Larnell,” he said.

“I’m really excited for him to experience this. It’s not every day something like this comes along. So I think the prestige of the drummers that have played really makes this an even bigger moment.”

Lewis, known as being a quick study when it comes to learning new music, said that it not only helps with his sit-in but also with his music.

“I think it’s beneficial as a musician because I’m able to diversify my skills and I think that is very important in the industry,” he said.

“I’m thankful that I’m recognized for that.”

Lewis is currently working with Snarky Puppy, a three-time Grammy-winning band, on a new live record as well as his new record titled Empire Central.

“Empire Central is about the musicians and the essence that has come out of Dallas,” he said.

Late Night with Seth Meyers airs weeknights at 12:35 a.m. ET on NBC and on Global TV in Canada.