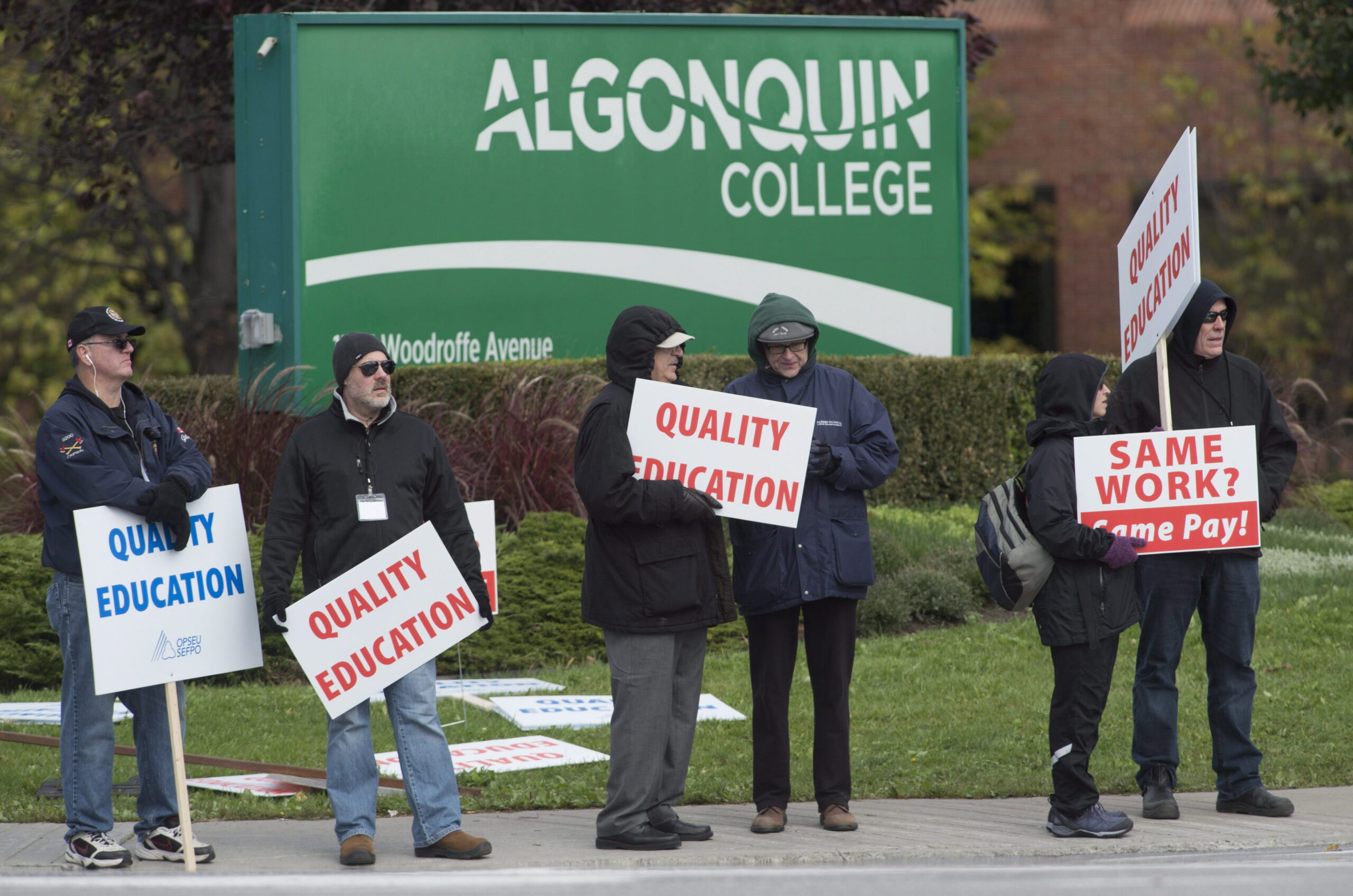 Ontario college faculty will be meeting with management on Thursday in a last-ditch effort to avoid a strike set to begin on Friday that would disrupt classes for hundreds of thousands of students.

The faculty’s Ontario Public Service Employees Union said Wednesday that the College Employer Council, which represents college presidents, has agreed to its proposal to meet without preconditions.

“If real progress is being made, we are willing to extend the strike deadline,” OPSEU added in a statement.

The CEC stated it asked the union to return to the table after a government official said some of the OPSEU demands contravened provincial law limiting wage increases to one per cent.

The employer council confirmed that its bargaining team will meet virtually on Thursday with OPSEU and a Ministry of Labour mediator.

OPSEU gave the employer council until 12 a.m. on Friday to enter into voluntary binding interest arbitration or faculty would hit the picket lines and classes would be cancelled.

The CEC has refused the union’s request for third party arbitration that would likely find a middle ground between the two sides.

Instead, the colleges want selective arbitration that would see an arbiter choose between the entirety of either side’s proposal.

For Humber College student Keren Dray told Humber News she is hopeful a strike will be avoided with the last-ditch negotiations as parts of her program has already been delayed due to COVID-19.

“We already had our program deferred and missed our professional internship which are critical for our development as future practitioners,” Dray, a traditional Chinese medicine student, said.

“Every break is causing serious loss of material due to the inconsistency,” she added. Previous delays due to COVID-19 have forced her to stay an extra year at Humber.

“We are all very stressed and worried.”

Bargaining for a new collective agreement broke down last November as both sides accused the other of leaving the negotiation table.

Faculty have been engaged since the end of the fall semester in escalating work-to-rule job action that meant professors could not work outside their specifically-contracted hours.

OPSEU’s academic division last went on strike in 2017 for a record-breaking five weeks before binding arbitration was imposed by the then-Liberal government in Ontario.

Faculty and the colleges have been under increasing pressure from students and the Ford government to finish negotiations for a new collective agreement, the document that outlines the general contracts between the faculty and management.

The provincial College Student Alliance, Humber College’s student association IGNITE and other groups have called on the two sides to work together and avoid further disruption to college education.

Provincial officials have also chimed in to encourage a resolution.

“I don’t like when anyone goes on strike, especially in these conditions when we went through such tough times,” Premier Doug Ford said on Tuesday.

‘You will not lose your semester’

A Humber College dean addressed concerns that students will not be able to fulfill their academic requirements in time should a strike occur.

“You will not lose your semester if a strike occurs,” Guillermo Acosta, the dean of the Faculty of Media and Creative Arts at Humber, said in an email message to students this week.

“I want to assure you that all students will have the opportunity to achieve their learning goals in as timely a manner as possible,” he wrote.

Humber College maintains that students will be able to finish the semester.

“We will ensure that all students have the opportunity to achieve their learning goals in a timely manner,” the college said in a statement on Tuesday.