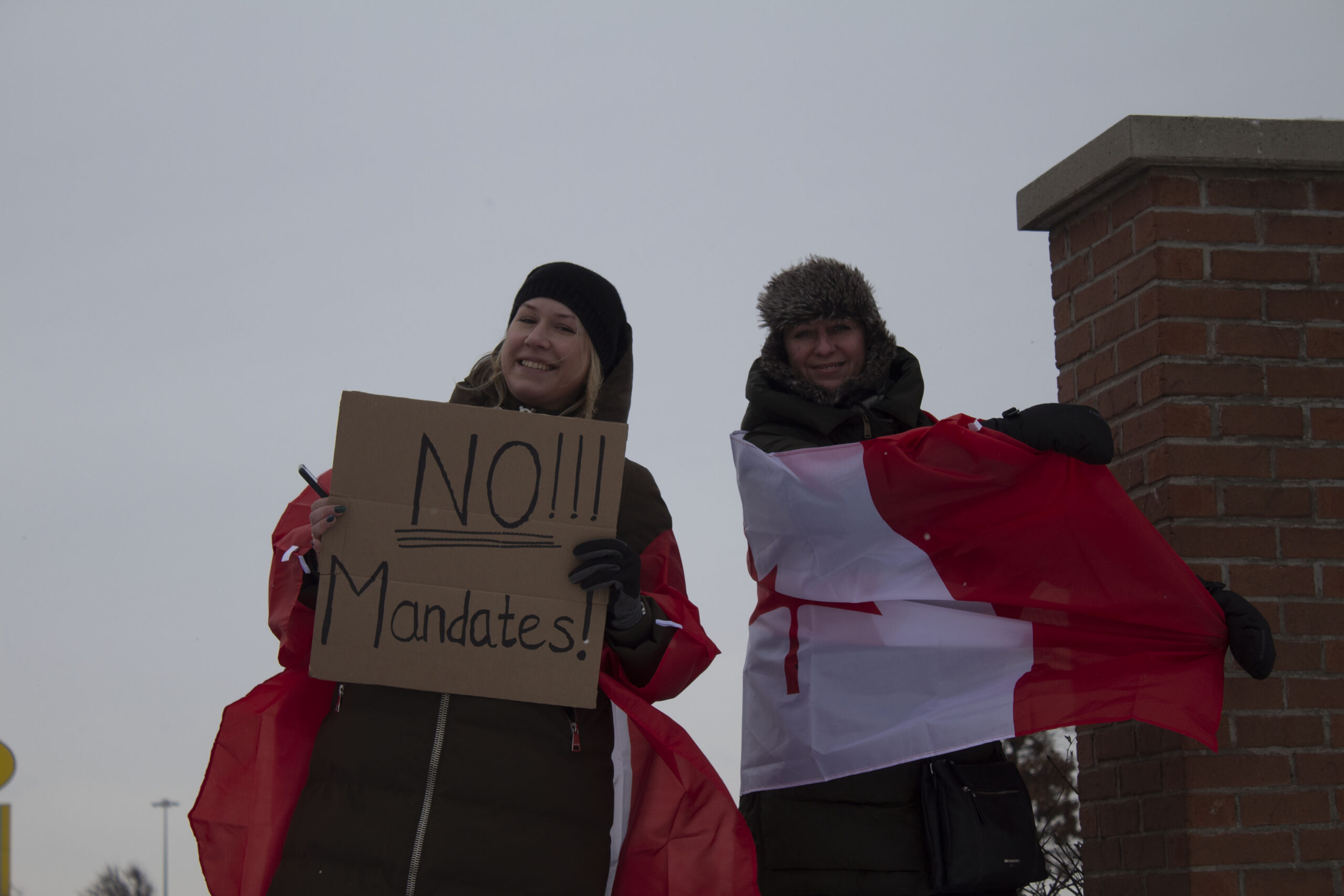 When Aaron and Kailey Stanley brought their five children to the trucker’s convoy, they weren’t prepared for the crowd.

“It’s the most beautiful thing I’ve ever seen. It makes me so proud that our truckers know they have our full support,” Aaron said.

Hundreds of people gathered at the Vaughan Mills Premium Outlet and bridges covering Highway 400 to cheer on those joining the “Freedom Rally,” the truckers’ convoy headed to Ottawa on Jan. 27.

The convoy is in part to protest the recent vaccine mandates banning unvaccinated truckers from crossing the Canadian–American borders.

Though the convoy is in protest of the mandates for truckers, many have expressed their vexation with mandates and restrictions put in place since the COVID-19 pandemic started two years ago.

Marco Beghetto, vice president for communications with the Ontario Trucking Association and Canadian Trucking Alliance, said the Alliance does not support and strongly disapproves of any protests on public roads, roadways, highways, and bridges.

“We believe such actions, especially those that interfere with public safety, which we consider to be paramount above anything, or not, disagreements with government policies should be expressed,” Beghetto said.

A voluntary two doses of Moderna, AstraZeneca, or Pfizer-BioNTech, evolved into a national requirement, a vaccine pass to show proof of immunization and a recommended third booster. Children aged five to 11 are also being vaccinated.

“People are tired of it. Two years in and things are just going from bad to worse. Trust the science but science has been wrong this whole time,” supporter Anastasia Euginy said.

Joined by her sister Irena Euginy, they cheered and danced with their signs to show their support despite the -30 C temperature with the windchill.

The rally’s attendees, both vaxxed and unvaxxed, felt people were being forced to take the jab to continue everyday life, such as attending work or school. The unvaccinated are prohibited from entering places including gyms, restaurants, or places of recreation. Though there are certain medical exemptions, many argue that they are hard to come by.

Quebec recently announced the unvaccinated are prohibited from entering big box stores unless waiting for staff to accompany them to the pharmacy and back.

“We’re against all the mandates, we’re against the masks. We just want freedom for our family, and everybody else,” said Kailey Stanley.

Several convoys arrived in Ottawa on Friday afternoon hoping parliament would remove restrictions and mandates that many feel are a violation of basic human rights.

Organizations such as the Ontario Trucking Association and the Canadian Trucking Alliance have expressed concern over the protests turning violent or unruly. Supporters say if there is hostility, it isn’t from them. Violence is not their mission.

However, images of Nazi and Confederate flags have overshadowed the protest, causing many to question the motive of the convoy itself. There have been reports of homeless shelter staff being harassed for food.

The Terry Fox monument was defaced and at a time of reconciliation, Indigenous appropriation made an appearance.

Though many social media posts have demonized these groups and hope to disassociate the convoy from white supremacy, the tone of the convoy has changed from the initial starting point.

“It’s about 20 years from now when it’s 2042 and we’re doing documentaries,” Stanley said. “I’ll go look my kids in the eye and say and I did everything I could.

“I stood in the cold so that I wasn’t silent,” he said.