People rally in Toronto to support Ukraine amid Russian aggression 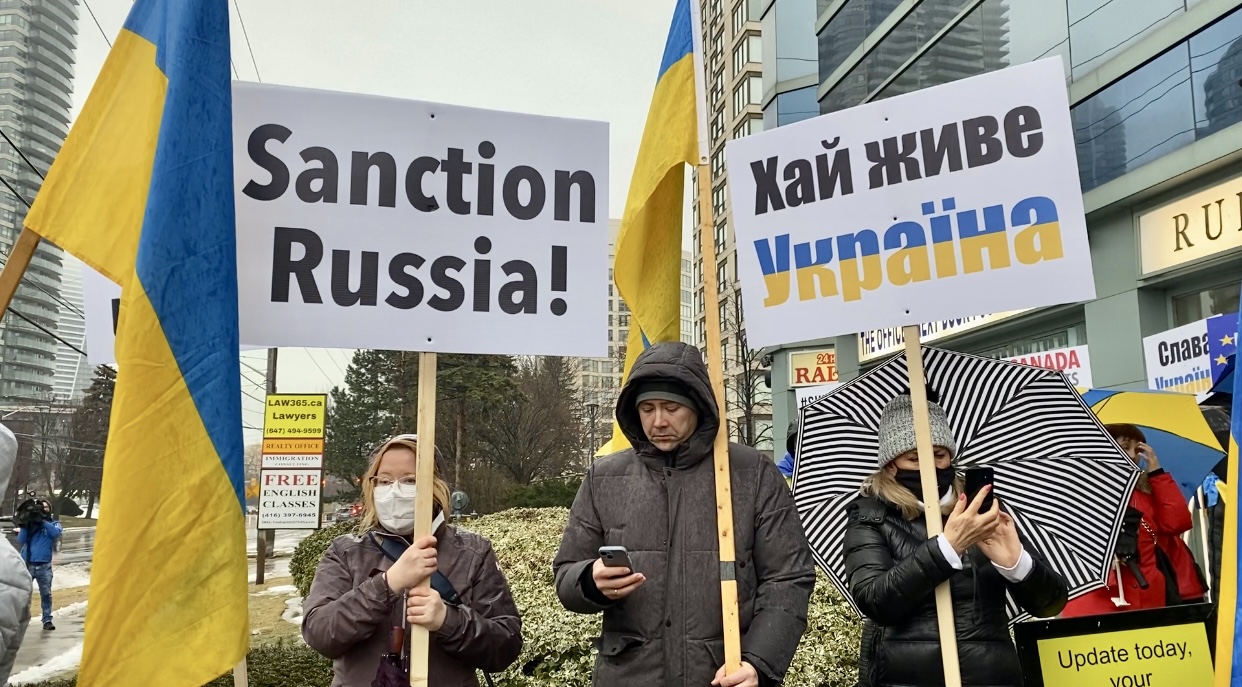 While Russian President Vladimir Putin is sending troops to eastern regions of Ukraine, people in Toronto gathered in front of the Ukrainian consulate on Tuesday to show their support for that country.

The rally was held under the Stand with Ukraine action, founded by the Ukrainian Canadian Congress. This was the second rally in Toronto; the previous one had been held in front of the Russian consulate.

“I really wish none of us had to be here,” said James Maloney, the MP of Etobicoke Lakeshore.

“I was praying that we would not have to gather again when it became real,” he said. “Well, it is real.”

Putin signed the presidential decree the day before, recognizing two eastern breakout regions of Luhansk and Donetsk of Ukraine independent.

“This decision was the final mask torn off,” said Olexandr Shevchenko, the Consulate General of Ukraine in Canada.

In the meantime, tension in Ukraine continues to rise with many people worried that Russian troops might invade further in the country.

In a video posted on Instagram, Ukrainian President Volodymyr Zelensky said he is calling up reservists for a special period of time to get ready for any possible escalation.

In Toronto, around 200 people gathered in the rain with blue and yellow umbrellas, flags and patriotic posters in a display of Ukrainian unity while calling on the Canadian government for further action.

“The House of Commons is united in the purpose of standing with Ukraine,” said Maloney.

So far, Canadian investments in support of Ukraine include extension and expansion of Operation UNIFIER, providing up to $620 million in loans and providing $10-million-worth of lethal and non-lethal weapons and ammunition.

“We’ve talked about sanctions, operation UNIFIER was renewed and enhanced, sovereign loans were provided to the governments, you asked for lethal weapons – they arrived in Ukraine two days ago,” Maloney said.

In addition, Prime Minister Justin Trudeau has approved sanctions aimed at members of the Russian parliament who voted to recognize the separatist regions.

“We understand that the sanctions in Ottawa are just the beginning,” Alexandra Chyczij, the President of Ukrainian Canadian Congress, told Humber News after the rally.

“We must avoid the worst plans of Putin and apply the most harsh sanctions possible,” she added.

The speakers at the rally emphasized the importance of Ukrainian security to Canada and to the whole world.

“We have 190,000 Russian soldiers on Ukrainian borders, and the number seems to go up every day,” said Etobicoke Centre MP Yvan Baker.

“This is a threat not only to Ukraine, but also to Europe’s security and world’s security.”

Not only Ukrainians came to the rally – there were representatives of different nations, including Poland, Lithuania, Belarus, Hong Kong,

“Hong Kong Canadians share with Ukrainians the commitment to democracy, freedom and human rights,” said the President of Canada-Hong Kong Link Gloria Fung in her speech.

“Democracies of the world need to stand with Ukraine in this courageous fight against Russian invasion and preservation of national sovereignty and values,” she added.