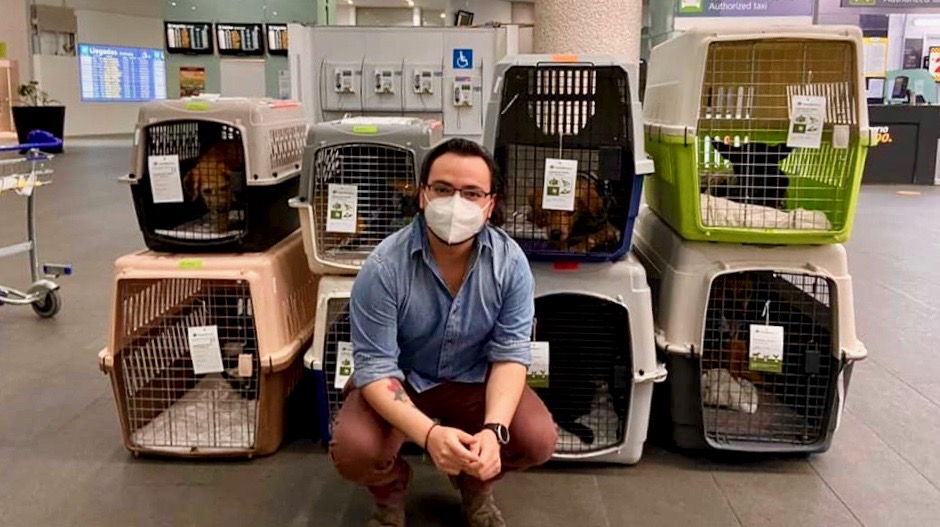 MEXICO CITY – Merlina was so afraid that she hid in the corner of Emily Erickson’s house, refusing to come out. The mutt grey puppy didn’t even join two other rescued dogs living with her to play.

Merlina will need some time to get acclimatized to her new home in British Columbia, thousands of kilometres from where the little dog was found abandoned inside a garbage can in the city of Puebla, about 135 kilometres southeast of Mexico City. She was rescued by a local shelter and flown to Victoria to be fostered at Erickson’s home until she could find her forever family.

Erickson is the founder of Rosier Days Dog Rescue Society and works with volunteers in Mexico flying dogs, like Merlina, to give them a new loving life.

“I worked with her every single day,” she said. “Slow integration into the family, petting her, feeding her treats and at the fourth month mark she just started to show progress, finally.

“She has the most wonderful family,” Erickson said.

This wouldn’t be possible if it wasn’t for travelers that volunteer as “flight parents” going from Mexico City to Toronto, Vancouver, Montreal or Calgary and register the dogs under their name on the flight.

The Dog-Go Project is one of many Mexican non-profit organizations that takes care of the process at no extra cost for the flight parent.

Gabiria Abdala, founder of the project, said that although there are ideal living conditions in her shelter in Puebla, dogs need the love of a family or else they’re inside a “jail.”

Abdala said they work with different Canadian charities that receive the dogs from flight parents at the airport and put them into temporary homes until they find a suitable family for them.

Barbara Harrison is the director at one of those shelters located in Toronto called Paws Across the Water.

“Rescuers are overburdened and struggle to feed and care for the number of dogs in their care,” she said. “Moving dogs out of shelters also gives the rescuers the capacity to take in more dogs, so the flight parent is actually helping two dogs for every dog that flies.”

Travelers that want to volunteer need to fill out a survey posted on The Dog-Go Project website with their flight information and wait for confirmation. They will receive instructions to meet at the International Airport of Mexico City where someone from the organization will accompany them to add the dogs under their tickets.

Arriving in Canada, the flight parent would pick up the dogs at the oversized luggage area where they pay a refundable tax. Then go out to meet someone from one of the Canadian charities.

Harrison said without the flight parents the only other option would be to send dogs via cargo, where they are booked on their own ticket, and the cost is unsustainable for the shelters.

“It’s so little effort for the flight buddy,” she said. “It’s so easy and yet it gives all these dogs and new possibility.”

Harrison said she has flown many dogs and it has been “such a fulfilling experience.”

The rescuer once flew a dog that uses a tripod, a prostheses for a missing leg, and now goes swimming in the lakes in the summer and climbs mountains with his forever family.

“He changed my thinking about what’s possible for a dog that lost a limb due to an unfortunate start in life,” Harrison said. “I love seeing him living this amazing life.”