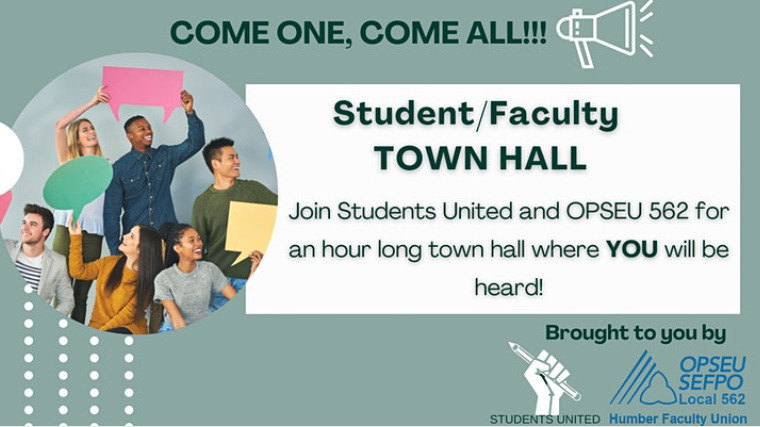 “One of the main things that we want with the town hall is for the messaging to be consistent,” said Azi Afousi, one of the organizers of Students United. “We’re promoting this collaboration between students and faculty, because if two groups are divided, they’re not going to achieve anything.

“We’re going to come together so that we’re not conquered, we want to work together,” Afousi said.

Students United, a new body of student advocates, has emerged as an influential voice in recent weeks, and has taken the fight for students straight to the college.

The organization has gathered a large number of supporters, more than 5,000 students and some faculty members, bringing them into contact with the faculty union. They hosted the town hall to outline their objectives and ideas for next semester, calling for more transparency and increased accommodations for hybrid learning.

The open forum town hall was attended by prominent leaders including Students United leaders Carolina Breeze and Afousi, faculty union acting president Milos Vasic, along with many other students and faculty members. Beginning with a briefing, the hosts outlined their goals.

A concern repeatedly brought up by staff and students was communication, especially proposed changes suggested by the college to the amount of in-person learning. The faculty were not advised of the proposal — which would reduce online classes to 65 per cent from 80 — until the students balked.

“The town hall was really focused on, you know, promoting transparency and communication,” Vasic said. “What’s the rationale for that, 65 per cent in-person and 35 per cent online?

“Just be transparent with it,” he said. “That’s something both us and the students want answered.”

Students United challenged the college with a petition campaign, garnering more than 4,000 signatures, and the college reversed its stance.

Miriam Novick, a Humber English professor and chief union steward, said the union was eager to reach out to Students United because nobody told OPSEU the 80 per cent online portion had turned into 65 per cent within two days.

“And further, from our understanding, there has been no concerted effort to either establish what areas that’s happening with to correlate to any trend and with any transparency,” she said.

Students United and the union also laid out mutual goals and shared questions they had regarding the administration and the future of the college.

These included whether there will be distancing measures in place for the next semester if classes are returning to in-person, as well as how students were supposed to adjust to the short notice decision, as many have full-time jobs to make ends meet or cannot come on campus due to COVID-19 or other medically related complications. The meeting opened up to hear directly from staff and students, who shared their opinions and grievances.

All sides of the argument were heard, some pro and some against in-person learning, but the overwhelming majority of students present favoured continuing remote learning.

Students United emphasized it was not seeking to take away in-person learning, but to leave the choice to students so that they are in control of their own learning.

“We don’t want to take away and shut down the school again,” Afousi said.

Breeze said the group stressed the importance of student input and choice.

“We always use the word choice. But at this point, it’s not only about choice,” she said. “These are not people who just want to sit in the comfort of their home, and do it as comfortably as they can.

“We’re talking about the need to finish our studies and to receive the education people came for,” Breeze said. “We pay thousands and thousands of dollars, especially international students.”

Students United support has continued to grow in numbers, and is having an impact on some of the decisions at Humber. The administration is listening and is working to accommodate where they can, but as a business and large college, it isn’t always easy to quickly alter policy and plans.

But what is clear is that Students United has caught the attention of IGNITE as its CEO Ercole Perrone was in attendance.

Students United plans to continue working with the Faculty Union into the next semester.