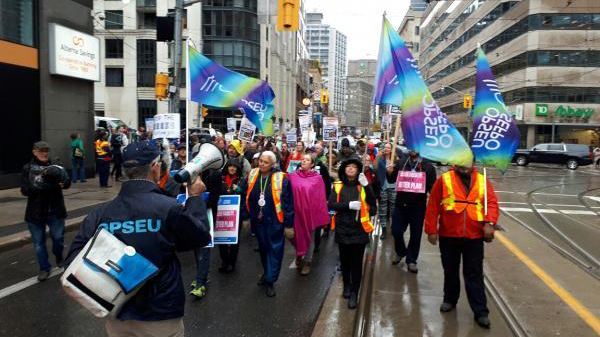 The Ontario Public Service Employees Union’s college faculty wing approved labour action options in a vote Saturday with 59 per cent of the union members in favour.

Faculty will start with work-to-rule labour action on Dec. 18, meaning the faculty will follow their employment contracts to the letter.

The faculty bargaining team offered to extend the current collective agreement until at least Jan. 3, a proposal the employer council rejected.

The council, which negotiates on behalf of the colleges, imposed rules known as “terms and conditions” starting this week that stand in as the collective agreement until a new agreement is sorted out.

While many of the forced employment terms are what union bargaining head J.P. Hornick calls a “pizza party,” Humber’s OPSEU Local 562 President Milos Vasic said it hardly touched on what the faculty are looking for in a new collective agreement.

“The environment that we’re in now, they can say and do whatever they want,” Vasic said of the employer terms.

As for what comes next after work-to-rule, Vasic called that the “million-dollar question,” but emphasized faculty are still looking to avoid a strike.

OPSEU’s academic CAAT-A wing and the colleges were last at the bargaining table in November before talks broke off after conciliation failed.

Faculty went on a record-breaking five-week strike in 2017 after they were unable to negotiate a new agreement with the colleges.

They were eventually legislated back to work by the then-Ontario Liberal government through binding arbitration that awarded the faculty much of what they asked for.