EDITORIAL: When it comes to strikes, it doesn’t matter who wins — students always lose 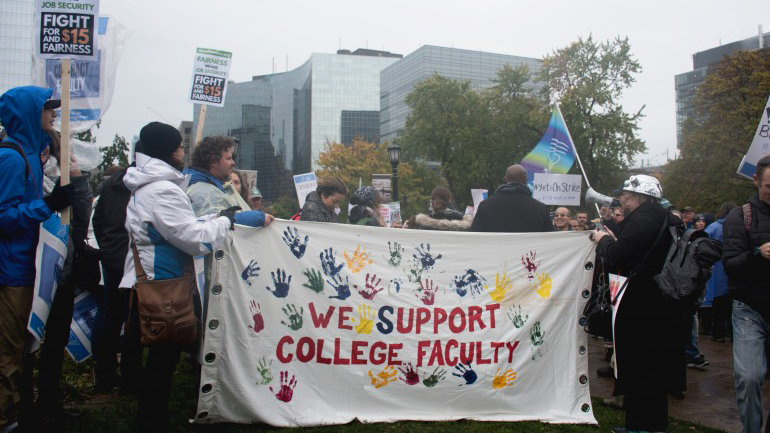 For students, the most frustrating challenge they face should be passing their classes. But there is another thing that every student dreads. It’s one short sentence.

“There’s going to be a strike.”

There are ongoing disputes between the union representing college instructors and the Ontario government. As it stands, negotiations are expected to resume soon, and there hasn’t been much word on what could happen next.

Students, already facing the anxiety of a pandemic, found it difficult where to find out what the disputes are about or why talks broke down.

So the worry about a potential strike is added atop a growing mountain of burdens the current cohort of post-secondary students has had to bear.

The pandemic forced students to pay full tuition to study completely online for a year, an experience that left many feeling isolated and unsupported. The contemporary economy is an unwelcoming place. And the cost of living is soaring.

Consider the college strike in 2017, a five-week ordeal that left close to 500,000 students in limbo as staff walked picket lines. Students were in the dark as they were left without classes, refunds or a voice during the strike.

Learning was put on indefinite hold while the strike dragged out. Students lost five weeks of education with not much change when they came back, and they never got a chance to represent themselves.

When students hear the word strike, the first thing that pops into their minds isn’t what the union claims to be fighting for, but rather a sigh of resignation, because school is about to be closed, meaning all that hard work and tuition may have been wasted.

With a strike, students are at the mercy of politicians and unions. It’s frustrating to know you’re a pawn in a larger game, because students don’t usually get a seat at the table.

Students have a pessimistic view on strikes, and for good reason. They aren’t privy to what’s happening. They could be going to school one day, then simply locked out the next.

Now they’re in the same situation again, only four years later. Students didn’t know negotiations were underway because of a media blackout. They don’t even get to watch their futures being debated.

While a strike is still only a possibility, the mere chance of it adds stress and uncertainty to students who have carried more than their share during their post-secondary years.

Transparency would give students a platform to be at least somewhat involved in affairs that certainly involve them.

Closed-door meetings are like friends talking about you behind your back, and none of us likes that. Perhaps if students could watch these meetings, it would put pressure on the parties involved to reach an agreement, because students would know exactly who to blame for a strike if negotiations fell apart.

It would definitely encourage participants to think of students’ needs and concerns, which as most students could likely recall, was a promise that was made to each and every one of them when they first enrolled.