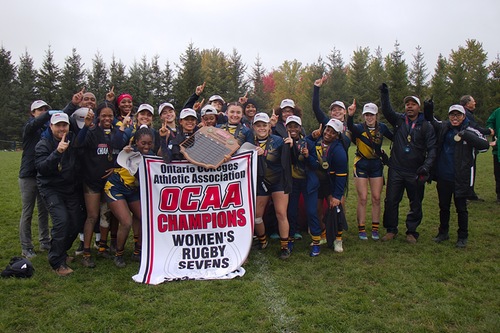 Dale Essue, head coach of the Humber Hawks women’s rugby sevens team, had a wish for how the Ontario Colleges Athletic Association final against the Durham Lords would unfold.

“Going into it, the thing you want to do as a team is score first,” Essue said. “It really sets the tone, then puts the pressure on the other team.”

Within the first two minutes, Essue’s dream came true as Essence Palmer-McCarthy outran four Durham defenders for a try, sending the Hawks on their way to a 36-14 rout of the Lords on Oct. 30 at Thompson Park, winning their third OCAA championship.

“Setting the tone from the start and being able to put that try down for my team really gave us that confidence, that, ‘okay, we’re off to a great start, let’s continue and build on to it’,” Palmer-McCarthy said.

Essue said the Hawks were prepared throughout the showdown with the previously undefeated Lords.

“I always ask them to do what we call a ‘squad analysis,’ we look at the teams and assess the strengths, the weaknesses, opportunities and their threats,” Essue said.

Palmer-McCarthy, the 2021 OCAA’s most valuable player, said the championship was a great way to cap her Humber career.

“This was my final year at Humber so I really wanted to give it my all,” she said. “My goal was not to win any awards, we all had goals that we set before the season started.”

Not long after Palmer-McCarthy got her try to open the scoring, Alicia Hayes recovered a turnover and passed the ball to Sarah Brothen for another score, giving Humber a 10-0 lead.

A couple of minutes into the second half, team captain Daniella Grant scored her third try of the post-season on a pass from Renee Bowen.

“We knew that if we could win that game we would be pumped and ready for the finals and everyone was doing their job,” Grant said.

“I don’t think there were any tweaks needed to be made, it was more just keeping that focus and keeping in that zone to be prepared for the finals,” she said.