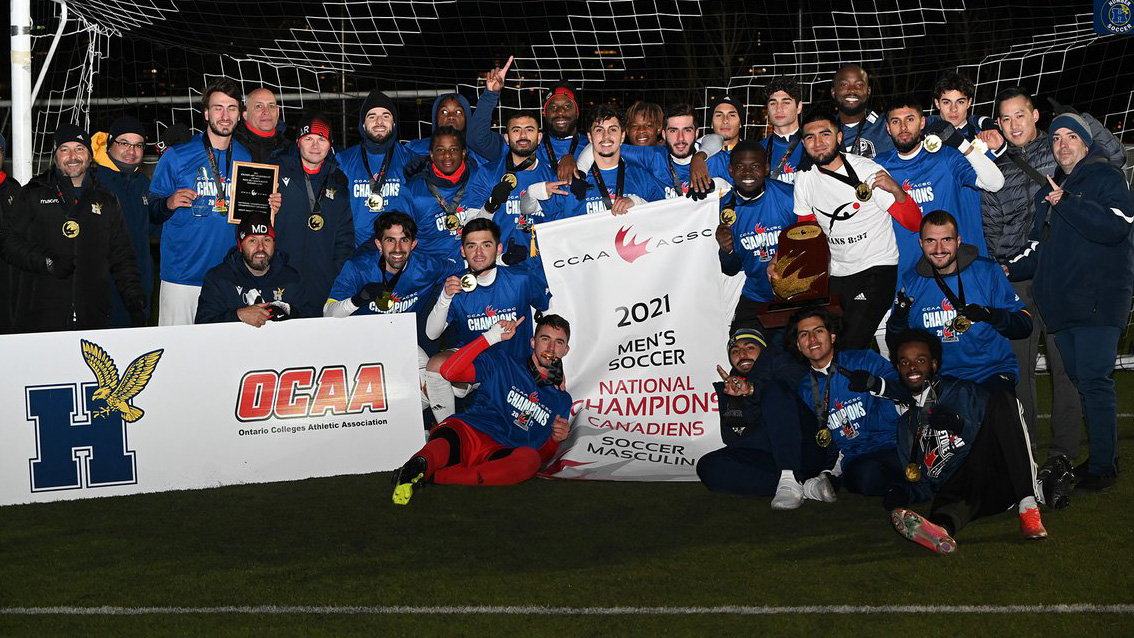 The Hawks won their eighth national men’s soccer title at the 2021 CCAA National Championship against the Douglas Royals with the help of “the three musketeers,” players Exosse Kadiebue, Luca Gasparotto and head coach Michael Aquino.

The clock was ticking for the Westminster, B.C., Royals as the Hawks took merely 10 minutes to score. Rookie forward Kadiebue tackled the opposite team’s defensive line and buried a shot at the bottom corner of the net, making it a 1-0 game. The Hawks defended their lead and won the game.

The victory gave Humber Varsity 54 CCAA national titles, the most among Canadian colleges.

“It felt surreal. To accomplish the goal set out at the start of the season and in the way that we did was amazing,” fifth-year defender Gasparotto said.

Gasparotto was awarded the CCAA Exemplary Leadership Award and named to the all-tournament team, an award given to players who performed the best during the championship.

He highlighted the team’s hard work, chemistry and strong connection as elements that helped them win the game.

Gasparotto, who is majoring in urban arboriculture, has represented Canada since he was a teenager and was called up to the senior squad during the World Cup qualifier in 2015. He also has the 2021 OCAA League All-Star to his name.

“Aquino and Humber have done such an amazing job with the program, building a dynasty that competes every year,” he said. “It was nice to be a part of it all and also share my experiences with them and the players to hopefully help them in the future.”

The Royals put up a fight but Humber’s defence blocked every potential goal. They almost found an equalizer when their free-kick went into the box, bouncing toward the goal. However, senior Michael Fayehun made a sprawling save, clearing the ball from danger.

Fayehun was named the championship MVP. The match took place at Coho Commons Field on Nov. 13.

Gasparotto’s last year at Humber will be 2021-22, before he graduates.

“The team is definitely in great hands and I have no doubt the dynasty and success will continue for many years to come,” he said.

The championship win became the fifth title for Humber under Aquino. He started as an assistant coach and was promoted to head coach in 2013. Aquino has also received the OCAA Division Coach of the Year award for three consecutive years.

“We built such a great program, especially over the last 10 years, that has seen the program go from a provincial powerhouse to a national contender year in and year out,” Aquino said.

Gasparotto and Aquino described the after-win celebration. While Aquino was more modest about the celebration, calling it “nothing extravagant,” Gasparotto was overwhelmed with joy.

“I couldn’t remember a time where I celebrated that hard after a game with my teammates on the field, but it was just a great feeling and sense of accomplishment,” Gasparotto said.